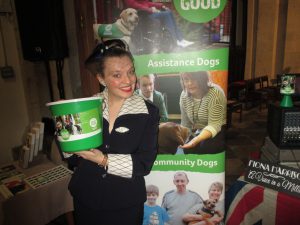 Collecting for Dogs for Good!

Firstly I’d like to start by thanking every-one who came down to All Saints Church on Tuesday to hear Paul and I sing for “Dogs for Good”. We made £177.84 which will be going straight to the charity and it was lovely to see Alvin who made a special guest appearance with his puppy carer and handler Annie Rourke. We had a lovely day and it was wonderful to see so many friends. So thank-you every-one for your fantastic support! 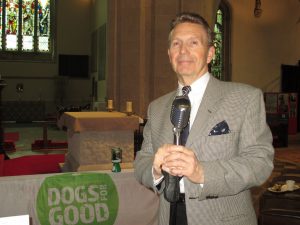 week. This Saturday I’m working down in Kent for a 1940s Time Travelling Tea Party which is taking place at Tatsfield Village Hall. I still need to prep my ATS uniform and polish my brass buttons and then on Sunday I’m in Cambridgeshire performing the Swinging 50s and 60s before heading off down to the South coast. I’m fully booked next week and then back up to Wellingborough Golf Club for a private party on Friday when I’m down to perform the music of the 1930s through to the 1970s. It’s full steam ahead and I have so much to get straight and done before I hit the road. 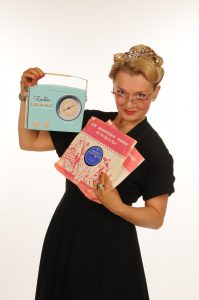 Getting Ready to Go On Air!

If you have been following me on facebook you may have seen on my pages that I’m going to be hosting my own music radio show on 1940s Radio. I was approached by the station as they thought I would have the ideal speaking voice for the American market. 1940sradio.com  has a growing following across the pond in the United States and I’ve already put together two pilot shows the first of which is to go out on Tuesday and Sunday at 3.00am – 12.00am and at 7.00pm  GMT. The different times are to tie up the the radio stations international listeners. As yet I don’t know if I will be any good as a radio host but I thought it would be a wonderful opportunity and I wanted to give it a go. I’ve lots of ideas and for my second show I took the theme of the Hollywood movie musicals so we will just have to see how I  get on and if the Americans like me. If you get the opportunity please do tune in to hear me at 7.00pm and hopefully listeners will enjoy my musical choices. 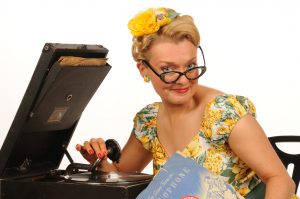 Talking about music I had my first meeting with Mike Moran on Monday as we had a play through and discusses some ideas for my Grease medley. I had a feeling that when I brought along my Grease score he would know the writers personally and sure enough John Farrar is a personal friend along with Olivia Newton – John and so it goes on. I don’t think there is anyone in popular music or musical theater Mike hasn’t worked with at some time or other as the walls of his studio show no shortage of posters of films he’s written the music for.

I can’t wait to hear Mike’s first draft of the medley although quite what his fee is going to be I’m still not quite sure. However to have the chance of working with someone of his ability and talent was too good an opportunity to miss and I hope to have the medley done for May. I’m also seeing Richard at the end of the month where I hope to commission another couple of songs for later in the year.

That’s all my news for now and I’m afraid I wont be able to blog again until I get back after next week. In the meantime don’t miss my radio show!