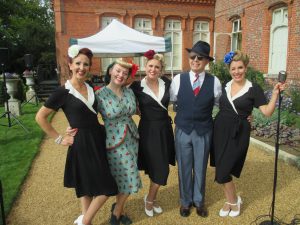 Paul and I on Stage with the Polka Dots!

If you are a regular follower of my blogs you will know just how busy I’ve been these last three weeks with the run up to Battle of Britain and RAF 100. I can’t quite believe it myself but last week I performed a staggering 13 shows in 7 days and I’m only just beginning to catch up with my e-mails and paper-work. This is why I’m a little behind with my blog.  It’s been an amazing week flying from show to show and I’ve so much to tell you all.

From “Proms in the Park” last Saturday to now I’ve been out every-day performing WAAF shows. Last weekend Paul and I had the privilege of 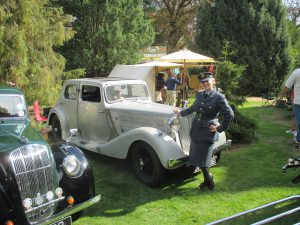 Out and About on the North Lawn!

performing for the National Trust at Hughenden Manor which during the war from 1941 – 46 was home to a secret map-making base code-named Hillside. Over 100 men and women worked at Hughenden making maps to support the RAF pilots and nearby Bomber command. This highly secret operation helped turn around the outcome of the war. High on Hitler’s hit list Hughenden Manor was ideally chosen at it’s difficult to spot from the air due to all the surrounding trees.

Last Saturday and Sunday the Manor came alive with History tellers, vintage vehicles, re-anactors and entertainers as we all worked together in our 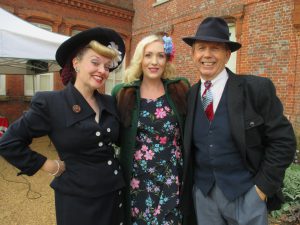 Paul, Marina and I at the Parterre Stage!

special fields to re-create the history of the 1940s. This was my 3rd year at Hughenden and it’s thrilling to see an event go from strength to strength.

Usually a busy weekend at Hughenden attracts between 800 to 900 visitors but last weekend broke all box office records attracting 1734 people on the Saturday and a staggering 2423 visitors on the Sunday. Not only did we have record numbers through the gate but fantastic weather and at one point all I could see on the Parterre lawn was a sea of people. All soaking up 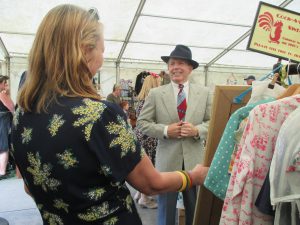 the wonderful atmosphere enjoying Punch and Judy while waiting for the fly past, which this year included a Spitfire and Hurricane. We also had a special visit from Station Commander Robert Woods from RAF High Wycombe who gave a speech from the North Lawn stage.

This year we had two stages one on the Parterre and the other on the North Lawn at the front of the manor. This meant fellow entertainers Marina Mae, the Polka Dots and myself were able to perform at both locations. I had been engaged to host and compere the event, perform two singing sets, one uniform and one glamour plus host a 45 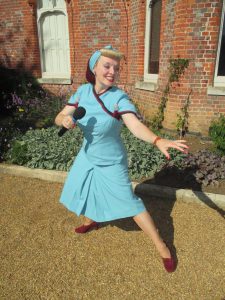 Rehearsing my Moves for the Work-shop!

minute dance work-shop as I took  popular party dances from the 30s & 40s re-choreographing them slightly to fit the shape of the Parterre stage. Paul also performed the music of Sinatra which went down extremely well with the National Trust audience.

I performed my first dance work-shop at Hughenden last year and as it went so well I was invited back to do so again this year. I never like to stand still and it’s great to take on new challenges. This year I included a new Charleston routine which was all about having fun as I taught my audience to create the illusion of crossing their knees just like people did in the 1920s which caused lots of laughter.

A great deal of thought goes into my shows not only musically but costume wise. This year I had my skirts made with extra pleats to accommodate my dancing and sleeves  released from 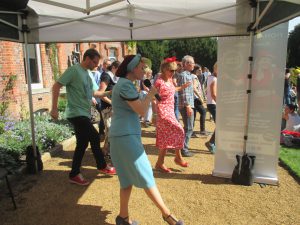 the arm hole so I could stretch my arms with-out upsetting the tailoring of my bodice.  For my glamour sets I wore two very smart suites the first being a Lilly Anne I recently bought on line and came to me from Australia and the second, my purple suite which many of you will remember from my J’Attendrai show-reel. I also wore a pale green dress with birds on it which I had made especially. 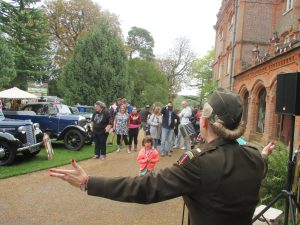 First  Set of the Day on the North Lawn Stage!

WAAF show. The first slot of the day is always the hardest set to perform as many visitors haven’t arrived but come Sunday it was clear early on we were going to have a busy day as visitor numbers very quickly started to grow. I performed different sets both days opening with my US WAC show on Sunday and giving my Glamour show on Saturday a Hollywood twist, where on Sunday I incorporated some sing-along and Lindy Hop favorites “Cho Cho Ch Boogie” and “There ain’t No-body here but us Chickens”.

I always say it’s all about preparing properly and I 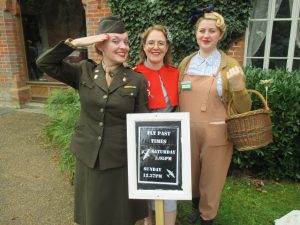 Dressed for the 40s!

don’t mind admitting last week I had some very late nights typing up my show plans, practicing my dance routines, researching the history of the Spitfire and Hurricane so I would have something intelligent to say when they flew over and making sure I programmed  a back-up computer just in case if something went wrong. Fortunately all this hard work paid off as my main computer crashed but thanks to my back -up this wasn’t a problem as Paul continued to sing and I was able to swap the computers in mid set with-out the audience knowing. 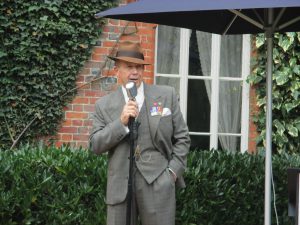 That was a close one but fortunately Paul’s song “Night and Day” is just over 4 minutes long which gave me the time I needed! Phew!  Both Paul and I are really looking forward to next year’s event and a big thank-you goes out to Moria Andrews and every-one at the National Trust who made Hughenden’s 1940s Weekend such a success.

This weekend Paul and I are going to be down in Hastings Bexhill and I can’t wait as Poppy will be coming with us too. That’s all my news for now as 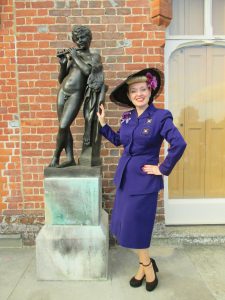 Dressed for my Final Glamour Set!

I must get to bed but don’t forget we will be up in Pickering for the War weekend in October, but more on that later. 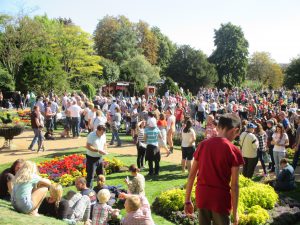