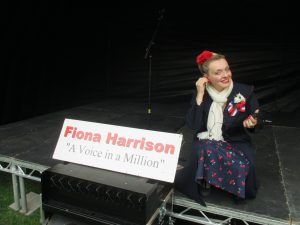 Sound Checking with my Ear Monitors!

If you have been following my bogs and face-book pages you will know on Saturday night I had the pleasure of performing in Dunstable at Priory Park for Proms in the Park. It was a fantastic event as I had been engaged to sing a mixture of Opera, Hollywood movie musicals and wartime favorites just prior to the big screen going across live to the Royal Albert Hall for The Last Night of the Proms. Proms invites a wonderful atmosphere and it’s the one Prom concert of the year where it’s perfectly acceptable to sing along, wave a flags and dress in what ever you like usually sporting a red, white and blue theme. 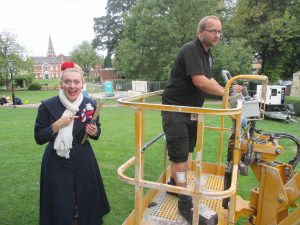 Getting Ready to go up in the Cherry Picker!

Proms has music for every-one regardless of weather it’s classical, jazz, or something more contemporary. The last night is where every-one can let their hair down and enjoy the party while soaking up the patriotic atmosphere.  My sound check was at 4pm and while we were rehearsing it was lovely to see Priory Park filling with visitors.

I’m game for anything and for the first half of the concert I was booked to sing on the stage in front of the big screen which was completely inflatable. I’m seeing this more and more now inflatable stages which are easily collapsible and after the 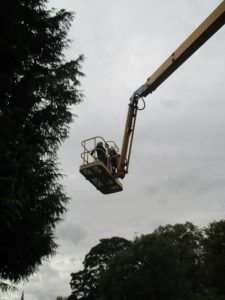 Dunstable Town band finished their set I was straight on for 30 minutes at 6.45pm. For my first set I sang a selection of Hollywood dance tunes from 1950s musicals, The Flower Duet from Lakme’ “It’s Magic” from “Romance on the High Seas”, a wartime sing along selection, a medley from “South Pacific”, concluding with the aria Nessum Dorma.

During rehearsals I was given radio ear monitors which took a little getting use to. I’m not sure if I have funny shaped ears but I always find it difficult getting ear plugs to fit but for this show they were essential. Once the staged had been collapsed after my first set I was set to return during the interval to sing a selection of songs to commemorate the RAFs centenary  and the Great War with “Requiem for a Solider” and popular classics such as “The White Cliffs of Dover” and “We’ll Meet Again”. It had been my intention to sing more from WW1 but after receiving the BBCs play list this could have caused a clash 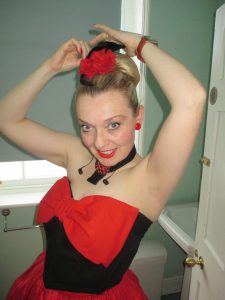 so two  Vera Lynn WW2 songs seemed a better choice and went down extremely well with the Dunstable audience. I also included a selection of songs from the popular West end show “Mamma Mia” which really got the party swinging.

The wonderful thing about my job is I get to preform so many different musical styles in all sorts of usual environments. Once the stage had been collapsed revealing the big screen it then became necessary to fly me in for my second set on a cherry picker.  My Air Force medley was the obvious choice and initially the idea was to have me singing on the roof of Priory Church. However due to all the solar panels this wasn’t possible which became apparent during rehearsals when I was lifted up about 50 feet and sang from the cherry picker for the first time. 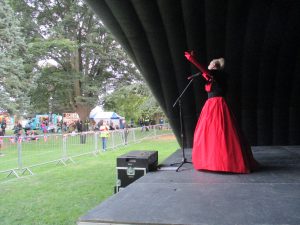 On Stage and in Full Voice!

open stages it’s important to wear big dresses especially when I’m singing Opera that are colourful and easy to see from a distance. I was able to secure the wires to my ear monitors by sliding them under my choker for my first set which went with my red and black evening gown. When it came to flying in for my second set I wore a green evening coat. This is where the ear plug monitors became essential as up in the air I couldn’t hear a thing from the ground. 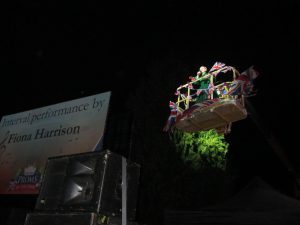 Flying in for 2nd Set with Dam Busters!

theme tune. I had a hand held radio mic and with my other hand I held onto the rail of the cherry picker to steady myself although keeping my ear monitors in wasn’t easy as I also had to wave a flag too . At one point I was down to one ear monitor but I kept going and a great time was had by all. So thank-you to Lisa and Dunstable Town council for engaging me to sing for Proms and afterwards Paul and I stayed to see the fabulous firework display.

Now I’m back home it’s full steam ahead with Battle of Britain week and RAF 100. This week I have a staggering 13 shows to perform in the next 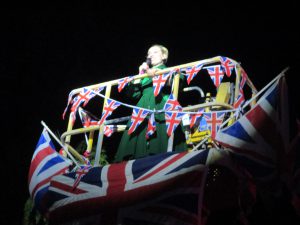 7 days and as you can imagine they are all WAAF shows to tie in with the anniversaries.

This weekend Paul and I will be performing for the National Trust at Hughingdon’s Manor’s 1940s weekend. I’ve been engaged to host and compere the event and to perform 3 shows daily. I’m opening the show at 10.am and at 1.00pm I will be running a dance work shop on the Parterre Stage. Paul will be singing too in the Sinatra style and at 4.00pm we will be closing the show with a grand finally which will be including all the other artists. 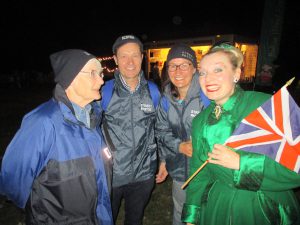 It’s promising to be a fantastic weekend as we have Living history groups and re-anacters and a fabulous line up of artists which include the beautiful Marina Mae and 3 girl harmony group The Polka Dots. We will also be having a fly past on both days which includes a Spitfire on Saturday and a Spitfire and Hurricane on Sunday. For more details about the event click the link below. 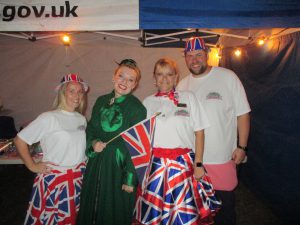 All Set & Dressed For Proms in the Park! 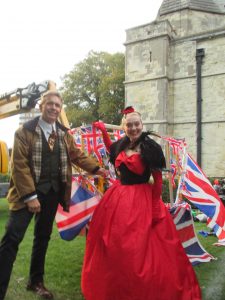 Paul and I with the Cherry Picker!