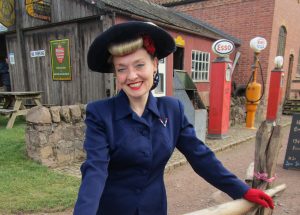 Between Shows at Stonehurst Farm! 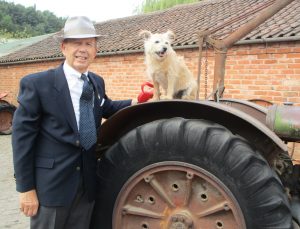 Firstly I’d like to begin my blog by thanking every-one who came to see our shows at the weekend at Stonehurst Farm’s 1940s event. Paul and I performed eight shows over the weekend and it was lovely to be out, catching up with friends and performing the music of the 1940s. Paul and I always enjoy this event as it attracts all sorts of people, not just 1940s enthusiasts but families of all ages too.

It was a busy weekend as somebody told me there were twelve 1940s events going on due to all the rescheduling which has taken place in recent months.  Stonehurst Farm has so much to offer not just for children where they can get up close and feed the animals  but it also has a terrific motor museum, which is always a delight to see. The weekend also attracts lots of re-enactors who bring their military displays and vintage vehicles.

So often with these events I have to stay fairly close to the stage area as I have costume changes and a lot to do in a day. A great deal of thought goes into all my shows and I was pleased to perform a couple of my new arrangements which went down well with the audience. Poppy came 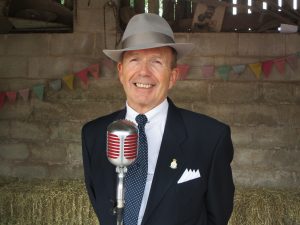 with us too as she is learning to be a showbiz dog although I think she enjoys being a sleep in her basket best of all. She never likes to be too far away from Paul when he’s on stage and she often likes to peep around the corner when he’s singing.

As you can see I’m much later with my blog this week than usual but this month I’ve been extremely busy. I’m often working well into the earlier hours of the morning just to get everything done. I’ve been out performing every day and this week I’ve had press interviews, meetings, dress fittings, recording sessions and a new video to master in between shows. I also 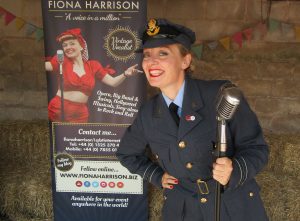 Opening the Weekend with my WAAF Show!

picked up a beautiful 1920s microphone I commissioned from Wendover Wood which I will be using in a film I’m recording in October.

I’m currently working on a new flicker book video of the Cover Girl song “Long A Go and Far Away” with my web-designers Karen and Peter. This video will be documenting my performance at Bletchley Park and Peter very kindly sent over the rushes last night. I employed H100-Photography to take the photos and I have a wonderful selection to choose from. It takes a while to go through everything but the video is 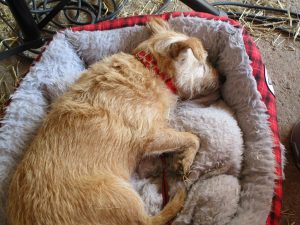 coming together beautifully and it will be great to have a new addition to add to my video channel.

Next week I’m heading over to Milton Keynes Museum to do a Peaky Blinders photo shoot. Initially I had hoped I could have used the Black Country Living Museum but due to copy right restrictions that wasn’t possible.  I’ve been learning a lot about men’s pattern cutting over the last few months and how men’s clothes of this period go together. Naturally I’ve had to have the trousers and waist coat made, cut in the mannish style to fit my figure. I had a fitting last night and once again Judi my dress maker has done me 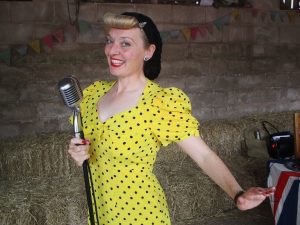 On the Sunny Side of the Street!

I’ve also been lucky and managed to find a couple of important pieces on Etsy. I was thrilled to pick up the perfect over coat cut in the mannish style to fit a woman’s figure on line and also the right period fox fur. All my furs are from the 1940s where 1920s furs have a different shape. When I get it all together I think the results will be impressive as we are going for a dark and dangerous look rather than the lady like image we have done so many times before. 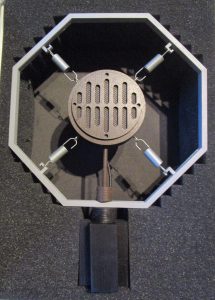 Once again these photos are for a music video I will be shooting in October which will be combining the Peaky Blinders look with Chicago hence the vintage 1920s microphone.

I’m going to leave my blog here as I need to crack on and get ready for my show this afternoon. In the meantime I will leave you with a few photos from Stonehurst Farms 1940s event. Keep Following Toodle Pip and Bye for now! 😉