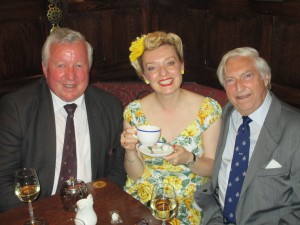 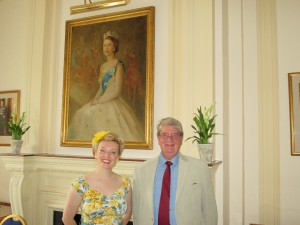 Bill and I with the Queen! 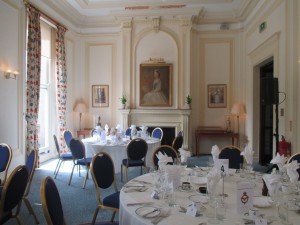 All Set for Lunch! 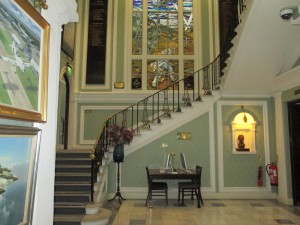 This week I have had the pleasure of singing in London at the RAF club in Piccadilly. I was engaged to sing for a very special luncheon arranged for Retired Officers who had been members of the club for 25 years of more. There’s something very special about the RAF club. This was only my second visit but when ever I’m there I always enjoy looking at the paintings. The club has a wonderful collection of aviation art only on this occasion a couple of the rooms were being refurbished. I remember from my time before seeing a life-sized painting of an officer in this Royal Flying Corp uniform and I had hoped to see it again on this occasion. The painting was in the downstairs gentlemen’s bar only the room was being refurbished along with the ballroom so I hope when I return in September to sing for the Battle of Brittain Dinner I will be able to see it then. 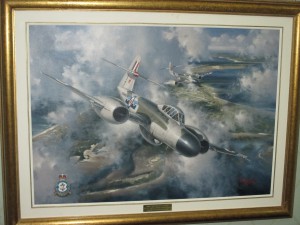 One of the Many Paintings on Display in the Club!

I confess there’s not much in life which scares me apart from driving and finding somewhere to park in London – although it’s like anything sometimes you have to take the bull by the horns and just go for it. The more you do something the easier it becomes. On this occasion I was lucky enough to have my friend Bill with me who kindly drove and helped park up Connie. In actual fact the club is very easy to get to from Leighton Buzzard. It’s straight down the M1, onto the A5 and straight down the Edgeware Road to Mada Vale and onto Park Lane. Now I’ve done the journey I know I will be much more confident come September. All the staff at the club are very helpful and unloading is made very easier when you have many hands to help. On this occasion I was engaged to perform a sing-along show of yesteryear and I included many of my favourites. I sang a real variety from “Danny Boy” to “Me and my Girl” although the numbers which went down best were from the musical “South Pacific” which just goes to show you can’t beat a good musical. The luncheon was hosted by Mark Heffron who by chance I had met before. I met Mark a couple of years ago when I sang for the launch of Buckinghamshire’s Armed Forces day at The Waterside Theatre in Aylesbury – so it just goes to show what a small world it is.  A big thankyou to Rick and every-one at the club who made Bill and I so welcome. I’m looking forward very much to returning in September with my 1940s WAAF show and as you might expect The Battle of Britain Dinner is a very special event for the club.

By chance I met BBC radio presenter Keith Skues (Cardboard Shoes) who broadcasts his Box of Delights at 10pm on Sunday nights. He had been invited as a special guest due to the fact Keith had served for many years as a RAF squadron leader reservist and was awarded the Air Efficiency decoration in 1995. Keith will be mentioning the luncheon this Sunday in his program and will be playing my South Pacific Medely. So if you are around on Sunday evening to tune into his program please do or if not you can catch his program on I Player on-line.

I’m now all packed up to head off tomorrow morning for VJ Day. I’ve two shows back to back my first is a 2.30pm in Romford in Essex and then I’m on stage in Orpington at the Royal British Legion, Queensway. I’m staying over at the Holiday Inn in Bexley as it’s going to be a late night and then I’m off on tour next weekend over to Wales and up onto Scotland. More of that next week.