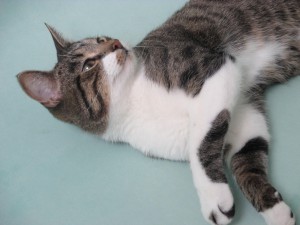 Have You Met Mandrel The Control Tower Cat? 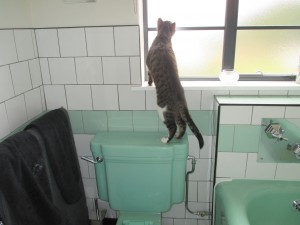 Mandrel Checking Out the Bathroom! 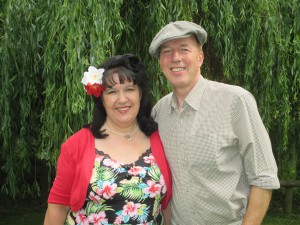 My friends Christine and John of Timescape! 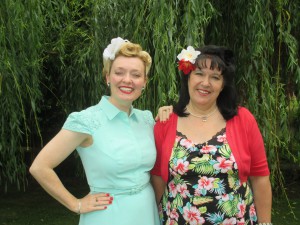 Christine and I at Pensthorpe Park! 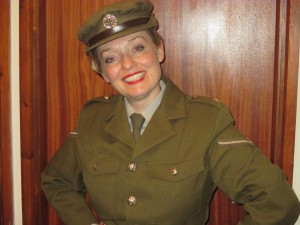 All Set to Go On Stage!

I’m sorry I wasn’t able to include everything in my last blog due to it being such a full on week – but here is my second part as promised. If you have been following me you will know I’ve just returned from The Control Tower at Egmere, Walsingham after being made so very welcome by Claire and Nigel. The Control Tower is a beautiful B&B which has been lovingly restored and turned into a wonderful Art Deco home thanks to Clair and Nigel’s hard work. It’s true what they say a home isn’t a home with-out a cat and Claire and Nigel have two rescue cats called Window and Mandrel. Names which were used as call signs when the Control Tower was operational during WW2. When my photos come through from Angela Adams you will be able to see me with both Window and Mandrel although on my final morning Mandrel came up to see me in my bathroom. It seems I’m not the only one who likes Art Deco bathrooms as Madrel had a rolly polly session in the bath and then went on to play with the blind chain while checking I had removed all my clothes from the wardrobe.

Friday was a busy day as I had arranged to meet for lunch my friends Christine and John Drury of “Timescape” at Pensthorpe Park. Christine and John do a similar thing to myself and I first had the pleasure of working with them back in 2005 when I appeared at Thetford for a Dads Army event. It’s always great to meet up with other artists and we couldn’t have chosen a better day. Pensthorpe Park is very beautiful and has a lovely restaurant come tea room. This year you can catch “Timescape” on stage at the Poppy Line’s 1940s event which is taking place on the 19th 20th September. John and Christine can often be seen performing at Holt station as the line runs from Holt to Sheringham – a station I know very well.  This year I will be in Normandy and I know the Poppy Line event is a great 1940s event to be involved with. So break a leg chaps and have a good one. I wish I could be with you both! xxx

I’m very fond of Norfolk and like the area very much so I hope it wont be too long before I have the pleasure of returning. I would have liked to have  stayed for longer but as I had a show in the evening it was important for me to get home. On Friday I was engaged to perform my “We’ll Meet Again” show in the charming village of Chipperfield. Chipperfield isn’t far from Watford and quite perfect with beautiful old houses and a large village green. Friday’s show was a fund-raiser for a hospice and I’m thrilled to say the night was a complete sell out. Paul drove up to be with me and was able to join me on stage as Paul Roebyn only I still can’t quite work out how I should be spelling that. Is it Roebin or Roebyn I’m not sure. The show went so well we didn’t leave the stage before 11.20pm having raised lots of money for the hospice. So congratulations to Trude who worked so hard to make Friday’s show such a success 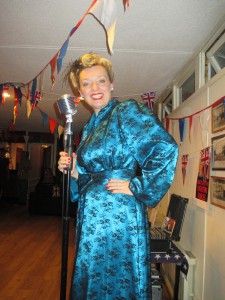 I’m out all this week and on Wednesday I’m performing in Piccadilly just up from the Ritz Hotel at the RAF Club in London. I’m also very busy on VJ Day with two shows back to back with a rehearsal to squeeze in on Monday morning in prep for my trip up to Scotland.

That’s about all my news for now Thank-you for following and Toodle Pip!