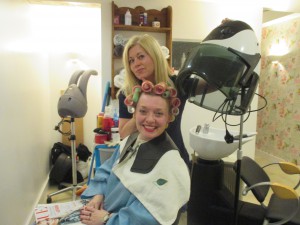 In the Salon with Kim! 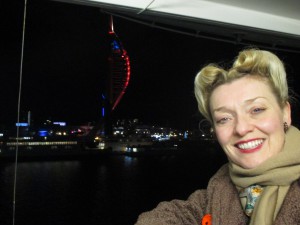 On the Night Ferry from Portsmouth to Ouistreham! 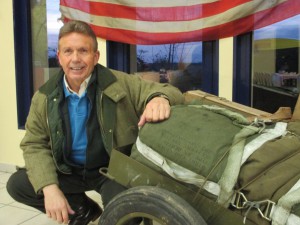 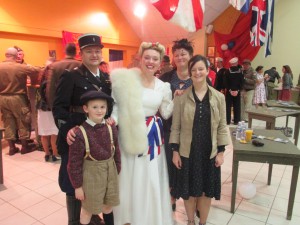 Press Call for the local Paper! 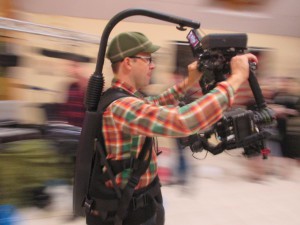 One of the Film Crew at Work! 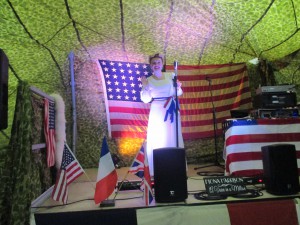 On Stage and Ready to Roll!

Hello every-one and what a busy week it’s been. I’m sorry I didn’t get the chance to blog last Thursday but what with my training program, shows, the magazine and dashing off to France I’ve been working flat-out. I also squeezed in a late night hair appointment with my friend Kim on Thursday evening so it really has been non stop! Paul and I set off to Normandy last Friday although I had a very busy morning before driving down to Portsmouth. I had a last-minute dress fitting with Judi at 9.30am. I don’t know why it is but dresses always come together during the eleventh hour. I had commissioned a new dress for the occasion and this one certainly didn’t disappoint. It’s important to keep your wardrobe fresh and exciting. After all there is nothing more thrilling than a new gown!

After my fitting I dashed off to see Rachel to look over the lay-outs for the “Sopranos a Go Go” pages. The magazine is looking splendid and I can reveal the title as “Vintage Fair”. I shall be seeing Rachel on Thursday which I hope will be our final meeting before we publish on-line. So watch this space as the launch will be early December. Not long now – only a week away so fingers crossed we don’t get any more delays! Sadly I had to cut our last meeting short. I had booked for Paul and I to sail over on the night crossing to Normandy which is why I couldn’t sign everything off with Rachel during our last meeting. It’s because I’ve been so busy that this magazine has taken much longer than originally planned. However I would rather take a bit longer, and make sure everything is right rather than rush it and regret it later. So keep watching and I shall keep you posted! 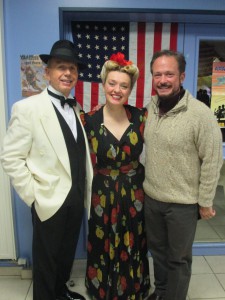 In My New Dress with Paul and Film Maker Doug Phillips

Normandy is starting to become my second home and I was thrilled to be invited back by Philippe and the Bal de la Ivy for the town’s 1940s Christmas Party at the Salle des Fetes in Ste Marie du Mont. On this occasion the club had invited two American WW2 veterans plus film maker and director Doug Phillips from the Discovery Channel. Paul and I met Doug last June in Arromanches when we did a couple of interviews for him so it was good to see him again. On this occasion Doug had brought out his film crew and it was interesting to see the advances in camera work. I can remember the days when cameras were moved on rails. Now the camera operator wears a harness which looks a little like a scorpions tail from which the camera is suspended enabling greater and smother movement. Paul and I had been engaged by the club to perform 2 x 45 minute sets of American swing music although I’ve learnt from experience it’s best to go with the flow. I opened the show at 9pm in my white gown with the French sash singing La Marseillaise and then I lifted the tempo with Boogie Woogie Bugle Boy which went down really well with the audience. Paul’s singing always goes down well as he delighted the French audience with Sinatra classics. I always make a point to sing in French and performed “Sous les Ponts de Paris”, “J’Attendrai” and my favourite Piaf number “Mon Dieu”. For act two I changed into my new dress and it was necessary for the crew to get some close up shots of the audience for camera. For this it was necessary to re sing a couple of numbers which really got the party singing. 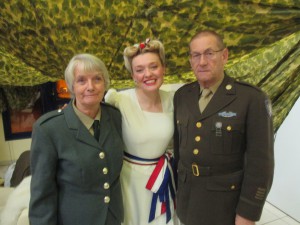 Me with Sandra and Jim! 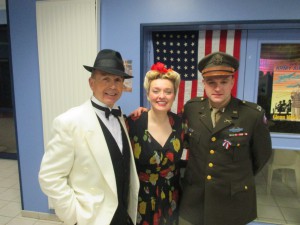 Paul and I didn’t get to bed that night until 3am the following morning and as you can imagine we enjoyed a long lay in the next day. Our friends Jim and Sandra very kindly allowed us to stay with them that night and we were greeted in the morning by their cat Harry who is just adorable! Harry even came and cuddled up with me on my bed. What a darling – I love cats! Thank-you so much Jim and Sandra for your wonderful hospitality. It was lovely to see you again and we are so pleased that the night went so well for the club! xxx

Sadly on Sunday Paul and I had to set off back to the ferry at 2pm for a 4.30pm sailing although we would have loved to have stayed longer in Normandy. I had to get back as I was booked to sing in Harrow at The Middlesex New Synagogue on Monday afternoon so I hope it wont be too long before we are back in Normandy again. In fact I shall be singing at the Edgware Synagogue tomorrow before meeting up with my friend Lynda for dinner in Finchley. This week I’ve been trying to catch up with all my friends before the Christmas season which is when everything goes really manic. I had tea after my show on Monday with friends Robert and Silyer in Pinner and today I met up for lunch with Kim at The Unicorn pub in Cubblington after my morning work-out. The Unicorn is a delightful country pub, run by the village for the village with an excellent menu so well worth a visit. I’m also performing my last “We’ll Meet Again” show of the season on Friday before stepping into the Christmas season on Tuesday which takes me through to the end of the year.

We’ll that’s all my news for now Keep Following and Toodle Pip!