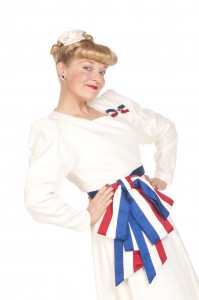 May I start this evening by saying just how shocked I was to hear about the dreadful terror attacks which took place in Paris on Friday. My thoughts  and prayers go out to the families at this very sad time. Quite rightly we all stopped for a minute’s silence in the gym today at 11am as a mark of respect.

On Saturday night I was performing in Coventry at the Greyhound Inn for a special 1940s Blitz party. What I didn’t realise when I took the booking was the 14th November marked the 75th anniversary of the bombing of Coventry resulting in the devastating destruction of the city and its beautiful Cathedral. In 1940 Coventry had 56 barrage balloons which were intended to keep the German Luftwaffe at bay. However after a prolonged heavy raid more than 4.300 homes were destroyed and around two-thirds of the city’s buildings were damaged. It’s hard to imagine that today although perhaps after hearing about the bombings in Paris it does make you realise just how fragile human life is. An estimated 568 people were killed in the Coventry raid although the exact figure was never confirmed with another 863 badly injured and 393 sustaining lesser injuries. 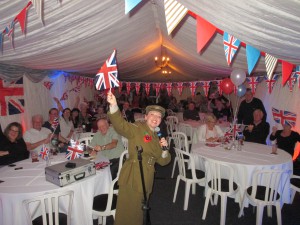 On Stage and in Full Flight at The Greyhound Inn! 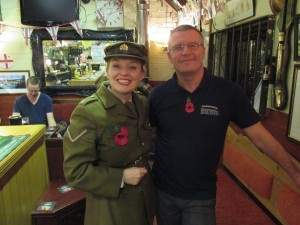 Leigh and I at the Greyhound Inn! 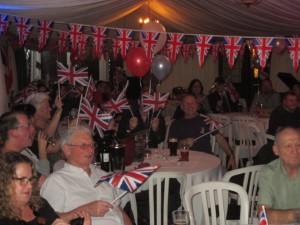 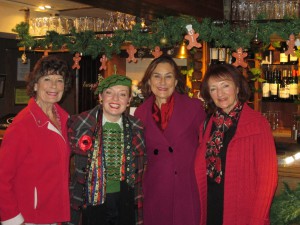 Betty, Lynda, Chris and I at the Five Bells!

It can sometimes be a little difficult judging the mood just right when you are asked to perform a jolly show at a time of great tragedy while still maintain that mark of respect. I was so pleased the proprietor Leigh Watts said a few words at the end and by way of a very small tribute I sang Under the Bridges of Paris. Despite the turn of social events Saturday was a wonderful evening and I was thrilled to finnish my show with lots of flag waving and Land of Hope and Glory. The Greyhound Inn had certainly pulled out all the stops and I’m looking forward to returning next year for St Georges Day. A big thank-you to Nobby for being such a wonderful sport and for taking the pictures which I expect many of you have already seen on Facebook.

On Friday night Paul and I set sail for Normandy as we have been booked to perform at the Salle des fetes in Ste Marie Du Mont. The show is taking place on the 21st November and we have a great program of music planned. I had been thinking about which evening gowns to take although as a mark of respect I will be opening with La Marseillaise and wearing my white dress with the French flag sash with a change of dress for act two.

I have much to do and lots of loose ends to tie before I leave for France, so I’m afraid I will only have time to blog once this week. I start on my first Christmas show tomorrow which in some ways is a bit of a shock as I’m not sure I’m ready for Christmas yet. I’m also out doing the 50s and 60s in between seeing Rachel and signing off the finished edit of my vintage magazine. It’s all very exciting and I’m already bubbling with lots of ideas for another issue although we will have to see how this one is received first. It will give readers an insight into my life style and is crammed full of lovely photos.

Today I’ve been out for lunch at the Five Bells in Weston Turville with my friends Betty, Linda and Chris. Next week I’m meeting up with my friend Kim and I have a hair appointment booked in with her this Thursday so I will look my best for Normandy.

I look forward to catching up with you when I get back. Keep Watching and Toodle Pip! 😉