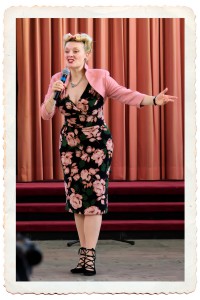 Taken by Robert – On Stage at The New Synagogue in Harrow!

Hello everyone it’s just a quick blog tonight as I have so much to do with the run up to Christmas. This week I’ve been out and about performing in Synagogues my Cabaret show. It’s been rather lovely to perform some shows with a slightly more modern twist while still mixing in my Opera. I’ve also been catching up with friends and this week I had the pleasure of meeting up for tea with Robert and Sylvia after my show in Harrow on Monday, Kim for lunch on Tuesday at The Unicorn in Cublington and Lynda on Wednesday for Dinner in Finchley.

I also saw Rachel on Thursday as we went over the final designs for the magazine and we plan to go live with “Vintage Fair” on the 3rd December. It’s all very exciting! Rachel now has to turn the finished page designs into PDFs which means it’s possible to put the magazine into production and have a printed run. At this time “Vintage Fair” will only be an on-line issue as  it’s purpose is really nothing more than a promotional aid for my career. However I was approached by someone the other day who said if I needed a man to sell advertising space within the magazine he 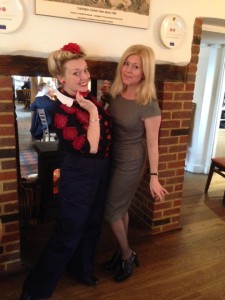 Kim and I at The Unicorn!

would be that man! At this moment “Vintage Fair” isn’t a commercial venture but perhaps I ought to give advertising some thought. No-one could ever accuse me of being modern but the one thing I do love about the age we live in now is anything is possible. It wasn’t all that long ago if someone said no to you in the media world that was the end of that. Now you don’t have to take no for an answer. If you want to make a film, record an album or even produce your own magazine you can! I hope you will all enjoy reading this magazine as much as I  have putting it together with Rachel. I have lots of ideas for issue Two although I want to see how this one goes down first before I start planning another issue.