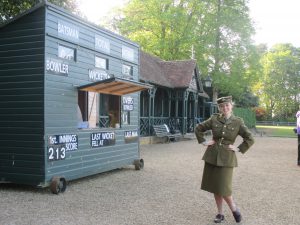 As I’m sure many of you are aware it was VE Day on Monday and this week I’ve been dashing from “We’ll Meet Again” shows to the “Best of British”. In fact tomorrow night I’m performing at Hudson’s Ale House, 77 High Street, Trumpington CB2 9HZ my Pearly Queen show as the pub is staging a Cockney Night. So if you live in the Cambridge area it will be lovely to see you tomorrow evening. The show starts at 9.00pm through to 10.00pm and I shall be singing all those Cockney favorites from “Any Old Iron” to “Don’t Dilly Dally on the 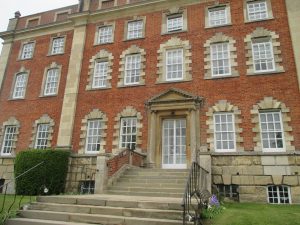 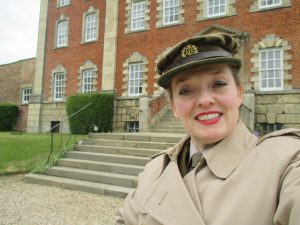 Off to My Show at Chilton!

On Sunday I revived a last minute call to perform in Harlow as the home in question had been let down by their entertainer at short notice. I was delighted to step in and afterwards on my way home I called into Ascott House for tea. Ascott is now becoming one of my favorite haunts and it’s lovely to watch the afternoon draw to it’s close over an Earl Grey tea. While I was there cricket was being played on the green and I caught the end of the match which was all so delightfully English. Especially as Sunday was the perfect May afternoon and by 5.30pm the sun was still shining.

Monday was an important day and this year I had been booked to perform my ATS show at Chilton House which is a beautiful early 17 century property located between Thame and Aylesbury. It was built by John Croke and later re-built in 1740 and is owned by the Aubrey-Fletcher family. This was my second visit to Chilton House as I first played there 20 years ago oddly enough with my “We’ll Meet Again” show too. So it was lovely to be invited back and entertain an audience which very quickly became apparent had served during the 1940s. One lady took a great interest in my uniform as she had served in the ATS.

That’s all I have time for today but don’t forget on the 20th May I will be performing for Mill Fest at The Control Tower in Carew South Wales 3 x 45  minute shows daily for the Control Tower’s 1940s event and then the following week I shall be singing at Sandringham before I head over to Normandy for the D-Day Commemorations. More news on that in my next blog.