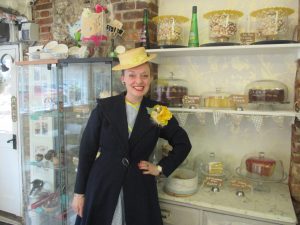 Lunch at Lady Grey in Wendover!

This week I’ve been out performing everyday my new show “Thank-you for the Music”.  It’s always good to have a run of the same show particularly as I’ve been performing a sting of new songs this time around. It really gives me time to get into the swing of things. On Friday I introduced the Supremes number “You Can’t Hurry Love” which went down really well with the audience along with “These Boots are Made for Walking”. Gone are there days of “Oh You Beautiful Doll” and and what I call the Max Bygraves song book. These are now the preferred sing-along tunes of the 55+ and it’s important as an artist I embrace them! Everything has it’s time and there is a natural progression with popular music. Much as I love the old songs I’ve been enjoying singing something different and fresh, with Abba and the Jersey Boys. I’ve fallen in love with the 70s number “Oh What a Night”, which even has a instrumental  for me to perform my retro moves! Eat your heart out John Travolta! 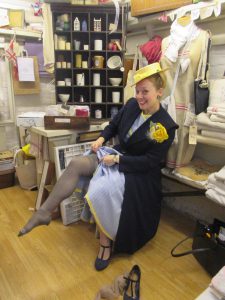 Despite what I’ve just said above I did have one “Song for Spring” show on Thursday which was re arranged  from last weeks itinerary. I’ve now put my Easter bonnet to bed for another year although on Thursday I just couldn’t face wearing a bonnet in May, so I decided to wear my yellow straw boater instead.

Many of my clothes I’ve had for years as I look upon them as old friends. I first bought my yellow boater as a child in the children’s section of Dickinson Jones in 1980. I wore it with my Sister Suffragette costume in 1985 – 87 and had it stored in a hat box for 30 years so it was lovely to wear it after all this time on Thursday. I also have an identical boater in pink which I bought about the same time in Knight and Lee down in Portsmouth. I’ve rather been inspired and I’ve decided to wear more boaters this season. I have quite a collection in the cupboard which all need to be re-trimmed so watch this space. A boater with the hair worn high looks so pretty – don’t you think? 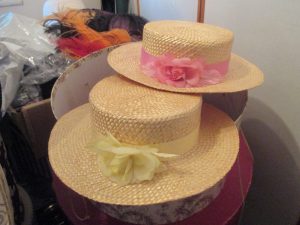 Boaters From My Childhood Still Being Worn Today!

Speaking of Boaters and Thursday I thought I would pop into Wendover after my show and visit Liberty Rose. The lady there always has a delightful selection of vintage trimmings so it’s always worth popping in for a look. On this occasion she didn’t have the petersham I was looking for but some original 1940s lisle stockings – What a find! Especially as she had a grey pair which will be perfect to wear with my WAAF uniform complete with seams. I also bought a brown pair as well which will go with my ATS uniform and with it being VE Day on Monday I couldn’t have timed things better.

Wendover is one of my favorite haunts and just next door to Liberty Rose is Lady Grey Tea Rooms. I often like to pop in for lunch as they serve a wonderful selection of  sandwiches, quiches and cakes. So if you are ever in town do pop into Lady Grey 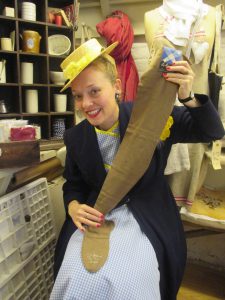 Stockings to Wear With My ATS Uniform!

for tea – I thoroughly recommend it. Tomorrow I start the first of my VE Day shows and then on Friday I shall be at Hudsons Ale House, Trumpington, CB2 9H2 performing my Pearly Queen show for the Pubs Cockney Night. I shall be on stage from 9pm -10pm so it you live in Cambridgeshire it would be lovely to see you at the show.

More news on Normandy – I’m thrilled to report I’ve been booked to perform in Benouville on Monday 5th June for a special D-Day dinner at the Town Hall. For those of you who know your history Benouville was the first town to be liberated during the D-Day invasion and is where you will find Pegasus Bridge which made up part of the Sword Beach invastion plan. I’ve never perfomed at Benouville before so I’m looking forward to doing so very much. Mondays show is a private function but you will still be able to catch me singing on 3rd June at the Airborne Museum in Sainte – Mere- Eglise and in Ste – Marie – du- Mont on the 4th. I’m still waiting to hear back from two other towns located at Gold Beach about the 6th & 7th June. So keep watching this space and I shall keep you posted.

For those of you who didn’t catch my April Best of British article on “Fashion on the Ration” you will be pleased to know it’s just been up loaded to my web-site. So do click through to my Articles page if you would like a read. I’m also planning to give my web-site a bit of a revamp with my new web designer Iain Quarmby. Iain has offices at Bletchley Park  which as we all know was the home of the code breakers during WW2. Maybe it was fate that Iain and I came together at Bletchley Park and I’m looking forward to taking my web-site forward so keep following!