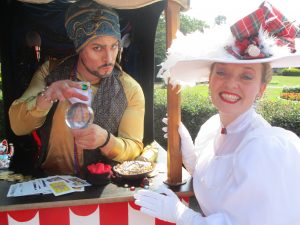 On Stage with the Mighty Zoltar! 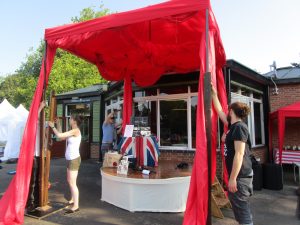 Working Together to Build my Stage!

I’m sorry I’m a bit late with my blog this week but I’ve had an extremely busy week with the start of the Proms season and a full bank holiday diary. The weather has been hotting up and last Thursday I was in Ilford performing songs from the Hollywood Musicals at Beehive Lane Synagogue. It gave me the opportunity to try out my new “Oliver” arrangement which has been going down really well with audiences. “Oliver” will be making up  part of my new “Fairy Tale Christmas Spectacular” show which I start performing the end of November through to the end of December 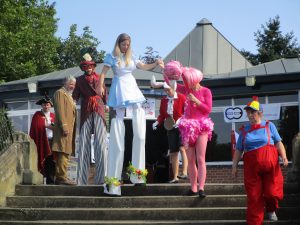 Cast Getting Ready into Position!

After a couple of days of Proms concerts, on Sunday I traveled up to Leicester to sing for production company Enter Edem. A young dynamic theater company where every-one pulls together to stage fantastic events. I first had the pleasure of performing for them two years ago and they are truly one of the best production companies I have ever worked with. Really professional  and extremely efficient, Enter Edem had been engaged to stage a Victorian event in Abbey park. What a difference a year or two can make as last time we were plagued with rain but this year the sun shone down profusely all day.

I wasn’t due to be on stage until mid day but as I wasn’t sure about unloading I arrived just after 8am and found I was able to drive right to where I needed to be while the company worked together to build my stage and gazebo. For this show I had been engaged to perform 3 x 45 minute Music Hall shows daily but with-out costume changes. I always carry a spear costume but due to the rising temperatures I decided to wear my white late Victorian gown which proved to be the right choice as the afternoon sun got hotter and hotter. 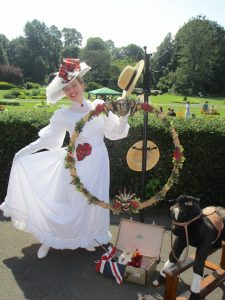 Props in the Park!

As for the rest of the company I don’t know how they managed as some of their costumes looked extremely warm as they depicted characters from “Alice in Wonderland” and Victorian society while encouraging visitors and children to play games.

Next day it was all change for Enter Edem as Monday’s theme was medieval. I however had been booked for Bank Holiday Monday to play my “My Fair Lady” show in Halton.  As temperatures were still high I wasn’t looking forward to getting into costume and wearing wool along with lace boots. However in the end I comprised and wore pop socks and shoes which stopped me from over heating and made all the difference.

Since returning from Leicester and “My Fair Lady I’ve been catching up on paper work and been in the recording studio. 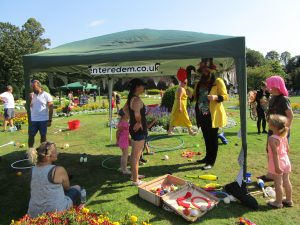 Fun and Games in the Park!

This Sunday Paul and I will be on stage at Shuttleworth Museum, Biggleswade,  performing for their Vintage Air Show, 3 shows daily at 10am singing the 1920s and 30s, 1pm the 1940s and at 3pm the Swinging 50s, 60s and 70s. So it will be great if you can make it along.

The following week the 3rd September is the 80th anniversary of when Neville Chamberlain announced Britain was at War with Germany and as you can imagine I’ve a busy “We’ll Meet Again” week booked plus  a 1940s show on Saturday night with Paul at St Lauds Church in Sherington. I shall tell you more about that in my next blog 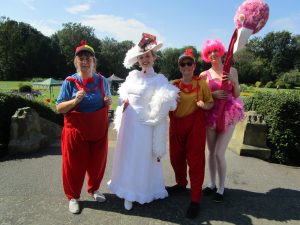 Meeting Up With The Costume Characters!

along with my show times for Hughenden Manor’s 1940s weekend the 14th and 15th September.

In the mean time I shall leave you with some pictures from the weekend. Keep Following and Toodle Pip! 😉 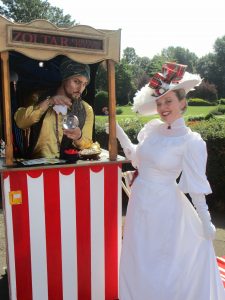 Having my Fortune Told by Zoltar!