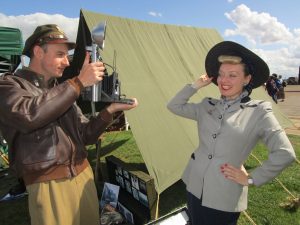 Gosh how time matches on. Saturday was the last day of Summer and now we are into the Autumn season with the start of September. For those of you who know your history today 3rd September marks the 80th Anniversary of when Britain went to war with Germany and perhaps it wont come as any surprise to learn for those of you who follow me, I’m booked all week to perform “We’ll Meet Again” shows. 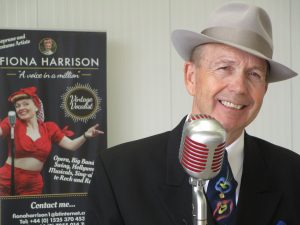 In fact this Saturday you can catch Paul and I on stage performing a special WW2 Commemoration concert at St Lauds Church, Sherington, Newport Pagnell, Bucks, MK16 9NU. Tickets are £10 each which includes a glass of wine and cake and we shall be performing 2 x 45 minute sets of songs from the 1940s in costume. Tickets can be obtained from Alan Sims on Tel 01908 610434  and the show begins at 7.00pm. We hope you can all make it along to see us as we will be singing a mixture of music from the 1940s which will include Sing-along, Big Band and Swing, Hollywood musicals and much more. We look forward to seeing you! 😉

In the meantime Paul and I have just got back 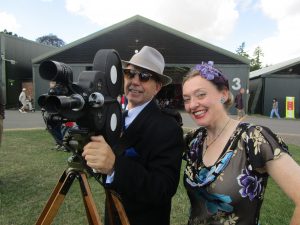 from a fantastic day of performing for Shuttleworth Museum’s Vintage Flying Day. The wonderful thing about the Shuttleworth collection the aircraft and vehicles don’t just stay locked up in the hangers. On flying days it’s possible to see many of the vehicles driven and the aircraft flown which is a real treat.

I had been engaged to perform 3 x 45 minute vintage shows daily which started at 10am with my 1920s and 30s set followed by the 40s at 1pm and concluded at 3pm with songs from the 1950s, 60s and 70s. The flying displays continued though 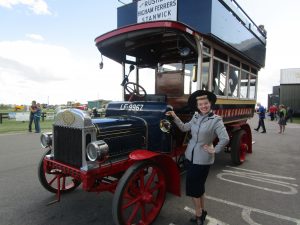 Enjoying the Show and Vehicles!

until 6pm and we were extremely lucky with the weather.

This was my sixth visit to Shuttleworth and once again we were in Hanger 3 which is a great spot as we are right by the pop up tea room and all day long we had a steady flow of visitors. On these special days Shuttleworth always has an interesting array of stalls and attractions. Paul and I were particularly taken with Battlefield Photography run by Steven and Jordan Ann as they had a fantastic selection of movie cameras from the 1940s which we couldn’t resist having our photos taken with. 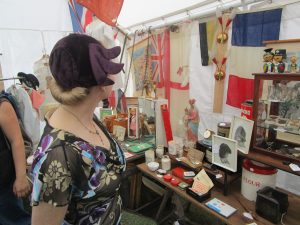 Shopping for Vintage between shows! 😉

Now it’s full steam ahead with lots of 80th WW2 Commemoration concerts this week and don’t forget on the 14th & 15th September Paul and I will be on stage performing for the National Trust at Hughenden Manor’s 1940s event. This year Paul will be performing his own set and I wont just be singing but compering and running the dance work-shop as well.

I’ve had a new out-fit made for the work-shops as it’s important I can move and lift my arms without being inhibited by my vintage clothes. Sometimes it’s best to start from scratch rather than alter an original out-fit which is too delicate to take the 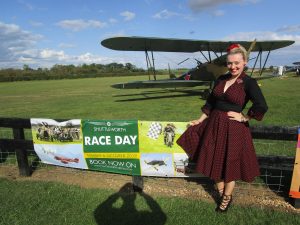 Dressed for my final Set!

wear and tare. I had a fitting last week and it’s wonderful to see an out-fit taking shape and coming together

That’s all my news for now but in the meantime here are a few photos from the Shuttleworth show on Sunday. Enjoy Toodle Pip and Bye for now! 😉 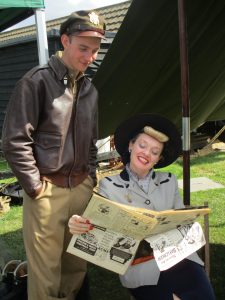 On Set with Jordan Ann of Battlefield Photography!