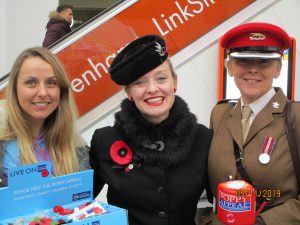 Collecting for the Poppy Appeal! 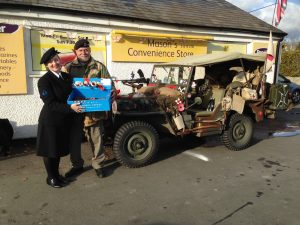 Meeting Up With Joe Marling in Pitstone!

Hello every-one I’m back after an intense week of Remembrance shows. In many cases I have been performing two shows daily and my travels have taken me to Birmingham, Maulden and this coming weekend I will be performing at Porchester Castle, but more on that in a moment.

To begin with I would like to start by thanking every-one who helped to support the Poppy Appeal this week. It’s a wonderful cause and my friend Joe Marling, better known to us all as “The Poppy Man of Pitstone” was out every day collecting for this all important charity. Every year Joe stands out-side Mason’s Stores in Pitstone with his WW2 jeep attracting visitors to donate. This year Joe was hoping to beat his target of £4000 and I hope very much he will succeed as the Poppy Appeal does so much for service personnel and their families.

On Tuesday I too was helping with the Poppy Appeal in Birmingham. I had been booked to perform all day by the Royal British Legion at Birmingham New Street Station. My job was to sing  from 8am through to 5.00pm, 20 minutes on 20 minutes off songs from WW1 through to the 1970s attracting passes by to donate. My day 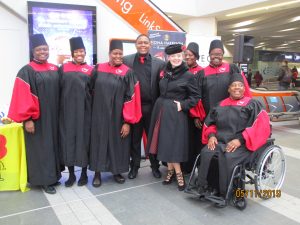 On Stage with The Gospel Choir!

started early although usually with these things it’s a case of singing where necessary to fit in with other visiting artistes.

I left Leighton Buzzard at 4.30am and drove straight to Birmingham New Street Station. I say straight to, as Birmingham is one of those places where you need to have local knowledge. Sat Navs don’t really work due to all the roadworks and the cities famous one way system. Fortunately with a little help from my friends, Mark and Yanto, I was able to get to where I needed to be. 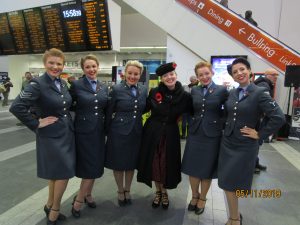 Meeting Up with The D-Day Darlings!

I had the pleasure of singing for the appeal last year and there is always a great atmosphere at New Street Station. The Poppy sellers are joined by military personnel and together we work hard to invite donations. This year I had the pleasure of working along side the Emmanu-El Apostic Gospel Choir who were just phenomenal and the D-Day Darlings who were in town promoting their show.

Teamed with my Evy 300 speakers it made a wonderful opportunity for me to try out my new powered mixer amp, the Yamaha EMX7. It didn’t 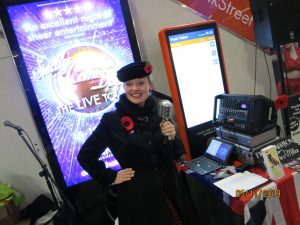 Ready to Roll with the Yamaha EMX7!

let me down and gave me all the sound I needed for the stations size. It’s a big space to fill with a natural reverberation so when I steeped back and listened to the Gospel choir through my rig I was very pleased with the result. They sounded terrific and that Yamaha EMX7 really does do what it says on the tin “turning a band into an orchestra!”

These sorts of assignments really sort out the women from the girls. It’s a hard days sing and not for the fainthearted. I was on stage from 8am singing for commuters and I’ve learnt from experience to bring two pairs of comfortable 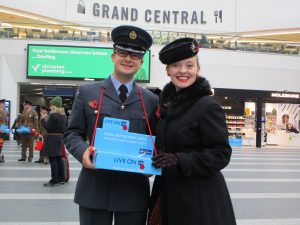 shoes. Regardless of how comfortable your stage shoes are when you are standing for that length of time you will need a change. By the end of the day my feet had reverted to stumps in the ground due to cold and standing for so long. The strange thing is you don’t even notice it until you start to walk again and get the circulation back.

I think by the end of the day I had sung my way though eighty or so numbers covering everything from Puccini to Chuck Berry although interestingly the numbers which went down best of all were the Rock and Roll, Abba and Grease 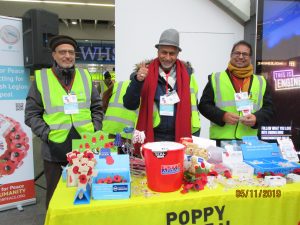 songs which got every-one joining in. They proved to be far more popular than the 40s numbers and it was a good opportunity for me to try out my new Disney and Oliver arrangements which went down extremely well.

You always know when you are onto a winner with a new arrangement when you are able to get busy people to stop and listen. It’s not always easy and there are times when you can be singing your heart out to nothing but what matters is people did listen and donate to this all important cause. I sang through to 5pm and afterwards once all my equipment had been packed away I sat 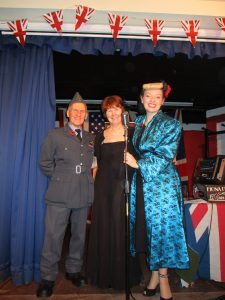 On Stage with Rosie and Bob at Maulden Village Hall!

down and enjoyed a wonderful meal at Carluccios Italian Restaurant. I can’t begin to tell you how much I enjoyed my sea-bass and chocolate bread and butter pudding for desert. Just what I needed after a hard days singing.

I didn’t get home until 10.30pm and I was straight to bed. I’d planned to leave Wednesday clear although I revived a last minute call to do a show that afternoon so I was straight out again performing a remembrance show which continued through with other performances for the rest of the week.

I currently have 11 x 1940s shows and this season I have had the pleasure of performing a variety from WAAF, WRNS, ATS and Glamour. Saturdays show at Maulden Village Hall had a Glamour brief as the whole village came together to support the Armed Forces charities. I had been booked by Maulden History Society to sing songs from the 1940s, numbers every-one could sing-along and dance too, and what a wonderful 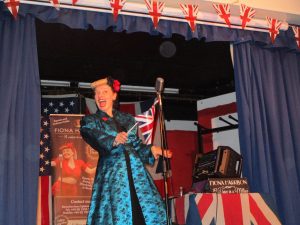 On Stage at Maulden Village Hall!

evening we all had too. The hall had been beautifully decorated and every-one came in costume.

So often when I get asked to sing for dancing nobody gets up and dances but not at Maulden as the floor quickly filled and every-one got into the Wartime spirit. It really was a wonderful night with a prize for the best dressed, a 1940’s quiz, Bob Gale compered the evening and Mark Stevens was our DJ. We also had a special guest performance from The Alka Seltzer Sisters made up from the Maulden Players while Ron Chimes accompanied them on keyboards and played a 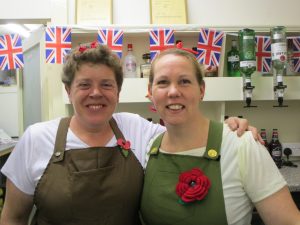 selection of patriotic songs for the finally. I’d also like to thank Mark Shephard from the Village Hall Team who helped me dress the stage with my large flags and to Rosie Coyle for inviting me to sing. A great time was had by all!

This Friday 15th November you can catch me on stage performing “We’ll Meet Again” the music of the 1940s with debonair Sinatra Vocalist Paul Marsden at St Mary’s Church, Portchester Castle, Hants.  The show begins at 7.30pm, tickets £8 and are available from the Parish Office on Tel 02392 321380. There will also be a few tickets available on the door, but hurry as I hear they are selling 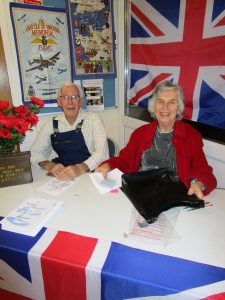 That’s all my news for now apart from next week where I will be down in Mill Hill, before heading onto Bournville in Birmingham with my one woman “My Fair Lady” show before starting on my Christmas season. 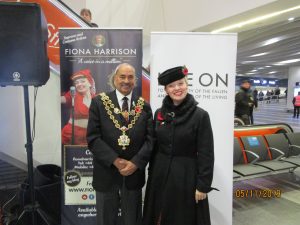 Meeting Up with the Lord Mayor of Birmingham!