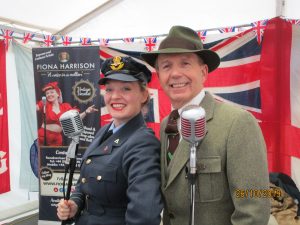 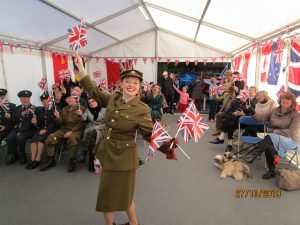 This week I’ve been working flat out catching up with my paper-work in-between performing Halloween shows. I’ve almost caught up and I don’t mind admitting I went with-out sleep to get my second Italian blog installment out for you this week. It’s hard graft especially as my printer went down a week last Friday and it’s taken until this afternoon for me to have a new one installed.

It’s been a real killer and perhaps not surprisingly I’ve been under a great deal of pressure to make my dead lines. I like to set myself high standards and it’s important I keep you all well informed and I don’t let things slip. Unbelievably I had to replace my amp this week too. I think it may have a dry joint and fortunately it goes in to be repaired this Monday. Last Monday evening it shut down mid show just before the interval but lucky I had a new amp in the van which I’d only picked up the day before. I quickly unwrap it and I was up and running again in minutes just in time for the second half.

It’s important to carry back up and that one was a little too close to call. I can’t tell you the amount of adrenaline I used up that night and at times it’s 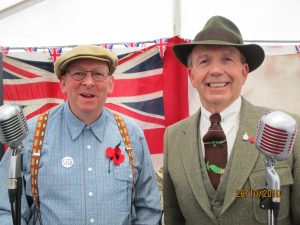 Paul and Dave Dawes Between Sets!

been a bit like the song – “One wheel on my wagon but I’m still rolling along!” However all things considered it great to come out the other side stronger and now I’m looking forward to a busy Remembrance week and an action packed Christmas.

So on with my blog and firstly I’d like to begin by thanking every-one last weekend at the Newark Air Museum for staging such a great 1940s event. Late October can be a difficult time of year for events as the weather isn’t always kind. However despite a very wet and windy start every-one pulled together to make the weekend a great 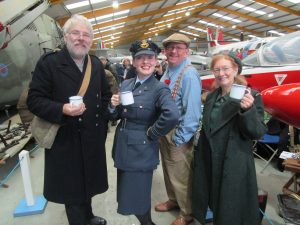 Meeting Up with Re-enactors Over Tea!

success. This event has a wonderful atmosphere run by a terrific gang of people who pull out all the stops.

This year Paul and I had the pleasure of working  with Dave Dawes from 1940s radio who linked the event with live broadcasts from 1940sradio.com  and a selection of songs from the era. I had been engaged to perform 3 shows daily and as always I like to make sure I include a good variety of music incorporating different themes. 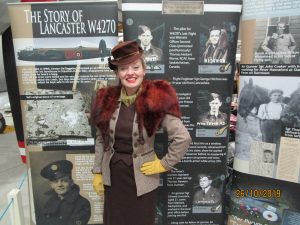 This year we had a marquee and Paul sang the best of Sinatra which the audience really enjoyed. On Saturday I performed  “Those Magnificent Men” WAAF Show, “Don’t Sit Under the Apple Tree” Glamour Show and “GI Jive” a WAC Show.  On Sunday I began with  “We’ll Meet Again”my  ATS Show,  a Hollywood Swing set and finished with “Anchors Aweigh” a US WAVES show. Sadly were weren’t able to go ahead with the Saturday Night dance due to the cold and heavy rain but come the Sunday the sunshine returned and every-one worked tirelessly to make the event a success. 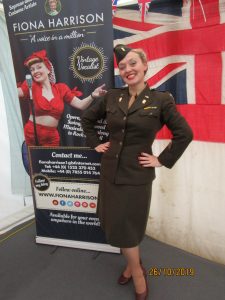 can change hourly. With so many different shows it’s important I have all basses covered and sometimes when it comes to glamour it’s not until I’m there experiencing the moment I even know what I’m going to wear until the very last minute.

One of the highlights of last weekend was the Sunday service which was taken by David Moore. Included in the Church Parade was the “Airman’s Hymn” which we sung to the tune of “Melita” and is better known as “The Navy Hymn”.  We also sang “God is Our Strength and Refuge” to the tune of the “Dambusters March” and Denis Turner read the poem “Who are these men” which was very moving.

There was also a fire display and it was lovely to see the vintage vehicles and all the re-enactors dressed up in full kit. 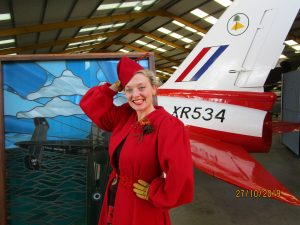 Dressed Warm for the Weather!

This week I start on remembrance shows and on Tuesday 5th November I shall be performing for the Royal British Legion and the Poppy Appeal at Birmingham New Street Station. I had the privilege of singing for the Birmingham Appeal last year and if everything goes to plan I will be singing from 8am in the morning through to 5pm, performing 20 minutes on 20 minutes off all through the day. I’ve been booked to perform music from the Great War right through to the 1970s, something for every-one I hope. So if you happen to be in Birmingham on 5th, do pop along and see us at New Street Station as we work hard 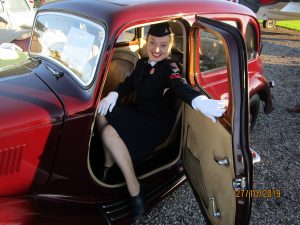 Making the Most of the Sunshine!

to fill those all important Poppy tins for a very worth while cause.

That’s all my news for now apart from my new My Fair Lady Promo film is well on it’s way and last weekend I used part of it to record a message to all my friends who were celebrating Vale’s 50th Birthday Dinner. I leave you with a link and some photos from Newark.