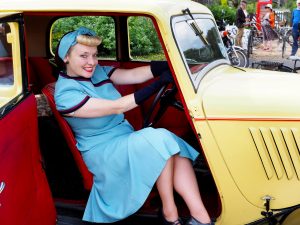 Once again this week has whizzed by and I’m struggling to fit any more shows in for the year. I never thought I would say it but I appear to be fully booked and the few days I do have left seem to be taken up with hair appointments, travelling, meetings and video editing. 2022 is rapidly slipping away and I’m now concentrating on selling shows for 2023 and 2024 while enjoying the last few days of summer.

This week I had the pleasure of performing at The Buckinghamshire Railway Centre and working along side photographer Tony Margiocchi. The 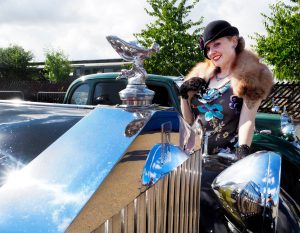 railway had engaged me to perform 3 x 45 minute costume shows daily for their Pre – 1988 Vintage Vehicle Rally. The event was packed and over the course of the day I sang songs from the 1920s through to the 1970s as visitors enjoyed train rides and the various vintage vehicles on display. 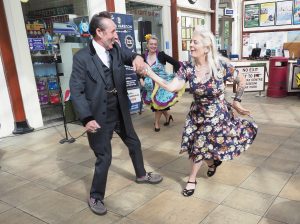 Rock & Roll is Here to Stay at Quainton Railway Station!

popular as people sang along and danced to my music.

These days social media is such an important part of the way the world turns it’s important not to be left behind. Everything needs to be documented and I was very lucky that Tony was available to join me. Sometimes I find having to do photos on top of everything else I’m doing can be a little too much. Tony did me proud and I now have a wonderful collection of shots which are doing the social media rounds as we speak.

Waiting on the Platform in my 1950s Florals!

Tomorrow I’m performing for a private 1940s party in Wheathampstead and then it’s full steam ahead towards Battle of Britain Day on the 15th September. Today I performed two WAAF shows back to back and on Saturday 10th September I’m in Banbury performing at the RAF Club for their Battle of Britain Ball songs from the 1940s, 50s, 60s & 70s. 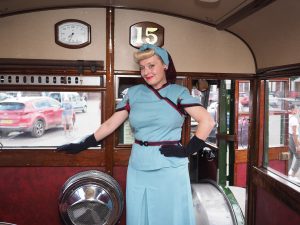