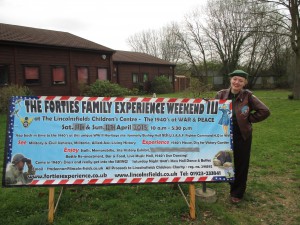 Monday Morning and Off Home After the 40s Experience! 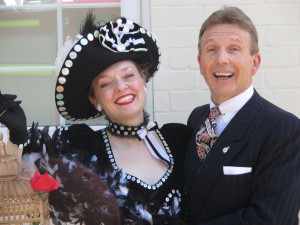 Out & About Doing the Lambeth Walk Pearly Queen Style!

I’m just back from performing at the 1940s Family Experience weekend at Bushey and what a wonderful weekend it’s been too. I always feel that this event marks the start of the season and thank-you to every-one who came along and supported us.  We even had sunny weather so we couldn’t have asked for better than that! The 40s Family Experience takes place at the Lincolnsfields Children Centre which was once the sight of Bushey Hall and the home of the 8th Army Air Force fighter Command  during the second World War. Sadly the old manor house  was demolished in 1955 which is a real shame as it had great character. Built in 1865 at the staggering cost of £150.000 it bankrupted the owner and later was sold and became a Victorian Hydrotherapy Hotel. Looking at some of the old photographs it reminds me architecturally a little of Bletchley Park and I wish so much it was still standing. The American 8th Army Air Force established their headquarters in 1942 and Bushey Hall became station number 341. 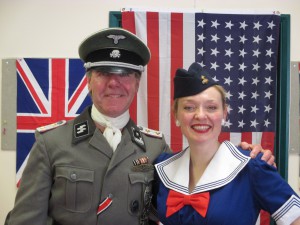 Brian the Friendly German from Mansfield!

This weekend I have been staying on site performing 3 x 45 minute shows daily and this year I was joined on stage with my proterzay and World Famous Unknown Bathroom Singer Mr Paul Marsden. Paul has a wonderful voice and sings in the Frank Sinatra syle although I keep telling him to wear his hat and to use his diaphragm.  Paul was a real hit this weekend and I feel very proud of what he was able to achieve. He dazzled every-one with “I’ve Got the World on a String” and he will be joining me on stage in Normandy on the 6th June and at Longhope when we perform the music of the 1950s and 60s. So for all you Paul Marsden fans out there don’t worry because you are going to be seeing a lot more of him in the future. 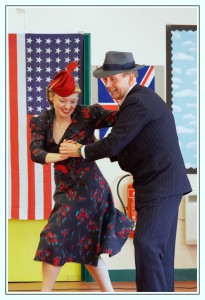 Paul and I Lindy Hopping!

It’s very important when performing at events that you ring the changes and have something new to offer. I spend a great deal of time thinking out my show plans and it’s necessary to have something fresh every time. This year I included a Pearly Queen and an Easter Bonnet show. Both went down really well especially the Pearly Queen one as 40s events do tend to get swamped with American Music so I enjoyed doing something British which the audience really enjoyed.  On the Saturday night I was engaged to perform at the  Evening Dance and there in contrast I wore my American WAC uniform and performed lots of swing tunes. On Sunday after my 11.30am Pearly Queen show I did a US WAVES show only to find shock horror I had only picked up 6 suit carriers instead of the seven and I had left my WAVES Uniform behind. Forchatly I always carry a spare out fit just incase. I had my WAVES cap so I was able to style an outfit together and give it a Hollywood glamour twist. In some ways I think this outfit worked out even better than having the uniform. My WAVES show has a lot of Hollywood Musical content which again makes a contrast from Swing. 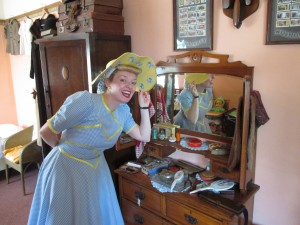 All Set for My Easter Bonnet Show in the 40s House!

Now I’m back home it’s time to crack on with my latest show “Life on the Wicked Stage” which will be taking place this Saturday at 8pm in Ollie Vees Tiki Lounge in my home town of Leighton Buzzard. This will be a show about my life in show business as I perform related songs poems and sketches in the Joyce Grenfell style.  Tickets are £10 each and available from Ollie Vees on Tel 01525 851726 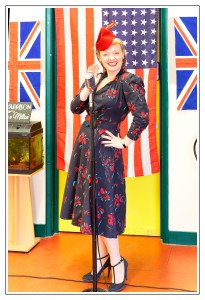 Time for Bed Now I think enjoy the photos. Toodle Pip and thank-you for following! 😉 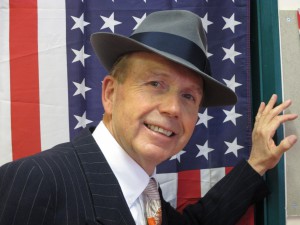