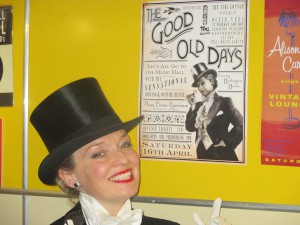 Between Sets at Ollie Vees!

I have so much to cram into tonight’s blog and so little time to write. I still have show plans to do and words to learn not to mention costumes to prep for Wednesday so I really must crack on. Firstly I’d like to thank every-one who came along to support me on Saturday night at Ollie Vees in “The Good Old Days”. Ollie Vees is a very intermit venue and it was lovely to see so many friends. Thank-you every-one for your support it was much appreciated especially Robert and Sylvia who came in costume and won the prize for the best dresses. Don’t worry your CD is in the post ! I’m so pleased you all enjoyed 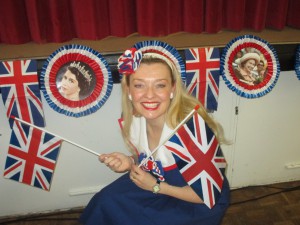 Happy and Glorious in Datchet!

the music as it’s easy to forget in to-days world just how important these Music Hall songs were back in the day. So much of this music has been kept alive by the Pearly Kings and Queens of London Town. Speaking of which I have four Pearly Queen shows to do this week alone to tie in with St Georges Day on the 23rd. 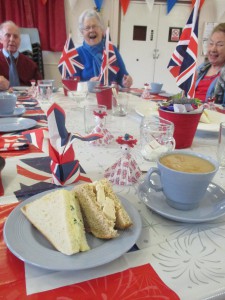 add in a few extra songs from the 1940s and 50s which went down really well with the audience. It’s given me a few ideas for my future show plan as those 40s & 50s numbers worked so well with the traditional British songs of Rule Britannia and Jerusalem. The WI Hall had been beautifully decorated in red white and blue. I was asked to stay for tea, as we all sat down to hand cut sandwiches and Her Majesty The Queen cup cakes, which were delicious!

It had been my intention to go to Hammersmith Vintage Fashion Fair on Sunday as there were a few things I would have liked before I start filming again on the 15th May. However after Saturday nights show we were still very tired so Paul and I decided to go out for lunch at the Bell in Woburn. When I’m in town I always like to visit the Antiques centre and Minchin and May the beautiful home and gift center. 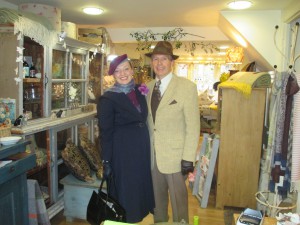 Paul and I Shopping at Minchin and May!

On Wednesday I’m off to Tilbury and the Ellis Theatre as I’ve been booked to perform my “From Cobles to Rock” show a 100 years of music and costume. Kim is working with me as my sound engineer and we shall be using my brothers van. Connie is just an inch too short to take my screen as she has been boxed out. The screen is very nessecialy for this show as its fast moving. I have 11 costume changes which I do on stage behind the screen while narration is going on and telling the story of the changing decades from 1900 – 2000. In many cases I have less than 20 seconds to change in so all my costumes are velcroed 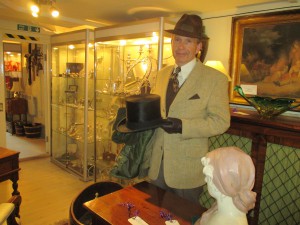 and it’s very demanding not only vocally but physically. Kim and I will be coming back first thing Thursday morning as I have to dash straight off to Marlow in the afternoon for a “Happy and Glorious” show. I’ve two shows daily on Friday and Saturday with my final show taking place at The Greyhound Inn, at Sutton Stop, in Coventry. I’ve been booked for a Best of British Pearly Queen Music Hall show to mark St Georges day so busy busy!

I must go now as I still have so much to do. Once again due to my work load I will only get the chance to blog once this week but I will catch up with you all next week. I will try to keep you all up to date with photos through my Facebook pages.