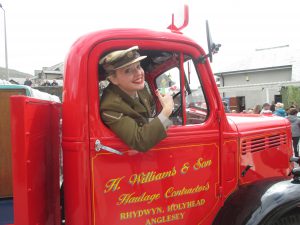 Off to Blaenau Ffestiniog in a Bedford Truck! 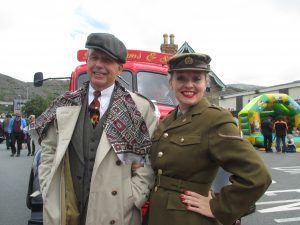 Paul and I between Sets!

This week I’ve been back on the road performing a variety of different musical styles from Nancy Sinatra’s “These Boots are Made for Walking” form my “Swinging 50s and 60s” show to “On the Road to Marco” today, as I performed my  “Hooray for Hollywood” show in the town of Peterborough. In fact it’s been all go as Paul and I drove into the Welsh valleys for Blaenau Ffestiniog’s Vintage weekend on Saturday which started with my “Putting on the Ritz” show as I was engaged to perform the music of the 1920s and 30s at The Bridge Cafe for a special show that evening.

What’s so exciting about my job is I get to go everywhere and I enjoy performing many different styles of music. If you have every seen me on stage you will know I’m very particular about my musical arrangements and it’s important my act is unique and not something which has been put together from a CD bought off the internet. A great deal of thought goes into my musical arrangements which like my clothes are all tailor made to fit. I like to pick popular songs and have them arranged into medleys which are both fast moving and engaging to listen too. This weekend I was able to use some of my favorites as I combined the best of Hollywood 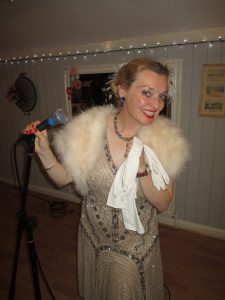 Putting on the Ritz at The bridge Cafe!

with sing-along as I sang my way though 70 numbers from Al Jolson to The Andrew Sisters.

On Saturday night Paul joined me on stage as we performed a number of songs attributed to The Great American song book. I also added in some fabulous Charleston tunes, my favorite being “If I had a Talking Picture of You”. I discovered the sheet music by chance in a Mrs Mills song book, although it had been a number I had long wanted to do for many years. It’s great when a plan comes together and this is a song which was well worth putting into production. I love the 1920s not only for the fun jazzy music but for the beautiful beaded  fashions which the flappers use to wear when dancing the Charleston. Paul dazzled every-one with his rendition of Cole Porter’s “Night and Day”and it was wonderful to see every-one singing and tapping along with “Me and My Girl” and “Bye bye Blackbird”. 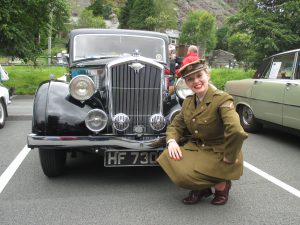 The entire weekend had been arranged by Gaile Weir and was about bringing people to the town of Blaenau Ffestiniog. On the Sunday the town took on a 1940s theme as local people dressed up and took part which coincided with Blaenau’s vintage car show. I had been engaged to perform 3 shows daily as I opened in the morning with my WAC “GI Jive Show” and I closed the day with my 1940s Glamour show “In the Mood”. At 12.30pm I performed a special show for the children who had come dressed up as evacuees. I already had in place a 1940s schools show which I regularly  perform in schools as Gaile asked if I could do 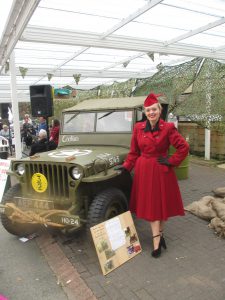 Under Cover and In the Mood!

something special for the children. When I work with children I like to harness their energy as I get them to sing along, clap along and do actions to songs such as “Run Rabbit” and “Yes we have no Bananas”. At the end of which every one who dressed up and took part got a sweet.

I confess Paul and I had been a little worried about the weather  but all in all we didn’t do too badly. My last set was at 3.30pm and up to then we hadn’t really had any rain until I started to sing. Just as I began my final set the heavens opened and most of the visitors made a dash for it along with many of the vintage vehicles. Fortunately we were under a canape with a WW2 jeep as the die hards stayed and enjoyed our final show huddled around the jeep. My friend Maxine Evans stayed and danced in the rain with her friend as I had an ambulance flash his lights at me in time with the music along with the little red bedford lorry which stayed to the end as we 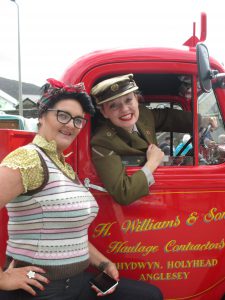 My Friend Maxine and I!

finished the show with “There is Nothing like a Dame”.

Thank-you to Gaile and to Blaenau for working so hard to put on such a great event. I often enjoy performing at smaller shows far more than the larger ones as they are often more rewarding and it was lovely to see so many friends from last year.  Speaking of personal while I was on stage I spotted one man in the houses opposite watching my show from his sitting room with a pair of binoculars! There’s none so odd as folk as he only had to walk across the road!

Tomorrow I’m off to Epping Ongar on Wednesday, Coleshill on Thursday, Abingdon on Friday, Beaconsfield on Saturday and on Sunday I’m performing for Shuttleworth’s Edwardian Pageant. I only have to to perform 2 x 45 minute shows daily so a nice easy one for me. My first show is at 9.30am with my second at 1pm so I hope you can all make it along to see me. I’ve also been asked to judge the best dressed so I’m going to 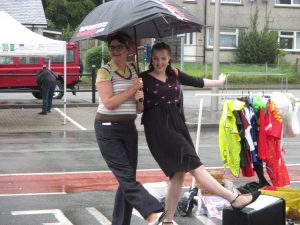 Singing & Dancing in the Rain!

make sure I have a good stroll so I can see every-one in there beautiful out-fits.

That’s all my news for now although next weekend I will be performing for Newark Air Museum and I will have more to tell you about that in my next blog. Keep Watching and Toodle Pip! 😉 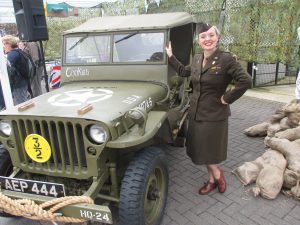