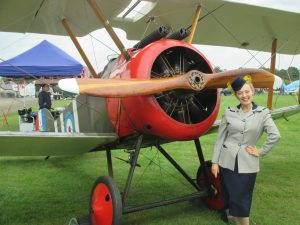 Between Shows at Shuttleworth!

Autumn is here and it’s full steam ahead with shows every day right through the month of September. As you can imagine I have much to look forward to and plan for. On Friday I have a morning show so I’ve set the afternoon aside for going through the rushes with David from last weeks filming. If you follow me on facebook you will know I managed to down load Kim’s back stage video footage and photos she took of me on her mobile phone onto my facebook pages. I’m such a dineasaw when it comes to technology but I’m pleased to say I got there in the end. When I wrote my last blog I couldn’t remember how to do it but all is well and I’m looking forward to seeing David’s footage on Friday. I was especially pleased with my two new costumes. GI Jive and my Carmen Miranda design which looking at Kim’s footage did everything I wanted it to do. 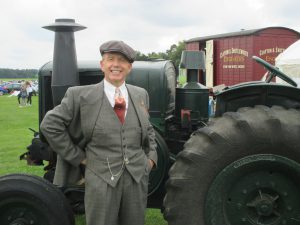 Down on the Farm with Paul! 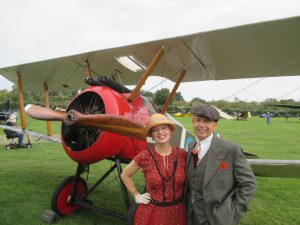 Today I’ve been working on some new routines and mapping out my dance workshops for Hughenden Manor. I was in the recording studio with 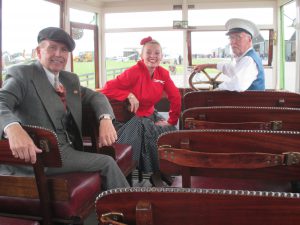 Out for a Spin on the Charabus! 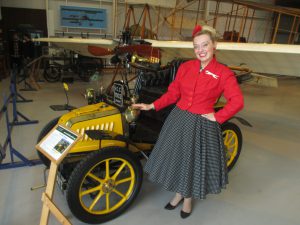 Richard last week going through suitable music and in the end I settled on a few pieces played by the Victor Sylvester Orchestra. His arrangements are so English and just right for the period. Unlike the American line ups of the 40s he doesn’t use brass which gives his compositions that English sound which I think will contrast splendidly with my American Hollywood arrangements.

I will be playing at Hughenden on the 16th and 17th September for the Houses 1940s event. This will be a little different for me as I wont just be singing but hosting, compering and running  dance work shops as well, so hence today’s run through. I will have more news on that after this week so keep watching my pages.

Yesterday Paul and I were performing at Shuttleworth for the museum’s Heritage Day and what a great day it turned out to be too. The wonderful thing about the Shuttleworth collection is on special days they take the aircraft and the vehicles out of their hangers. Nearly all the vehicles and aircraft can still be driven and flown so it’s a wonderful opportunity to get up close and personal.

Shuttleworth had booked me to perform 3 x 30 minute shows daily and to sing a verity of styles from the 1920s through to the 60s. This year I had a double page spread in the souvenir programme and by the time I performed my last show at 1.15pm the museum was getting very busy. There’s always a lot going on at Shuttleworth and as soon as I came off stage the flying displays began which this year included the 1928 DH60X Moth and the 1950s Percival P56 Provost T1. There’s always lots to see and both Paul and I enjoyed our ride on the 1921 Charabus.

For my final set I included some Rock and Roll which went down extremely well with the visitors. If you are friends with me on facebook you will be able to catch some footage which was taken on a mobile phone by Toby Webb. So thank-you for posting Tony and for sharing all your photos. 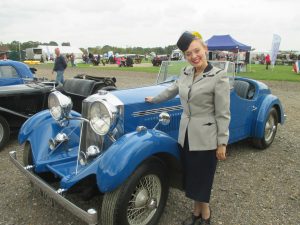 Next Saturday you will be able to catch me on stage in Leicester performing for a Victorian event in Victoria Park, Granville Road. LE1 7RU. I will be performing 3 x 45 minute shows daily at 12.00 noon, 1.15pm and at 2.30pm so if you are about it would be lovely to see you.

That’s all my news for now. I shall leave you with a few photos from this weekend at Shuttleworth.  Keep Watching and toodle Pip!