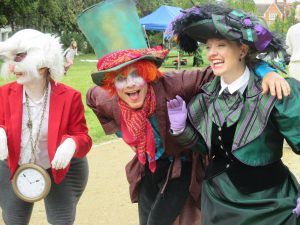 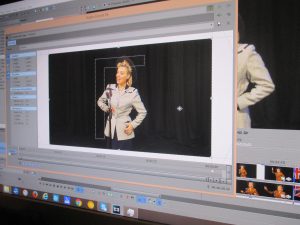 I’m sure many of you already know that this week is Battle of Britain week so it wont come as any surprise to learn that I’m fully booked for the month of September and I’m out every day this week performing my Battle of Britain shows. Today I had two WAAF shows back to back and tomorrow I’m in Amersham before heading onto Stoke Hammond and then over to Aylesbury. 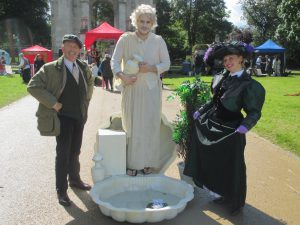 Paul and I with the Talking Fountain!

Cottisford in Oxfordshire for a private party. Once I’ve finished my two x 60 minute sets in Cottisford I will be making my way over to Hughingdon Manor near High Wycombe so all being well I hope to arrive on the estate about midnight which will save me the drive first thing in the morning – but more on Hughingdon later.

Last Friday I started on my film edits with David as we went through our 40s footage from the week before. I felt a new 1940s showreel was long over due and it’s been fun to

document my songs although trying to decide which ones to record and which ones to leave out has been a real nail biter. I recorded 17 numbers the other week and when it comes to making that final cut I need to be ruthless! At the moment David and I have made a rough cut which at the moment stands at 7 minutes which is way too long. We need to half it and perhaps I will make this my job after the weekend when I get back from Hughingdon Manor.

Last Saturday Paul and I were in Leicester working for the production company Enter Edem who staged the wonderful “Raucous Races” in Victoria Park. It was the first time I had had the pleasure of working with Enter Edem and both 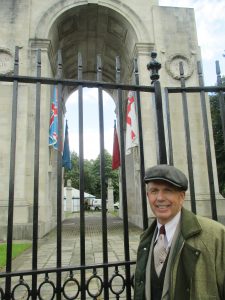 Paul by the War Memorial!

Paul and I were extremely impressed with the companies high production values. The event was extremely well organised and  involved many costume entertainers. Including characters from Alice in Wonderland and even a talking Fontana Philosopus Wishing Fountain.

Victoria Park was once the sight of Leicester’s Victorian race course so as you might expect the event had a Victorian theme with something of a creative modern twist. I was engaged to perform 3 x 45 minute Music Hall shows daily and it had been my intention to change costume in between sets. However the weather on Saturday included some heavy showers that in the end I decided to stay in my one costume as it was warmer due to all my foundation garments. This turned out to be the right decision and although at one point the sun did come out to play there were times when the temperature really drooped. 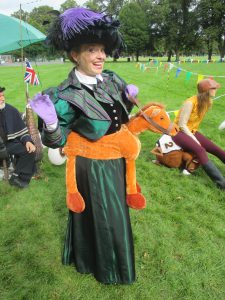 Ready for a Gallop!

However the show must go on and all the costume characters played on despite the rain while I continued to sing on regardless. Which just goes to show what a great bunch of professionals Enter Edem are.  While Paul and I were at the show we admired the great war memorial which was situated just behind the stage where I was playing and apparently  there is one identical in India in the city of Deli. After our show and while Paul and I  made it over to the tea tent we bumped into Richard III and I even had a quick gallop around the Horsey Hopper Races. We’ll what can I say I couldn’t resist!

Next weekend you will be able to catch me on stage working for the National Trusts 1940s event at Hughingdon Manor. I’ve been booked to compere the event and in many ways I have it quite easy as I only have one 45 minute singing set to perform at 11.30am and my other 45 minute set will be at 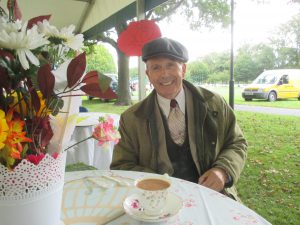 Paul Enjoying a Cup of Tea in the Tea Rooms!

3.00pm where I will be running a dance workshop. I’ve worked out all my routines so it will be fun to be doing something different. There will also be a fly past on both days weather depending. So finger crossed! If you are looking for something to do this weekend it would be lovely to see you as I will also be working with “The Polka Dots”, “Ross Hardman” and “Marina Mae”. So see you there!

Gosh is that the time I must get to bed. Next week I will be in Norwich but more on that in my next blog!