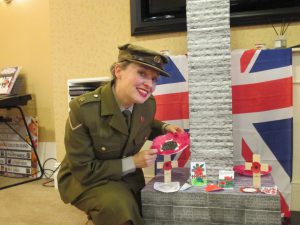 I’m sorry it’s been a little longer than normal since my last post but with remembrance I’ve had a steady stream of shows which has kept me very busy and constantly on the go. These last two weeks I’ve done the full Military British monty, ATS, WRNS and WAAF shows to tie in with the Remembrance season. I have to confess that by the time I’ve been getting home I’ve not really been in the mood to start on paper work and just a little too tired to start blogging. So today I’ve been catching up with both and next years contracts. I’m almost there as next week I will be in York and I want to clear my desk before I go away.

I’m taking a well deserved holiday and there is so much I want to see and do including a visit to the Cathedral and afternoon tea at the famous Bettys Tea Rooms. I’m particularly keen to see the bosses in York minster as many years ago I was a runner up in a Blue Peter competition where it was the task of each ch 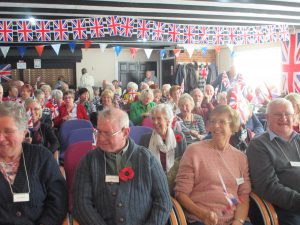 On Stage for the Friday Club’s Remembrance Meeting!

ild who entered to design a boss after the great fire which happened in 1984. My design was based on the new 20 pence piece which had just gone into circulation and somewhere I still have a piece of York Minster which was given to me as a prize along with my Blue Peter badge. I have two Blue Peter badges tucked away as I also won another one for my design I sent into the program for The Liverpool Garden exhibition.

Both my brother and I grew up watching Blue Peter and I have to confess I’ve never had the opportunity to visit York minster. I’ve skirted round York on my way to other places so this holiday will be a real treat. It’s taken me over three decades since I entered the Blue Peter competition but I’m looking forward to seeing the bosses at long last.  We also want to visit Harrogate and Paul is very keen to visit Whitby. I know Whitby is famous for it’s jet and Count Dracula. Two things that remind me of my school days as I played Frau Gretel in the school musical “Dracula Spectacular” back in the day and my English teacher use to wear a lovely pair black jet earrings which use to glisten and fascinated me when she was discussing Shakespeare’s Romeo and Juliet. Her earrings had some age to them I think as modern reproduction Jewry doesn’t usually have the same luster. 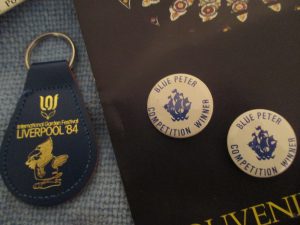 Tomorrow I’m back in Aylesbury performing a 1950s and 60s show just to break up the run and then on Saturday I’m over to Abingdon performing the last of my Remembrance Shows of the season. I’m keen to get my ATS shoes into the menders. As with all old things shoes do wear out especially when they are old to begin with and you do as many shoes as I do. When it comes to uniforms it’s important to keep everything up to snuff and lickity spit and I feel my shoes now need to have a complete new sole fitted. The uppers are starting to turn which I don’t like to see and the leather is starting to suffer. A job for a master cobbler. 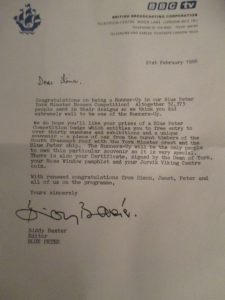 My Letter from Biddy Baxter!

On Sunday I will be back with David working on a couple of new videos and I hope it wont be too long before I have a brand new 1940s showreel to share with you all, which is all very exciting. I shall leave it here tonight  and when I get back from York I will have lots to tell you and many more photos to share with you all before I start on my Christmas Season.

I was just about to sign off only I’m pleased to say I’ve found all my paper work and my letters from Biddy Baxter along with my Blue Peter badges. Apparently 32,373 children entered the York Minster bosses competition in 1986 which was when the competition was run and 19,940 entered the Liverpool Garden Competition in 1984. Along with my badges I have a list of all the places I can enter for free which I’m just dying to try out now 30 odd years later! 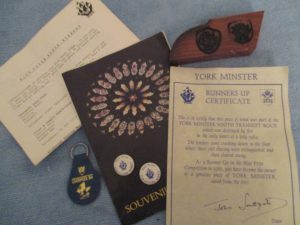