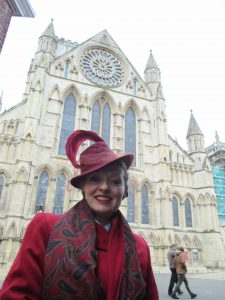 I expect many of you have already seen on Facebook my photos from my time away in York. I had been looking forward to this holiday for such a long time especially when I get so little time away from my shows. Unfortunately by Tuesday evening I discovered I had come down with an awful cold which was really disappointing when Paul and I had planned to visit so many wonderful places. By Friday we decided to come home a day early and I’ve spent much of Saturday in bed. Even now I’m warped up in scarfs and jumpers doing my best to keep warm although I hate not to be working so I’ve spent this afternoon on my paperwork. I had planned to go into London to visit the Hammersmith Vintage Fashion Fair but in truth I’m not really well enough to be out and I need to get well for next week as I start on the first of my Christmas shows.

Despite not quite being myself I’m pleased to say Paul and I did enjoy a full action packed Tuesday. We traveled up on 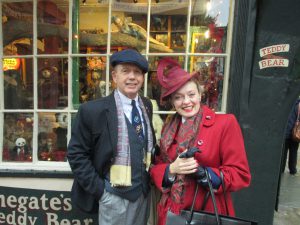 Paul and I at The Shambles! 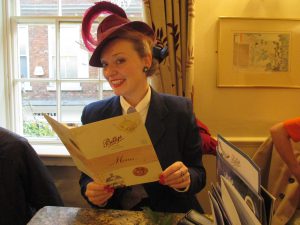 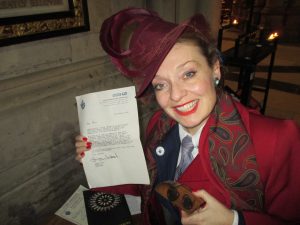 Me on the Chard Prayer Stool with my Blue Peter Prizes!

the Monday and then set off to walk into York the next day after breakfast. Destination – York Minster. If you have ever been into York you will know there is so much to see and do with lots of smaller churches dotted about which you can’t miss as you walk into town. The streets are lined

with interesting shops and architecture. Our plan was to walk and to see and do 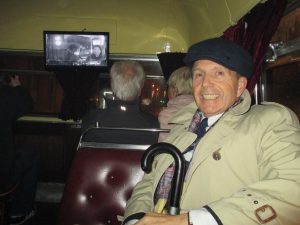 Paul Gritting his Teeth Through the Ghost Tour! 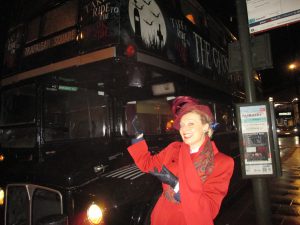 things as the mood took us on our way to the Minster. Certainly York doesn’t disappoint as it’s Christmas market was in full swing and we stopped to have a late lunch at Bettys famous tea rooms. Bettys have two lovely tea shops in York but we went to the one located in the Shambles.  There’s often a que to get in but we were very lucky as we timed it just right between the lunch time and the tea time rush.

The Shambles looks like something out of a Dickensian novel or Harry Potter film set as most of the shops are oak beamed and there isn’t a straight architectural line in sight. It’s a popular tourist haunt with a steady flow of Chinese and Japanese tourists as the streets lead up to the Minster.

I’d been wanting to visit the Minster for over 30 years. In 1986 I was a runner up in the Blue Peter York Minster bosses competition so I was keen to see the bosses and the Rose window which was damaged in the fire of 1984. As a child Blue Peter was one of my favorite TV programs  and I use to enjoy entering all the different painting competitions. As a runner up in the competition my prize was a piece of York Minster along with a certificate from the Dean, a Jorvik Viking coin and a Blue Peter badge which entitled me to free entry to all sorts of museums and galleries around the country.

31 years later I was dying to see if wearing my Blue Peter badge would still entitle me to free entry to York Minster and to my astonishment it did! Paul and I received a free guided tour thanks to Sophie and she showed us the Rose window and one of the prayer stools which still bears the chard marks from the 1984 fire.

That evening I had arranged for us to go on a vintage haunted bus tour around York only I’m sorry to say the tour was more than a little disappointing. You kind of expect these sort of tours to be a bit tongue and cheek but what spoiled it were the cut away film shots to an actress taking off Yvette Fielding as the film wanted us to believe she had had her head smashed in by a ghost while we were pulled up outside the chocolate factory – What a boar! By this point I was more interested in finding the nearest loo while Paul gritted his teeth through out. Not a tour I would recommend although the best part was when we got off the bus and our tour guide/ inspector Mr Robin Graves (I hear you grown) talked to us about the Shambles with-out the aid of a microphone. He was much better with-out his microphone as he had a habit of 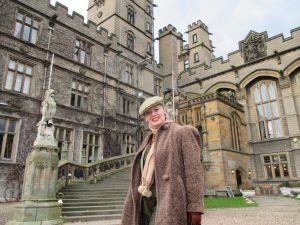 Back at Calton Towers! 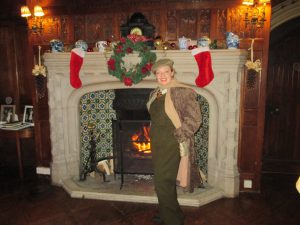 shouting down it at times and kept getting into a pickle which I couldn’t make out was part of the act or not. Needless to say Paul and I were more than pleased when it was over and we were back in our hotel.

The next day Paul and I made it over to Calton Towers. It had been our intention to go to Harrogate but as my cold was starting to become more prevalent we thought a walk around a Christmas market in a stately home might be less tiring and a warmer thing to do. So we both warped up in our country casuals and had a run over to the house. Of course I know Carlton Towers having sung there for the Queens Coronation anniversary in 2013. Not much has changed although in 2013 I was invited to stay the night in the Lord Mark suit and I remember being visited by a ghost in the middle of the night which pulled my leg – but that’s another story!

On Thursday we decided to drive over to Whitby although the weather had turned rather nasty. When you have a cold you feel the 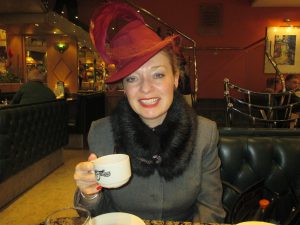 Lunch at Trenchers in Whitby!

elements much more keenly and we only made it as far as Trenchers Restaurant which is situated in the center of town. It was too cold and wet to make it up to Whitby Abbey although Trenchers Fish and Chips were very satisfying on such a cold wet day as we decided to make our way back after our meal with a brief stop in Pickering.

Now I’m back home it’s important I get myself together with the first of my Christmas Shows on Tuesday and a busy December booked into the diary.