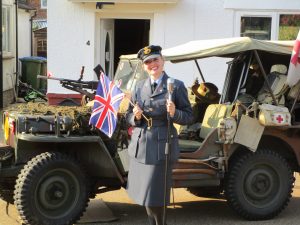 Dressed up for My Battle of Britain Concert! 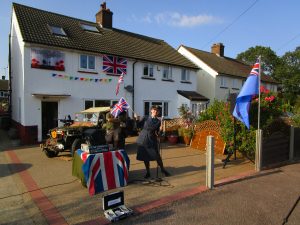 On Stage at the Crescent in Pitstone!

Gosh it’s been all change this week what with Boris Johnson’s latest announcement and the bringing in of more Covid-19 restrictions! As a result the Vintage Car rally I was booked to perform in Dunstable this Saturday has been put on hold until next year. However on the plus side as soon as I received the news, I was able to fill the date within the space of a few hours with a Driveway Concert.  So this Saturday you can catch me on stage at 3pm in Leighton Buzzard performing at Phoenix Close and on Sunday I shall be in Aston Clinton at Hyde Street singing all those wonderful songs from the 1940s, 50s, 60s & 70s.

As long as people socially distance and stay in family groups of no more than six watching me from their driveways, all is well. My Driveway Concerts are the one form of live entertainment which can go ahead which doesn’t break the rules. I’m the only entertainer I know who has been able to keep working this way and thank you to everyone for your wonderful support and encouragement. 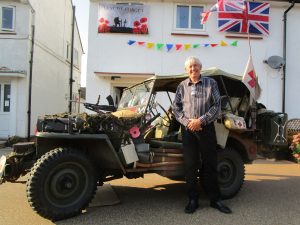 coming on fast. When I’m out running I see more conkers on the ground which when I was a child was a treasured possession. I used to make them into bracelets and necklaces and my brother would play with them at school. I’m not sure if children would even know how to play conkers these days. They seem far more interested in their mobile phones than the wonders of nature which come free.

With a bit of luck I’m hoping I will be able to keep my driveway concerts running through to the second week of October before the weather changes. Paul and I should have been performing 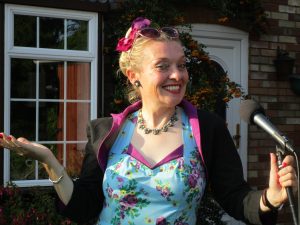 On Stage at Old Farm in Pitstone!

in Pickering for the 1940s event on the 9th, 10th & 11th October but due to the Covid restrictions our booking has been rolled over to 2021.

We have been enjoying glorious weather and last Saturday I performed a special “Battle of Britain” Concert for the residence at The Crescent in Pitstone. Initially I had been booked to sing for a private party, but with the change in the guidelines, the party wasn’t able to go ahead. I streamed my concert live on Facebook and to my astonishment it has had over 2000 views to date and rising. Of course this year was the 80th 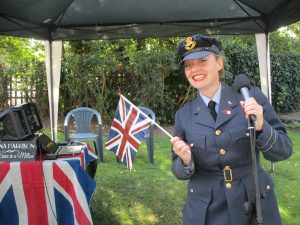 anniversary of The Battle of Britain and we had a fantastic turnout as all the local residents came along with their folding chairs to watch my show. My friend Joe who lives just around the corner brought his WW2 jeep, making for a fantastic back drop as our hosts Barry and Sue decorated their house in patriotic flags.

The following day, once again I performed in Pitstone at Old Farm as the cul-de-sac came out to see me. I sang all the favourites from ABBA to Marie Lloyd and there is nothing more rewarding than seeing communities coming together through music. 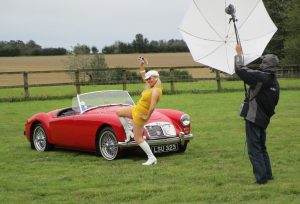 On Monday I was also able to squeeze in a Battle of Britain Show at short notice in Halton. The weather conditions were perfect as I sang the theme tune from “Dam Busters” and “Those Magnificent men in their Flying Machines”.

I believe in making the most of every opportunity and back in August you may remember me telling you I performed a Driveway Concert in the village of Cottisford for a Vintage Vehicle Club. Two of the members have cars from the 1960s – an MG and a Jag – I’ve always felt I had something of a hole 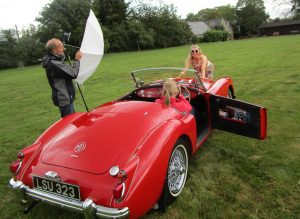 Shooting the Fashions of the 1960s!

in my photographic library when it comes to documenting the 1960s.

The Covid restrictions has made my work ever-changeable and when it comes to arranging out-door shoots I usually like to arrange them for the months of May and September. These are the months where the light is just right. To begin with I couldn’t get the dates to marry up but then at the last minute I managed to get everything to click together and yesterday we were able to go ahead with the shoot. 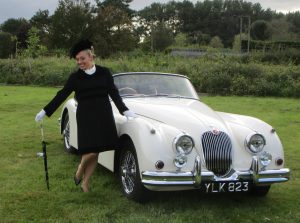 I was a little worried about the weather with the temperature drop and rain predicted but fortunately we were lucky.  My friends David and Anna gave us permission to shoot in their paddock as their friends Peter and John brought along their beautiful cars.

I’m certainly not short of vintage clothes and for this shoot I wanted to chart all the different styles of the 1960s from the Mad men office look, glamour party girl, white boots and the mini to the late 60s/70s psychedelic look. I did this using six out-fits. I confess I don’t often appear on stage 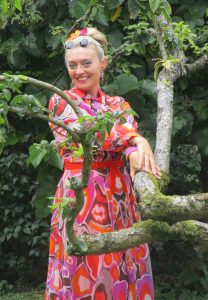 in mini skirts but I have all the clothes should the show require it which was why I wanted to make the most of this opportunity.

Mini skirts aren’t the easiest thing to photograph if you want the shots to look flattering which is why it’s often best to employ a women photographer. One lady photographer I’ve worked with on many occasion is Angela Adams. She has an excellent eye and I’m looking forward very much to seeing the photos which will be me as you’ve never seen me before.

Despite yesterdays wind I wore my hair down for some of the shot which will give me a more natural look. Normally I’m in the hair dresses for hours before hand but I hope by wearing my hair down this look will be more compatible with the 1960s. 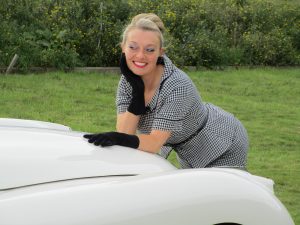 although three of the dates aren’t able to go ahead the other three dates are. Paul will be working with me on Monday night as we perform our Big Band and Swing Show “In the Mood” at Danny House and then I’m in Brighton the next day.

Thank-you for following, Toodle Pip and Bye for Now! 😉 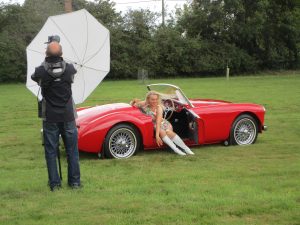