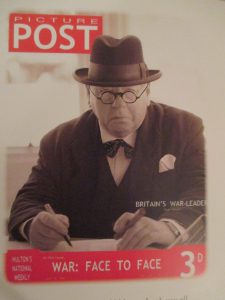 I’d like to begin my blog tonight by paying tribute to Peter Austwick who sadly passed away on the 16th Dec 18. Many of us on the 1940s scene knew him as Winston Churchill and he will be sadly missed by all his friends. I attended his funeral last week at Peterborough crematorium and it was a very fitting tribute to see all his fellow re-anactors in uniform saluting his coffin. The service was officiated by Kevin Bending which included some beautiful photographs of Peter’s life and footage of him speaking as Churchill. Our thoughts go out to Maime and the rest of his family. Peter was a gentlemen among gentlemen and he will be greatly missed. 30th Aug 1940 – 16th December 2018.

So many people came to pay tribute to this lovely man including fellow singers Christine and John from Timescape who were great friends of Peter. 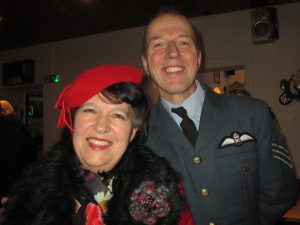 Christine and John from “Timescape”! 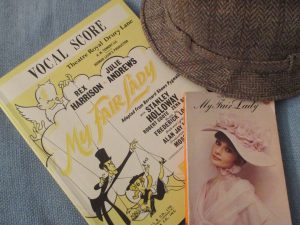 Putting the Show Together!

This week I’ve been working exceptionally hard. I’ve made a real start on learning “My Fair Lady” and I’m now at the point where I know all the words to the songs but not necessarily in the right order! I’m confident with the Eliza numbers as I already had them in my repertoire but the Higgins songs are quit in depth and there is much to remember. Once I master the continuity then the rest will fall into place and I’m now well on my way. I’ve also made a start on the costumes which isn’t hard as I have most items already in my wardrobe but there are a few pieces which will need to be especially made. The show will also have a pull up banner which I will be using as an aid to describe the different characters. I’ve already seen the initial designs and it’s great to see my vision coming together. So I still have lots to do and plenty to get on with in between times.

Apart from “My Fair Lady” I’ve been working extremely hard on selling dates. I’ve never worked so hard and this week I’ve sold a staggering 62 shows in nine days. It’s been hard graft but all the forward planning I’ve put in place has really paid off. The phone has been red hot! 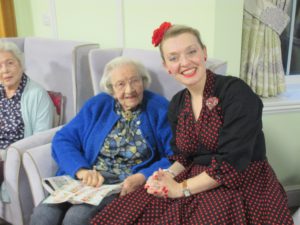 Meeting up today with Sybil!

It’s all about knowing when the opportune moment is and that time is now. This week I’ve completed and sent out most of my 2019 contracts, put Easter to bed, sold the bulk of December and I now only have five days remaining for Christmas. I’ve even been able to tied up a return trip to Italy for the Liberation Festivities in October which is all very exciting as it involves me singing in Italian, French and English.

As for France things are still very much up in the air with Brexit but I hope before long everything will come together. It’s very tough out in France at the moment as the French feeling is towns and organisations should be employing French artists first. Paul and I will definitely be performing at Pegasus Bridge on the 5th and 7th in Benouville and all being well we will be singing at the D-Day Breakfast when the veterans sail into Arromanches first thing on the 6th June. Until it has been  decided where the big international ceremony is taking place no one dare book a thing.

Today I had the pleasure of performing in Wimbledon for a 100th Birthday Party which was a delight.  It was Sybil’s 100th birthday and I put together a special program of songs which Sybil and her friends thoroughly enjoyed. Although I think the birthday girl might have enjoyed the risque numbers best of all which included, “Let’s do it”, “Hands Knees and Boomps a Daisy” and that little gem “My Winkles Fallen Out” which was written by Paul Spence who sadly passed away last December.

That’s all my news for now as I’m off tomorrow for my accounts weekend and I won’t be back until Monday evening. It’s great to get away from the distractions of home and to concentrate on one thing. Yes doing accounts is the most boring job in the world but the only way to get on with it is to shut myself away in a hotel and to knuckle down to the job in hand.

Toodle Pip and bye for now!