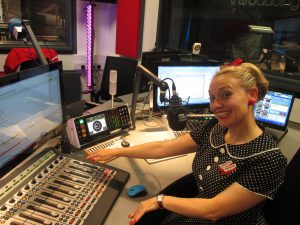 On the Justin Dealey Radio Show! 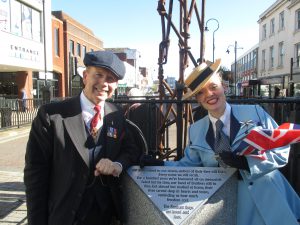 Paul and I by the Remembrance Stone!

Hello every-one once again I’ve had a full week having done a radio interview for BBC Three Counties radio on Saturday and then dashed back from performing in Fareham. Tonight I’ve been rehearsing my Halloween repertoire in time for tomorrows show in Marlow which is my first Spooky show of the season. I’m dying to try out  “That Old Black Magic/Witchcraft” arrangement which I commissioned from Richard new for this season. I also have the Elvis song “Devil in Disguise” and “Spooky” which are two new numbers for me which I haven’t as yet sung live in performance. I’ve been  re -looking at some of my Halloween arrangements as I wasn’t happy with them and it’s lovely to see the show coming together. After all there is nothing more thrilling than stepping out on stage with a brand new, tailor made musical arrangement! 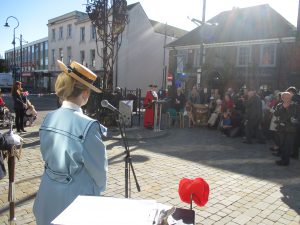 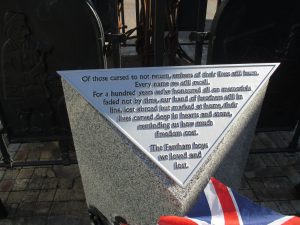 The next two weeks are going to be a mix of Halloween and Remembrance shows ranging in style from ATS, WAAF and WW1. So I have quite a variety of costumes to wear and musical content to sing my way through. On Monday Paul and I were down in Fareham as I had been engaged to perform for a WW1 ceremony which involved the mayor and all the local VIPs representing the services. A speech was given by the mayor as she unveiled a Great War commemoration stone and a bugler played “The Last Post”. 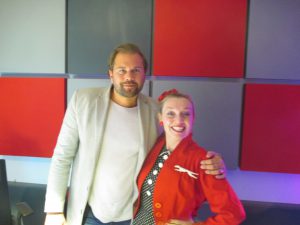 In the Studio with Justin Dealey!

I sang just prior to the unveiling and at the end as the VIPs made their way off to a special commemorative lunch. Part of my job was to get the local children from Good Manors nursery involved with the singing. The children were only 3 and 4 so very young and it soon became apparent in rehearsal expecting such little ones to clap for 3 – 4 minutes was a little too much.  When it came to performance I thought on my feet and gave the children flags instead which was easier for them to use and gave the press the shots they needed.

A day or two before I was on the Justin Dealy radio show for BBC Three Counties.  It’s a bit of a wacky show and Justin and I had such fun. He asked me to sing live “Johnny B Goode”, “Mr Sandman” and “The Boogie Woogie Bugler Boy from Company B”. As yet I haven’t heard play back but it might be another one for my web-site  radio archive.

This Saturday I’ve been engaged by Morrisons super market in Leighton Buzzard to open the Poppy Appeal by singing 20 minutes on 20 minutes off from 11am to 4pm all through the day. The lady that booked me is away on holiday and I’m hoping we can still go ahead as she wanted to be on hand to organize. I’m fully booked for the next three weeks so I’m not able to reschedule but all being well Saturday will go ahead as originally planed.

On the 6th November I will be in Birmingham  at New Street Station singing for the Poppy Appeal there but more news on that later.