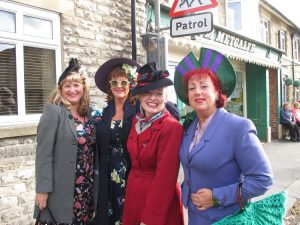 Meeting up with Friends in Pickering! 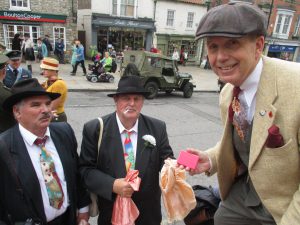 I’m sorry I’m late with my blog this week but to be truthful I really don’t have enough hours in the day to do all the things I need to do. Since returning home from Yorkshire on Monday I haven’t stopped and this Saturday I have an interview for BBC Three Counties Radio on the Justin Dealey show straight after my afternoon performance. I still need to prepare and then on Sunday I’m off down to Fareham to sing for a Great War commemorate ceremony.

Today I’ve been working with David on editing some new videos and it was good to complete the 1920s number “If I had a talking picture of you” and the traditional Scottish song “Loch Lomond” which is perfect for Burns Night and New Years eve. I’ve also been working with my web-designer on building my i-cloud account and a new sound bites page for my web-site. It’s still a work in progress but steadily it’s starting to take shape although I feel I need to have another look at some of the lay-out. 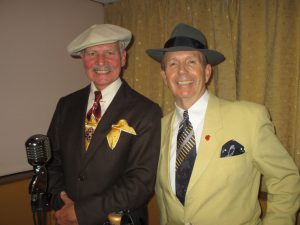 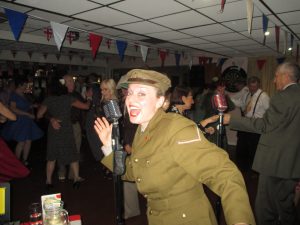 The Joint is Jumpin’!

If you follow me on social media you will know that last weekend Paul and I were up in Yorkshire performing for Pickering’s 1940s event. I had been booked to perform Saturday night at Pickering’s Recreation Club and to sing at Levisham Station on the Sunday for the North Yorkshire Moors Railway. The last time I had played for Pickering’s War Weekend was back in 2007 and naturally as you would expect much has changed. 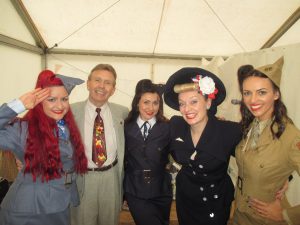 Paul and I with The Daisy Belles! 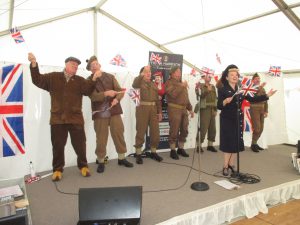 On Stage at Levisham with my Tiller Boys!

Tastes in 1940s music have moved on from sing-along songs to Lindy Hop Swing tunes which pleases the many dances who attend. Once every-one would be in 1940s costume and now the town attracts an influx of day trippers who all seem rather out of place amongst the 40s re-anactors and period music.

I plan my shows very carefully and I’ve learnt from experience that it’s important to have a varied selection and a couple of different options with-in my show plans. When Paul and I played at the Recreation Club it very quickly became apparent that the audience wanted to dance rather than a sing along so I quickly changed the music to swing. Paul sang a few extra Sinatra numbers which went down well with the audience including his new arrangement of “I’ll be Seeing You”. A lot of the audience knew the DJ Windy as they danced through to midnight

The same was true at Levisham station. I opened with my WAAF show but quickly moved it into a swing set as many people wanted to dance. Sunday was very wet but Paul and I had a lovely heated marque to perform in and we worked along side three girl harmony group “The Daisy Belles”. On this occasion we also had a sound crew so we didn’t have to worry about rigging our PA. With so much rain we were rather relieved we could use the sound crews PA and not drag our own down the platform. Their rig was very powerful and perhaps a little larger than needed for the size of the marque, but as the audience were sitting back behind the dance floor it all seemed to even out.

Pickering is one of those events where it’s easy to meet up with  friends. It’s one of the last 40s events of the season and attracts a great number of re-anactors. Next week I will be opening the Poppy appeal in Leighton Buzzard before performing a series of Halloween shows. 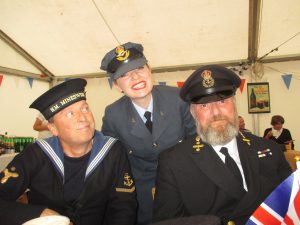 All the Nice Girls Love a Sailor!

More news on that later. In the mean time enjoy my photos and keep following! 😉