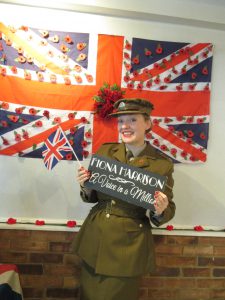 On Stage at The Friday Club!

It’s been a full week of Remembrance having performed fourteen “Pack Up Your Troubles” and “We’ll Meet Again” shows in seven days. I can now take it a little easier as I’m just down to one a day this week. This Saturday Paul and I will be on stage at Thorner Victory Hall in Leeds for a special remembrance dinner dance. I’ve been engaged to perform 2 x 45 minute sets. The first is to feature songs from the Great War and then for the second set Paul and I will be performing Swing tunes from the 1940s.  On Sunday I shall be in Manchester at Sale Moor performing my WW1 “Pack Up Your Troubles” show for a private event before heading home to Bedfordshire.

Last Saturday I had the pleasure of performing a mixture of music from the first and second world wars in the village of Sherington at St Lauds Church. The whole village turned out 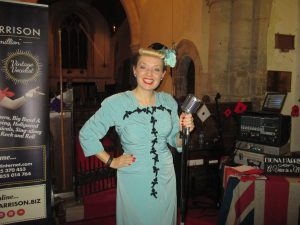 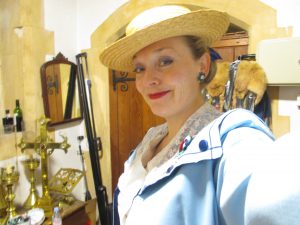 Getting Dressed in the Vestry for my WW1 Set! 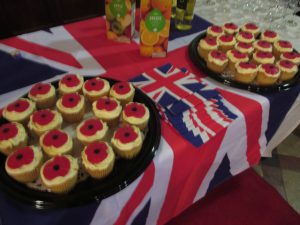 to support the event as I opened with a selection of songs from the first world war and then performed some favorites from WW2 for my second set, which also included songs from the musicals. During the interval the organizers had made a wonderful section of poppy cup cakes which were thoroughly enjoyed by all.

In fact this week I’ve been amazed by all the lovely remembrance poppy cakes people have made to commemorate the end of hostilities. On Sunday I had three shows back to back and I’ve been working not just as a singer in a show sense but in a ceremonially capacity too. All poppy cakes consumed have been thoroughly enjoyed and have helped to kept me going. People don’t always realize just what hard work it is going from show to show singing morning, noon and night. It requires skill and a lot stamina.

This season I’ve enjoyed mixing my repertoire and thanks to a ladies suggestion who heard me sing at New Street station in Birmingham on Tuesday I have been including “That Lovely weekend”.  A beautiful song I’d almost forgotten about, in fact the centenary has inspired me to resurrect a few numbers I’ve not performed in a while. I have so many songs in my repertoire it’s been like a breath of fresh air to pull out some songs from my back catalog and good for my audiences too.

When it comes to the music of the 1940s there seems to be far too much repetition among artists. All performing the same songs bought off the internet with very little creativity or imagination. All my backing tracks are custom made which makes such a difference.

This is all my news for now but next Saturday I will be in Moreton in the Marsh. 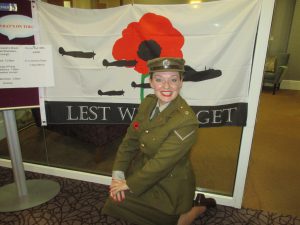 After my Show in Maids Moreton!