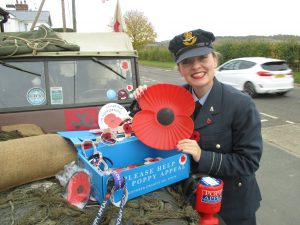 Pitstone and the Poppy Appeal! 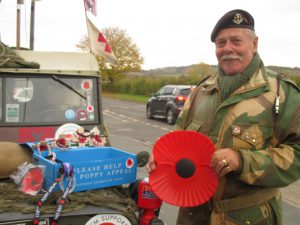 It’s November and after Halloween and Guy Falkes Night it’s now full steam ahead with Remembrance and the Poppy Appeal. If you have been following my  social media pages you will know I have a show for every season. My Halloween show “Fly me to the Moon” has been very well received this year and I’ve enjoyed singing my new arrangements. I’m now performing two to three shows daily for the next couple of weeks with remembrance and the great war centenary so it’s important I don’t forget to pace myself. 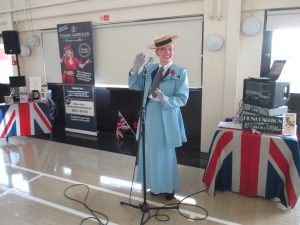 Pack Up Your Troubles in Princes Risborough! 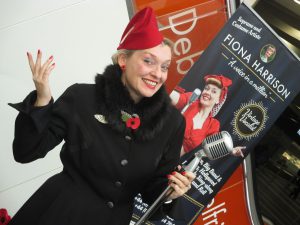 Ready to Roll at New Street!

Last Sunday I was pleased to make it along to see my friend Joe Marling other wise known as The Poppy man of Pitstone as he works tirelessly to raise money for the Poppy Appeal. Every year he stands out-side Mason’s Stores in Pitstone with his 1940s WW2 Jeep filling tins for the appeal. I think he’s now up to his 13th tin so keep up the good work Joe! 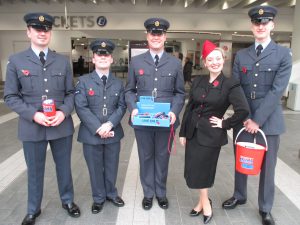 Collecting with the RAF! 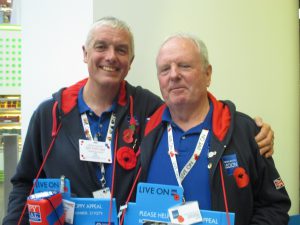 On Saturday I had the pleasure of performing in Princes Risborough my WW1 show “Pack up Your Troubles” and this coming Saturday I will be in the Village of Sherington performing the songs of WW1 & WW2 for a special event at St Lauds Church. Today I’ve been in St Albans, tomorrow I’m in Watford and High Wycombe, Friday Leighton 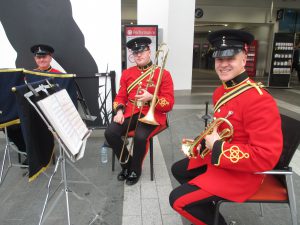 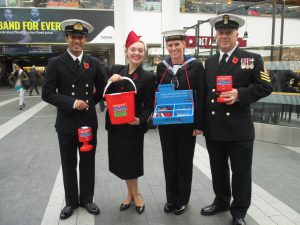 Collecting with the Navy!

Buzzard and Hitchin, Saturday I also have an earlier show in Northampton and then on Sunday I’m in Aylesbury and onto Maids Morton for my evening performance. 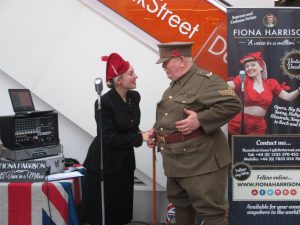 On stage with Recruitment Sargent Alan!

My day started early as I left Leighton Buzzard at 5am in the morning so I would be at New Street station for 7am. Driving to Birmingham isn’t a problem but finding where you need to go once you are in town is. It quickly became apparent that my Sat Nav  was of no use at all in the city as many of the roads are one way, pedestrianized or closed for roadworks.

In the end the only way I was going to make it to New Street station was to find someone with local knowledge. Fortunately I was able to pick up a very nice crane operator by the name of Mark who had helped to build part of the city. With Mark’s local knowledge he was able to direct me to where I needed to go. At times even Mark  found it difficult with so many roads closed and I certainly couldn’t  have made it to New Street and the Poppy shop with-out his help him.  Such a kind man who I wanted to pay but instead he insisted I put the money into the Poppy fund. So thank-you Mark where-ever you are for your generous kind help and for being such a gentleman. I couldn’t have done it with-out you!

Once I had made it to the Poppy shop I was able to meet up with my contact Yanto and a very nice lady who helped me down to New Street station with my equipment. On the face of it it isn’t far but when you have two sack barrows full of equipment and high heels the walk seems like a marathon. Unfortunately it’s quite a slope from the shop to the station and I got my wheels caught in the tram tracks  trying to control the weight of the load. Once free it was straight into the station as I set up by the  escalator and the RBL stall.

Our next problem was access to electricity which Yanto was able to sort out with the station manager and Network Rail. Then the retchet went on my mic stand and due to the morning dampness the stereo had stopped working on my AMP which meant I only had sound coming out of one speaker. Fortunately I always carry spares and as the morning wore on the stereo returned. It was a heart stopping moment and I must have aged a year yesterday with all the worry!  I was mighty pleased when the stereo returned which just goes to show an amp needs to be kept in the warm and not left to get cold as it causes a condensation issue and effects the stereo.

My plan was to sing 20 minutes on 20 minutes off all through the day from 8am – 4pm but with the Army band having set breaks we ended up going with the flow performing as and when so as to keep the music constant. Once I’d ironed out all the technical issues and started singing there was a wonderful atmosphere at the station as every-one pulled together to do their bit for The Poppy Appeal. All in all I think I sang my way through  80 numbers performing Opera to Rock and roll and a selection from the 1940s too. So thank-you Yanto and to all the many volunteers who helped to make me feel so welcome. It was lovely to work with you all and here’s to next year.

Next week I will be in Leeds and Manchester but I shall tell you more about that in my next blog. 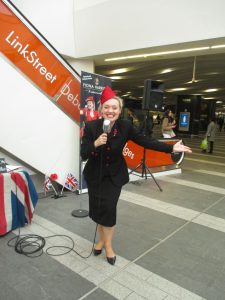 On Stage Doing My Bit!