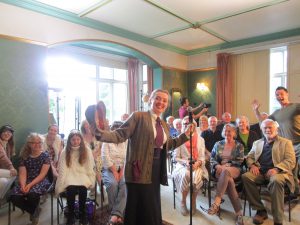 On Stage at Norcott!

As usual time is ticking away and I have so much to get ship shape for Normandy. I leave tomorrow and I’m just making the last minute alterations to my show plans. I’m packing my van and worrying about how I’m going to get everything to fit in as it’s important to carry spare costumes. One can never be too sure about the Normandy D-Day weather. I’ve known it to pour down and then for it to turn to scorching sunshine all within the space of a few hours. 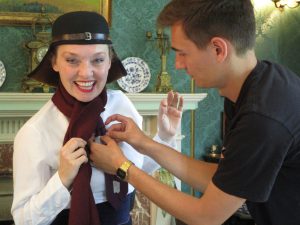 Getting Miked Up as Alfred Doolittle!

Itinerary to date. Paul has also been asked to perform at a BBQ in Benouville on the 4th June so we have a very full program ahead of us and we look forward to welcoming you all to our shows. 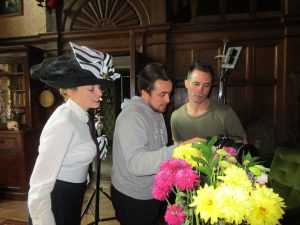 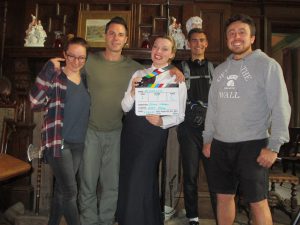 Me with the Dragon Egg Crew! 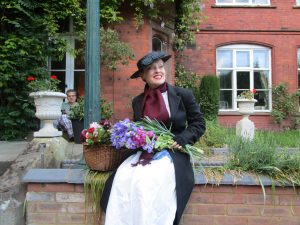 Wouldn’t it be Lovely!

On Monday I was shooting a new promo film to advertise “My Fair Lady”, which I have adapted into a 60 minute one woman musical extravaganza. The best bit is I get to play all the roles. It’s very fulfilling to do, as it uses all my skills as a singer, actor, dancer, writer, narrator and designer . This musical made such an impression on me as a child, so it probably wont come as any surprise to learn that when I was 7 or 8 I use to give musical performances of the songs from the show in the play ground. So to have the opportunity to turn it into a one woman show, it’s a little like my life turning full circle.

Monday’s shoot was very intense and a big thank-you goes out to Julius, Karl and the Rost family who allowed us to use their family home Norcott Court as the films setting.  We started shooting some of the musical numbers in long shot from 1pm and at 3.30pm we invited an audience of about 30 people which filled the drawing room. I then gave a full performance and played the show 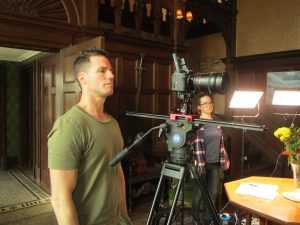 Judson Working Out the Shot! 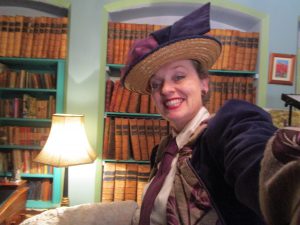 through in it’s entirety after which Julius very kindly served tea and cucumber sandwiches in the dinning room.

The audience all seemed to have a wonderful time and after they left Judson and I set about filming the cut away shots, some of the spoken word and interviews using different locations in the house and garden. I was thrilled when Judson of Dragon Egg Media agreed to take on this project as he usually makes feature films so to have someone of his talent and ability agreeing to do a small promo film for me I feel very honored indeed.  On this occasion we had a crew of 4 and our sound recordest had just flown back from LA.

It was very interesting to see some of the techniques they were using as cameras are much smaller these days and as such more movable in tight spaces. The camera we were working with on this shoot was hand held and had a gimbal attachment for smoothness. Also another interesting attachment was to place the camera on rails while the tripod was static to create a dramatic zoom in effect which we used for the scene “There you’re slippers and there!” 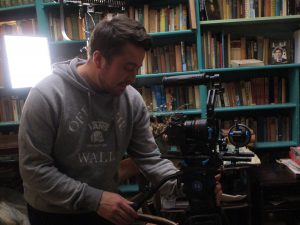 Setting Up the Shot in the Library!

I can’t wait to see the rough cut which will be after I return from France. Something to really look forward to. I wont start the proper edit with Judson until July as we are both very booked up. I wish I could tell you more about the shoot but I’m afraid I’ve run out of time tonight and I still need to finish my packing. I look forward to catching up with you all very soon. I wont be back in the office until the 12th June when I will have lots of lovely new photos to share with you all. In the mean time  here are a few behind the scenes shots from Monday’s My Fair Lady shoot.