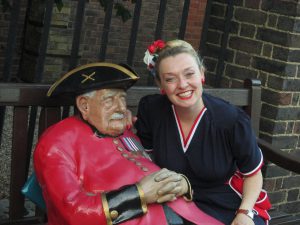 As you can see after a busy week I’m back at my desk burning the midnight oil keeping you all up to date with my latest news. I don’t mind admitting to Blog once a week as I do is a serous commitment. With my dyslexia it usually takes me between three to four hours to write a blog and often I don’t get to bed before 2am. Social media is now the life blood of being a performer and it’s important I keep you all up to date with whats happening and where I’m going. So do keep following my news as a lot of work goes into what I write and it’s lovely to hear when I’m out and about that you follow me. 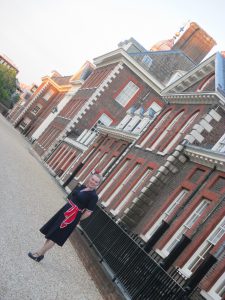 In fact September is exceptionally busy and I have much to write. Once again I’m fully booked for the month and today I’ve been performing the first of my WAAF shows with the run up to Battle of Britain week and all the celebrations to commemorate the RAF centenary. Today I’ve been working down in Camberley, tomorrow I’m in Abingdon then Peterborough on Wednesday, Woburn Sands and Milton Keynes on Thursday, Aylesbury on Friday and so on and so forth.

Last Saturday I had the privilege of performing in London at the Royal Chelsea Hospital CP Club. In fact I first applied to sing there back in 1998 and thanks to a recommendation the opportunity eventually came to pass  20 years later. So I guess the moral of the story is if at first you don’t succeed try, try again although in this case I think it was due entirely to my friend Jim who was able to pass my card onto the right person. 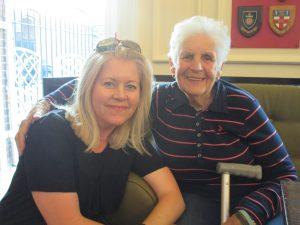 So thank-you so much for your kindness Jim and for making this happen for me.

A lot of work and care goes into all my shows and when I was asked to perform at the Chelsea Pensioners Club I was advised that the pensioners love to sing-along although they do get an awful lot of Opera and Vera Lynn. This is why I thought my 20th Century show would go down well with the audience. I was right and it’s interesting to note the changing tastes.  The songs I think which were most popular were the Music Hall, Hollywood Musicals and the Rock and Roll years from the 1950s, 60s and 70s. I even had people up and dancing to “I Know him so 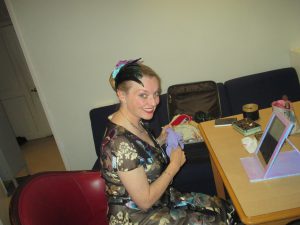 Getting Ready For My First Set!

Well” from Chess and “My Heart will Go On” from Titanic. The 1940s although loved has been somewhat over played and I finished the first half of my show not with “The White Cliffs of Dover” and “We’ll Meet Again” but with “So in Love” from “Kiss me Kate” which is one of my favorites. I was even requested to sing Edith Piaf and I managed to squeezes in La Vie en Rose.

On this occasion I had the pleasure of working with my friend Kim who is the most glamorous sound engineer in the business. She is a fantastic hair dresser and the combination of having a sound engineer who can do hair is priceless. I 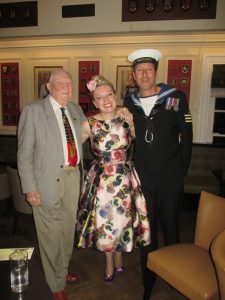 often feel my hair lets me down and although I can do all the basic hair up dos I often think something is lacking. Sometimes it’s just a change of hair style which can add a whole wealth of dimension to a performance and on this occasion Kim was able to work her magic in minutes. She give me a Downton Abbey look for the first half and a slight 60s beehive for the second which went beautifully with my dresses.

This coming Saturday 8th September you will be able to catch me on stage performing in Priory Park, Dunstable for “Proms in the Park”. The BBC Concert orchestra are playing live at the Royal Albert Hall which is being televised on a big screen into the park so people can enjoy the music and bring a pick-nick. I’ve been booked to perform 2 x 30 minute sets at 6pm – 6.30pm  and during the interval which will either fall at 8.40pm – 9pm or at 9pm – 9.20pm depending on how the concert pans out. At the moment I’m not sure if I will be 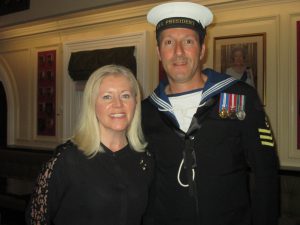 Kim And All the Nice Girls Love a Sailor!

performing both of my sets on the stage in front of the big screen or one set on the roof of Priory Church. I may not find out until Saturday as it’s down to the sound company to rig the stage. Although it would be exciting if I was up on the roof. I’ve not done a concert like that before but if know me I’m game for anything!

I still have my songs and dresses to sort out as these sorts of concerts often require big gowns. I’m just praying the weather will be fine on Saturday evening. I only received the BBC concert orchestra’s play list today so it’s up to me to complement their selection which is fairly 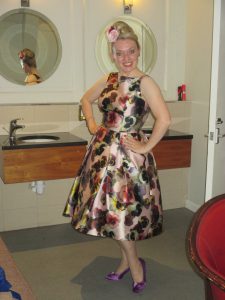 Backstage at the CP Club!

traditional with all the usual ingredients you expect for Proms. As yet I haven’t quit decided what I will sing but I think it will include some Hollywood along with something appropriate to tie in with the RAF and Great War Centenary.  So bring your pick-nick and do pop along to see me on Saturday as it’s promising to be a wonderful evening.

Next week it’s full steam ahead with WAAF and Battle of Britain shows. I will be performing at Hughingdon Manor on the 15th & 16th September for the National Trusts 1940s event but I shall tell you more about that in my next blog. 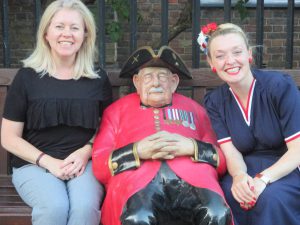