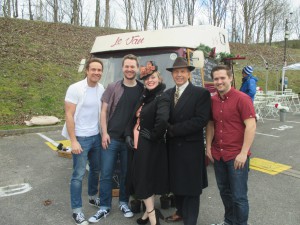 Paul and I with Eugene and the Levys!

I’m afraid I can’t blog for long tonight as I’m up to my eye balls with computer mayhem. Some of you may have already noticed that my web-site is grinding to a halt due to all the information it now carries. I’ve writain over 800 blogs and it’s now straining to cope with all those words. I’m seeing Rachel on Wednesday and we are going to have a bit of a spring clean so my blog and news feeds can run freely. Rather annoying my news feed on my home page hasn’t changed in weeks so it’s important we get it fixed as soon as possible! 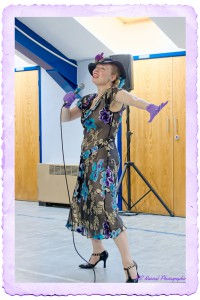 On Stage at Edgewear!

today just before I was due to go on stage and I had to change over onto my back up system of mini disk. In many ways mini disk is more reliable and theatres prefer it to net books and lap tops. I now have a very busy two weeks ahead of me and some how or other I’m going to have to get it fixed between shows. I’ve two different shows back to back tomorrow so I’ve been working hard to try to work out my play lists using the mini disk system. It’s the last thing I need at this very busy time of year but at least I do have a back up!

On a brighter note this Sunday Paul and I were singing at Adams Park Stadium for the High Wycombe Vintage Family Fair. While we were there we had the pleasure of working with 1950s Rock and Roll Band “Eugene and the Levys” who were just great. You can’t beat some good old-fashioned Rock and Roll as they played their way through classic Elvis, Chuck Berry and Buddy Holly numbers.

I must go now as it’s late and I have so much I must still do. I hope when I post this blog the right photo will come through onto Facebook as it’s been chosing photos at random which is very annoying. Once again my thanks to Robert Etsell who took some wonderful photos of me in Edgeware last week when I sang the music of the 1920s and 30s.