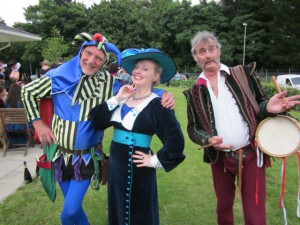 Me at the Blackadder Ball in Aldershot! 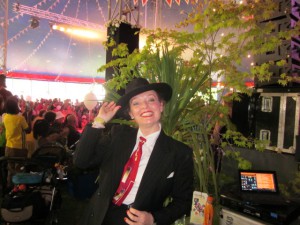 Hosting as Evette the Spivette in the Big Top! 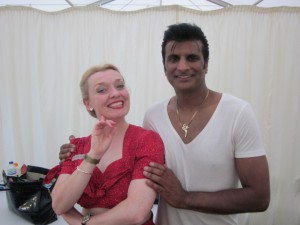 After the show! Me with Sal Bashir the Asian Elvis! 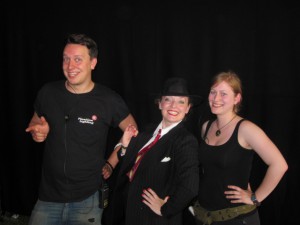 Me with Stage Manager Kate and Crew!

When it comes to songs and diversity from this weekend all you have to do is name it and I bet I did it. From Opera to Rock and Roll – from Music Hall artiste to Evette the Spivette – Yep I did the lot and what fun it was too! On Saturday night I was booked to sing for the Queen’s Own Gurka Logistic Regiment at Gale Barracks in Aldershot. I was booked by Captin Lawrence to sing for their Summer Ball and this year they pulled out all the stops with a Blackadder theme. All the officers and their guests came dressed in costume and the hall was dressed Medieval/Tudor style with suites of armor, heraldry, candles and a draw bridge. The bar was done out WW1 style and Captain Lawrence booked a whole range of entertainers and musicians from a strolling minstrel and court jester, to a military and function band not to mention a fun fair. My job was to sing during dinner a range of Music Hall songs which would have been popular during WW1 which I did naturally in costume. I know from experience Mess dos can be noisy affairs so I used my 4,  300 speakers which gave me the volume of sound I needed to recreate the Music Hall. In fact this was exactly how Music Hall use to be with people eating and drinking while the acts would play. Out of all the Mess dos I’ve done this has got to be the best and my set went down really well. A great time was had by all and they even had a” stop me and buy one” ice cream seller and photographer www.surreyeventsphotography.co.uk

I was only down to sing from 8pm – 9pm but everything was going so well I stayed much longer and I didn’t get away until midnight. As I was due to be in East Ham the next day I continued round the M25 and stayed the night at the Premier Inn in Redhill Reigate before heading off early Sunday Morning to Central Park for The Mayor’s Newham Show. Once again I was booked because they wanted a WW1 act and a compare two roles I can fill so I was engaged to host the Circus Big Top and what a great line up it was too. We had Mo Staffa and Daisy Fantasy present a magic act “Two for Tea” from www.otherhalfproductions.com, The wonderful Bella Kinetica and partner perform a roller skating and trapeze act plus Sal Bashir the Asian Elvis who closed the show with his tribute to the King. www.rockersal.co.uk  Then there was me of course with my “Pack up Your Troubles” WW1 Show and Big Band and Swing set not to mention a real mix bag of in-between songs as I introduced each artist. I really enjoy hosting and comparing  which is something I hope to do a lot more of in the future. On this occasion I was asked to do so as “Evette the Spivette”. A costume which works so well with swing although I did nearly flush my braces down the porter loo at one point. The only problem with braces and dressing like a man is my pumming is different and I have to be careful everything is out-of-the-way when I flush! Despite a little bit of rain in the morning we were blessed with good weather all day and the show was packed. I wouldn’t be surprised if the event attracted  something in the region of 20,000 visitors. So a big thankyou to Kate our lovely stage manager, Dennis on sound , John on lights and all the staff and volunteers who made this event possible

I’m now in the recording studio for the next couple of days and then on Saturday I will be in Morton in the Marsh for Heroes of Moreton as the town remembers the Great War. I will be on stage at 7pm performing my WW1 show “Pack Up Your Troubles” and you can get tickets by going to the web-site www.heroesofmoreton.com

Thanks for following and Toodle Pip!