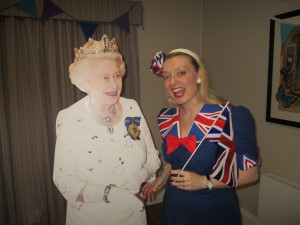 June has been something of a patriotic month what with one thing and another and last weekend was no exception. On Friday I had two “Happy and Glorious” shows back to back to celabrate the Queens Birthday and then on Saturday Paul and I were playing in Coventry at the Greyhound Inn for a very special occasion. This was my third engagement at the Greyhound and one thing I’ve learnt is when the Greyhound Inn put on an event they do it really well and pull out all the stops! 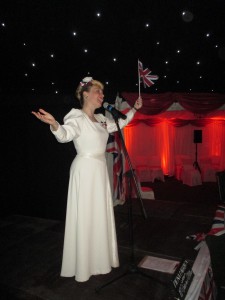 1940s sing-along flavour mixing classics such as “Rule Britannia”, “Roll out the Barrel”,”Jerusalem”, “I Vow to Thee, My Country” along with “Leaning on a Lamppost “and “Kiss Me Goodnight Sergent Major” while concluding with British themes and “Land of Hope and Glory”. It was a very special night as over 200 guests had been invited and all the profits were going to the Armed Forces charity SSAFA. As SSAFA was formed in 1885 I thought it appropriate to include some older sing-along tunes from WW1 which seemed to go down well with the audience. There was also a  wonderful marching band from Coventry and one lady from the audience, 94-year-old Joyce, better known as “Joyce the Voice” gave a fantastic rendition of “My Way” which brought the house down. Paul also sang and mixed sound for me as we performed 2 x 45 minute sets and enjoyed the ambiance of a fabulous patriotic evening. So a big thank-you goes out to Leigh and all the 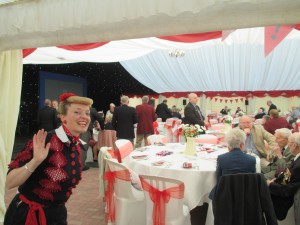 Behind the Scenes at The Greyhound!

staff at the Greyhound for putting on such a wonderful event. You should all feel very proud!

Paul and I didn’t get back to Leighton Buzzard until 1.30 am so we decided to take it easy on Sunday and opted for a lay in. Last week I had considered about dashing into London and visiting the Vintage Fashion Fair in Hammersmith. I still have a few items on my shopping list which I can only source there but as it turned out we decided to go out for lunch instead at Cubblington. Afterwards I took Paul to see Ascot House which isn’t far from where I live. I love Ascott House as we would 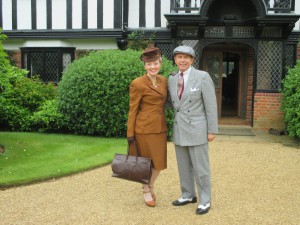 Paul and I at Ascott House!

often visit when my brother and I were children during our summer holidays. My mother would always prepare a picnic and I have many a happy memory of playing in the grounds. The house is owned by Lord Rothchild and looked after by the National Trust. It has a wonderful collection of art and oriental porcelain and the house is set in over 30 acres. It was lovely to visit the house again after so long. I had visited the gardens a few years ago and belive it or not I had planned to film my “If I were the Only Girl in the World” video there. But sadly when it came to it we got rained off and I lost the only day available. In the end I found a house 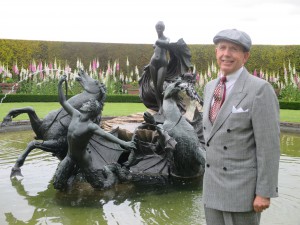 Paul with the Roman Goddess Venus!

in Aspley Guise and filmed two days later once the rain had cleared. So it was lovely to see the house again introduce Paul to Venus!

To-day I’ve been working with film maker David Pustansky on my edits. I hope it wont be too long before I have some more videos to share with you all. After producing the 1950s and 60s showreel at the start of the year I’ve been keen to have a few full versions of some of the songs. So today we were able to finnish “Mr Sandman” and “Diamonds are a Girls Best Friend”. We’ve also made a good start on my 1920s and 30s show reel although with a very full 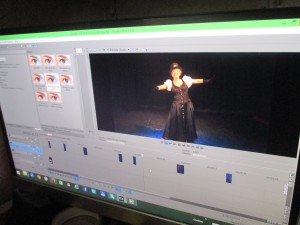 summer diary it may not be until late July or mid August before I have a day free when I can sit down with David again. It’s all very exciting and I have some new arrangements in production and dresses being made for the next stage, which is the 1940s. In January I will be filming the Music Hall numbers and then in February the Opera. So keep watching this space and I shall keep you posted!

This week it’s all about patriotic shows with a Pearly Queen one tomorrow and then two back to back on Wednesday. My evening show is taking place at the Officers Mess at Northwood and I’ve been asked to perform my WW1 “Pack up Your Troubles” show. It’s Armed Forces Day on Saturday and this year you can catch me on stage at The Royal Oak in Aston Abbot – but more on that in my next blog!

I’ve just seen the time so I shall leave it here tonight. Keep Watching and Toodle Pip!