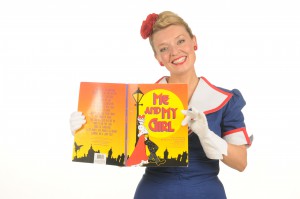 Me and My Girl – The Best of British Songs! 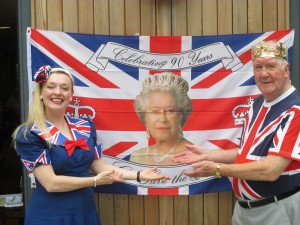 King David, The Queen and I at St Bedes Garden Party!

It’s just a quick blog tonight as I’m still trying to get everything sorted from France and catch up with my paper work and e-mails. If you have been following my face book pages you will have seen me out and about performing “Happy and Glorious” shows in my patriotic dress to tie in with the Queen’s 90th Birthday. Some of you probably have already realised that many of my dresses are interchangeable. My patriotic blue dress is one of my designs which I based on a 1940s pattern and re-modeled with interchangeable collars and cuffs. It’s proved a very useful costume as I have American, French and British combinations depending on whom I’m entertaining and the type of show I’ve been engaged to do. This weekend I changed to union jack collars and cuffs in honour of the Queens birthday which has made for a refreshing change from my usual white-collar and red piping combo.

My “Happy and Glorious” shows have been going down really well as I’ve been mixing songs like “Rule Britannia” with “Me and My Girl”, “Jerusalem” and “Burlington Bertie from Bow” which have all added to that wonderful Best of British theme. 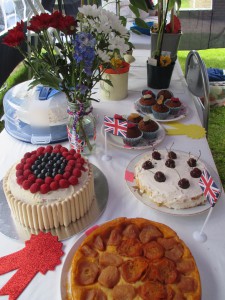 On Sunday I was engaged to perform for a private garden party in Bedford which I really enjoyed. There’s nothing I enjoy more than a summer garden party and just like me every-one had turned out in their red, white and blue. Although we had a little rain the large doors folded back and opened up onto the patio so there was lots of space for every-one to move freely. I had had the call to go down to London to perform on the Tatershall Castle river boat for that evening but after due consideration I didn’t feel I could have got down into London in time for an evening performance. There’s so much to factor in when you take into consideration the traffic and parking so I felt I had made the right decision and enjoyed the Queens birthday performing in a beautiful garden in Bedford instead. I even managed to steal a photo with King David in his wonderful union jack T-shirt and photograph the cake competition. 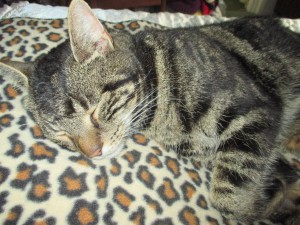 Sleeping Tigger on His Favourite Rug!

Today I have been performing in Wendover with shows scheduled for the rest of the week. I was pleased to make it along to Joe’s after todays show as I had a belated birthday present for him from Normandy and both Joe and Shirley very kindly invited me to stay for tea. I’m keen to get back into my exercise routine and make it down to the gym tomorrow morning. I sprained my ankle on Saturday while I was out running. Fortunately it was just a light sprain and it’s healed now but I do seem to be a bit accident prone.

Speaking of which poor Tigger was at the vets when I got back from Normandy and came home later that day. Earley in the week he had caught a bird and one of the bones had stuck in his throat. Fortunately the vet was able to remove it and he’s now back to his normal self purring and eating like nothing had happened while enjoying a nap on his favourite rug!

Well I must dash as I still have e-mails to do. Keep Watching and thank-you for following!