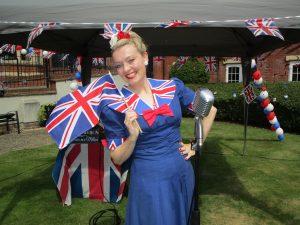 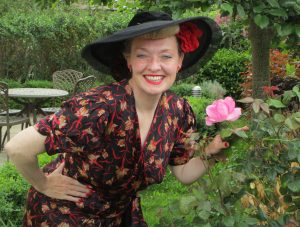 Don’t Sit Under The Apple Tree in Abingdon!

I’m busy tonight tying up lots of lose ends before I head off tomorrow on holiday. I’m having a couple of well earned days away with Paul and Poppy which we have been looking forward to very much.  We have booked to stay at a delightful farm house just out-side of Bristol in the village of Wick and it’s amazing just how many last minute things I need to do before I can get away tomorrow. I’m a little worried about the weather as I don’t want to over pack but then if the weather changes which it’s likely to do I don’t want to be caught out either.

This last weekend has been wonderful weather wise and it’s been great to wear my summer clothes at long last. This week I’ve been performing “Don’t Sit Under The Apple Tree” shows in Oxfordshire along with “Happy and Glorious” shows with the run up to the Queens official birthday. I expect many of you have caught my live streams on Facebook.

On Saturday I was in Kettering performing for a wonderful garden party and then on Sunday it was all change with my Swinging 50s, 60s & 70s show. I had been booked to sing at The Kings Arms pub in Newport Pagnell. The booking came 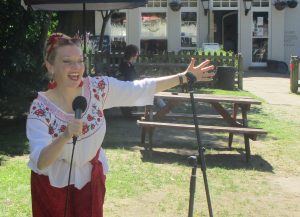 Sound Checking at The Kings Arms!

in at very short notice and as I was free I was happy to oblige. The weather was perfect and initially I had been booked to start my show at 2pm but due to the football everything was delayed. Fortunately that wasn’t a problem and once the game finished the beer garden became extremely busy.

You can’t really go wrong musically with the 50s, 60s, Abba and Grease on a summers afternoon, and as we had a football crowd in I finished my show with Nessun Dorma.  Apparently Opera is very popular at The Kings Arms and I was given a 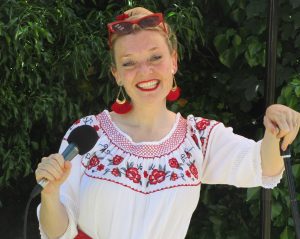 We’re All Going on a Summer Holiday!

standing ovation which was just lovely!

I shall leave you with a few photos as I think about enjoying my Summer Holiday rather than just singing about it as I finish my packing. I look forward to catching up with you when I get back.