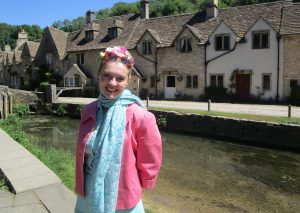 Out and About in Castle Combe, Chippenham!

I’m sorry I’m a little late with my blog this week, it had been my intention to share my holiday experiences with you on Tuesday but since coming back from Gloucestershire I’ve been slightly under the weather so my out put has been under par. I’m feeling better now but it’s put me behind even though I’ve still been working through and I’ve had much to catch up with. It’s not easy getting away as there is so much to keep on top of, and just when you think you’ve cleared your desk of work you get that all important e-mail you can’t put off which needs to be addressed immediately. 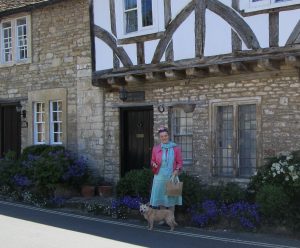 Poppy and I in Castle Combe!

Everything is so late this year due to the restrictions, where normally I would have the year sold by March. I’m doubling up on shows and cramming in paper work between performances. It’s such a treat to have a holiday even though Paul and I were away for only four days it was lovely to get away and have that quality time together. We decided to stay at The Toghill House Farm B&B in the village of Wick which is located just outside of Bath. We choose Toghill because it’s dog friendly and we wanted Poppy to enjoy her holiday too. Toghill didn’t disappoint and every morning Poppy was treated to a sausage 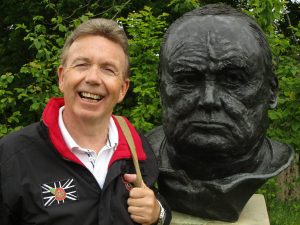 for breakfast which she absolutely loved and woofed down!

There’s plenty to see in the surrounding area and during our visit we went to the charming villages of Castle Combe, Lacock and Tetbury which are all pretty places of  historical interest and often used as filming locations in period dramas. We also had a wonderful day at Claverton Manor which is the American museum situated just outside of Bath. The museum is set in beautiful grounds which was great for Poppy. Paul made the most of the tea room while I went inside and visited the house. I especially enjoyed looking at 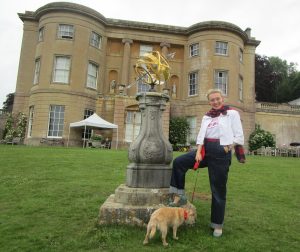 the patchwork textiles and room interiors which told the story of colonial America.

Despite only being away for a few days we had a lovely holiday until we visited “The Sign of the Angel” in Lacock for afternoon tea. It turned out to be a horrible experience and even now I can’t quite believe what happened to us.

Although we hadn’t booked a table we were told it would be 20 minutes before they could serve us due to the fact they were serving high tea to a coach party. Not a problem we said and I asked if I could have a latte while we were waiting as I felt my blood sugars starting to drop. As some of you 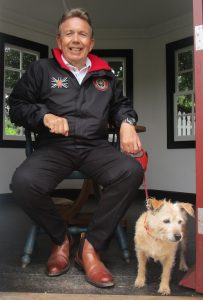 may know I’m a diabetic. I inject five to six times a day with insulin and I have to monitor my blood sugar very carefully. It was an extremely hot day and much quicker than expected my sugar levels started to plummet. Usually I carry supplies with me but on this occasion they had melted and I’d thrown them away earlier that day. I didn’t think this would be a problem as we were planning to have afternoon tea.

I asked the manager again if I could have a latte, and I stressed the importance of needing something sweet due to diabetes. The manager reiterated “As I’ve already explained to you I’m not prepared to serve you now” I stressed the importance of needing sugar quickly but he just walked away. Paul realizing how serious the situation was developing told me not to worry and he would get some sweets from the shop only to be confronted by the manager, Who asked him where he was going and said, only food bought on the premises could be consumed in the garden and if he returned to the hotel he would be refused entry and asked us 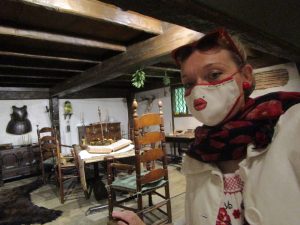 Inside the American Museum!

I then collapsed as I didn’t have enough strength to walk. Paul pleaded to members of the public for help and a packet of sweets was kindly donated by a gentlemen from the coach party. If it hadn’t been for that packet of sweet and a few minutes more I would have needed  an ambulance. Eventually a latte came but with-out sugar and as I ate the sweets I could see the manager and members of staff at the hotel laughing at us.

This was a distressing experience which shouldn’t 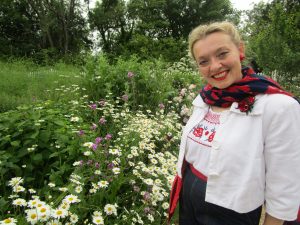 have happen. It doesn’t take much to lift a hypo but if untreated it can have serious consequences. It hard to believe that in this day and age a general manager of a hotel would behave so disgracefully and be lacking in basic compassion and awareness. Needless to say when I checked trip adviser Paul and I were not the only ones who have had issues with the manager at The Sign of the Angel!

I’m now getting very busy with the run up to Armed Forces day. It’s been 60s shows this week but come Saturday I’ve two shows back to back. I 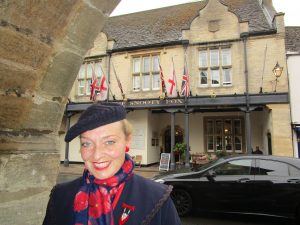 Out-side The Snooty Fox in Tetbury!

have a garden party in the afternoon and then in the evening I’m over to Tring to perform for a special Armed Forces Day event at the Nora Grace Hall.  On Sunday I’m performing for The Luton Festival of Transport and tomorrow I’m over to Oxford so I’ve much to do and to prepare for.

I shall leave my blog here tonight as I’ve just run out of time and I need to get to bed.

Keep Following and next time I shall tell you more about my plans to make a new dark and dangerous music video.

Toodle pip and bye for now!