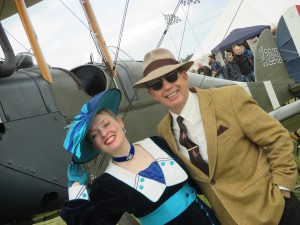 Paul and I Between Shows! 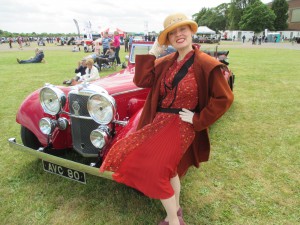 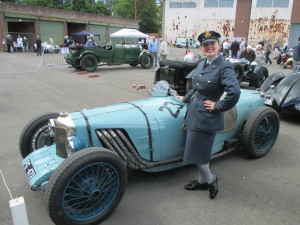 I Love this Car! 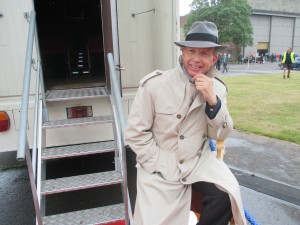 Paul as Paul Roebin by the Mobile Cinema!

This weekend Paul and I have had a wonderful time performing at the “Flywheel” event which took place in Bicester at Bicester Heritage airfield. It was the events first year and I have to say what a fabulous two days it turned out to be. All weekend we had non stop motor racing and flying displays from an array of motor vichels and aircraft dating back in time from 1908 to the 1960s. On Saturday we were a little concerned about the weather and later on that afternoon we did have something of a down poor which actually worked to my advantage. Every-one came into the Entertainments Marquee and I was able to conclude my final ATS show with Land of Hope and Glory. This went down really well with the audience as you can’t beat a good old fashion sing along with lots of flag waving to lift the spirits. By this time the marquee was starting to drip water and if you have seen some of Robert Etsell’s photos on my Facebook pages you will have already seen the drips on my ATS uniform. However all was well and just as I finished the sun came out and the air show was able to finnish with 9 bi planes flying in formation. I’m not sure but I think they were BE -2s which were the first purpose designed military aircraft but what ever they were they looked fantastic!

When ever I’m working at events I always find I have so little time to see the attractions and belive me there was so much to see and do at “Flywheeel”. I was very taken with the Vintage Mobile Cinema. Built in the 1960s to promote British industry it’s a stunning example of British transport and engineering. If you are looking for something different for your party then why not hire the cinema bus for your event. If you would like to find out more than do check out the Vintage Mobile Cinema web-site at www.vintagemobilecinema.co.uk

Paul and I felt just like film stars sitting in the directors chairs out-side the cinema and I only wish we had had more time to stay and see a film but I had three shows daily to deliver. This weekend I had the pleasure of working with two excellent bands 78 RPM on Saturday and Night Train on Sunday which is fronted by musician and brilliant musical arranger RichardWhennell who I’ve known for many years. Richard produces all my 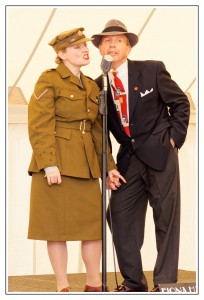 backing tracks so it was lovely to see him up on stage with his band as I normally see him in the studio. 78 RPM had a beautiful girl singer with them whose voice I enjoyed listening to very much. I really enjoyed her performance of “The Varsity Drag” which is one of those numbers which just sets your feet tapping. Writain in 1927 by George Olsen I’d not heard the number before but now it’s one I would love to add into my 1920s, 30s show.

Sunday was an extremely busy day at Flywheel as many people returned for a second day as they had enjoyed Saturday so much. The sun shone all day and I finished Sundays show with my 1940s WAAF show which seemed very appropriate. Paul sang too and is starting to have his own following fans. He has now taken the stage name of Paul Roebin although we still haven’t decided on the spelling. Thank-you to every-one who came along and supported us – it 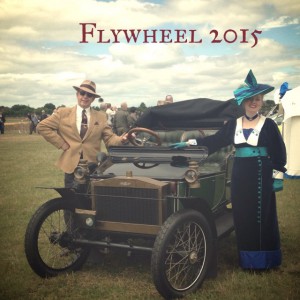 was so lovely to see you all! Congratulations to the organisers Richard Grafton and Stephen Slater  at Bicester Heritage who made this event such a success. Next week I shall be playing in Birmingham for Armed Forces Day so I hope you can all join us on Saturday. More on that later this week.