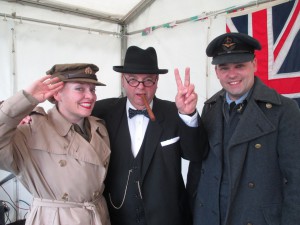 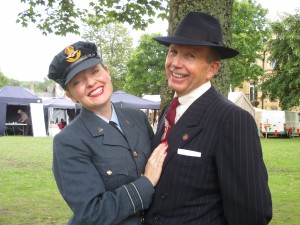 Paul and I Between Sets! 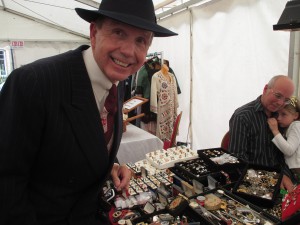 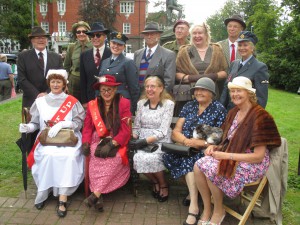 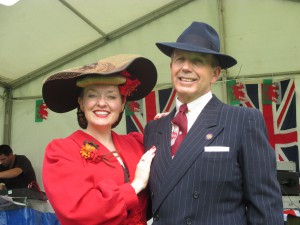 On stage with Paul! 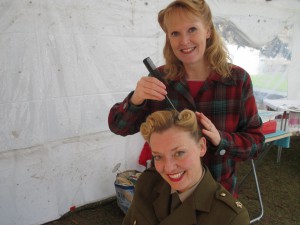 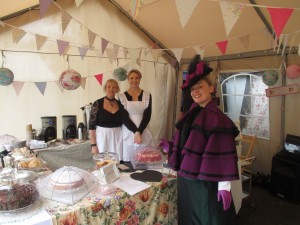 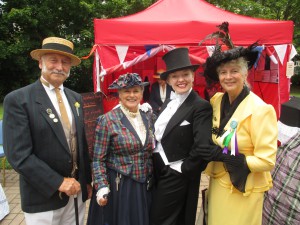 Lets All Go to the Music Hall! 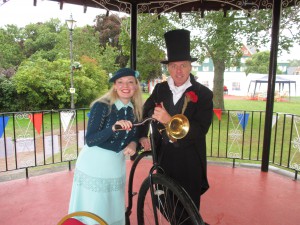 Me with Circus Entertainer Steve Kaos!

Hello every-one as you can see I’m back after enjoying 12 days away on tour. I have so much to share with you all about my time on the road that I’ve decided to split my blog into three parts this week.  If you’ve been following me you will know that this tour has taken me from Llandrindod Wells in Wales to Chester and onto Gretna Green in Scotland and back again. It’s required an amazing array of costumes as I’ve been covering a great variety of music and historical periods from Victorian, Edwardian and WW1 Music Hall to Opera, 1940s Swing to British Sing-along and just about everything else in the middle. I thought I had packed twelve suit carriers of costumes but in atchall fact I miscounted and it was fourteen carriers four hat boxes one wheelie case and two hold alls. Gosh what a lot of luggage!

It may not come as any surprise to learn that Paul wasn’t able to fit in my van for costumes so he decided to drive up and meet me in Llandrindod Wells in his own car which really worked out well. Llandrindod Wells is a funny place to get to from Bedfordshire as there is no real direct route and which ever way you go it’s a bit like the road to Tipperary. The Sat Nav seemed to enjoy taking me a completely different route to the one I’d carefully planned although I did get there in the end even though it took me four hours! I remember last year it was a bit wet and once again we were blessed with rain. Paul and I had been booked into the Portland House Hotel which is right in the centre of town. I can’t tell you how relived I was to reach the hotel as it was a very long and difficult journey. The Portland Hotel was once a bank built during the reign of Queen Victoria and has lovely large Victorian rooms. The only down side was my room was right up on the fourth floor and with no lift it involved a great deal of carriering. Fortunately our hostess Ruth very kindly allowed me to leave my costume in the laundry room on the third floor which helped greatly.

I had been engaged to perform 3 x 45 minute shows daily by the Llandrindod Wells Festival committee covering both 1940s and Victorian music. On this occasion the nine-day festival had been split into three with the opening weekend featuring the 1940s, Victorian from Monday to Friday and a Steam Punk event on the  closing bank holiday weekend. I was booked for three days and I featured a real variety of music and costumes. The event was opened by Winston Churchill Impersonator Derek Herbert who did a fantastic job. Derek or should I say Mr Churchill was extremely entertaining as he hosted the Miss Victory competition and Best Dressed 40s Allied Forces Man. On Saturday night the Metropole Hotel hosted a 1940s dance with the Hereford Big Band which was just wonderful and packed. Paul and I danced the night away and they had special guest Pete Wayre who performed during the bands comfort break. I joined forces with Pete on Sunday only the weather turned really nasty and we had to re locate from the Temple Gardens to the Glen Ask Hotel. It was such a shame as so much work had gone into the events which in some cases had to be cancelled due to bad weather. However come the evening Paul and I were at The Commodore Hotel performing with DJ and Dance experts “GI Jive”. This was Paul’s first build engagement and he went down really well not only with the audience but with the organisers as well. Performing is second nature to me so it’s unusually for me to feel nervous before I sing. I didn’t realise just how nervous Paul was but he coped with his nerves very well and left the audiences cheering. Llandrindod Wells has a wonderful community of people who support the festival every year. Thank-you every-one for your support and for making Paul feel so welcome on stage. With it being such a special night I even splashed out and had my hair done by Karen Beddington of KDB Vintage hairstylist. Check out her page at www.kazwatkins.wix.com/kdbvintagehair-1

By Monday Llandrindod Wells was still a little wet only this time I had changed costume yet again and gone back to Victorian Music Hall. Performing in my purple cape, top hat and tails and finishing off with a Pearly Queen set in Temple Gardens. On Tuesday just before leaving the festival Paul and I bumped into circus entertainer Steve Kaos on his penny farthing while enjoying a spot of lunch in the tea tent.

Next time I shall be writing about our next stage of the tour and Willington Hall.