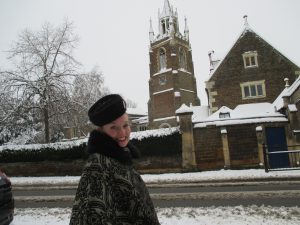 Hello every-one as you can see I’m back at my desk burning the midnight oil once more. I’ve been in creditably busy since I last wrote my blog having had all sorts of adventures. It’s been a little like that song “One wheel on my wagon, and I’m still

rolling along!” It must just be the general panic of Christmas I think as I feel terribly behind this year. I’ve not even started on writing my Christmas cards as I’ve had an endless stream of annoying little niggly jobs to do which have been slowing me down somewhat. Silly things, that no 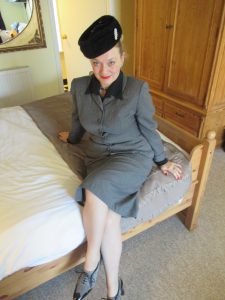 sooner than I sort one problem and another niggly little job pops up. I feel like I’m constantly  fighting to stay on top with not enough time to compleate my jobs.

However despite not having enough hours in the day I have made some positive leaps forward. My video library is growing nicely and I now have 45 videos and showreels documenting my work from Opera to Rock and Roll. More videos are on there way and I currently have in production “La Marseillaise” and “Requiem for a Soldier”. Iain my web-designer has been working with me on a new Italian page for my web-site as I want to appeal more to the international market and expand further into Europe. This might seem a bit bonkers with the Brexit issue at the moment but I’m finding the UK vintage scene horribly stale where the world is a much more exciting prospect. There is still plenty of work to be done on my 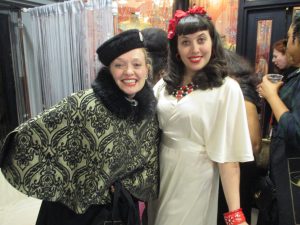 Rachel & I at What Katie Did!

international pages as it’s taken us a while to find a good Italian translation. My French D-Day page also needed to be re worked as some of the French via Google wasn’t quite the ticket so we have put that right too which will be a great improvement.

This week I’ve been busy performing my “Rocking Around the Christmas Tree” show dashing from place to place. I’ve had a few disasters like amps, leads and speakers failing only to find the problems haven’t really been problems at all and it’s just been a case of me knocking a switch I didn’t see or not pushing a lead in quite enough. 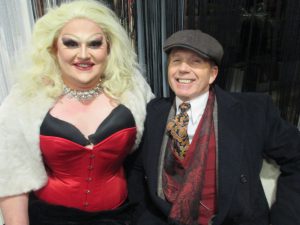 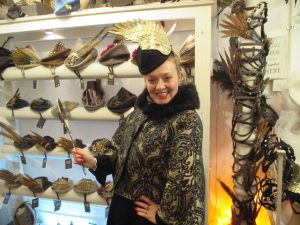 You know what they say “More haste less speed” and when one is busy and in a dash it’s easy to make silly mistakes – but all’s well that ends well!

On Friday I joined Paul after my show for a weekend away in Woburn. By a twist of fate I had Saturday clear and I had been sent tickets to attend the “What Katie Did” Christmas Soiree in Portobello Road. If you follow my blogs you will know I was there only a few weeks ago when my friend Lynda and I had a day in London. “What Katie Did” do is specialize in faux vintage style lingerie and as I was in need of a few extra pieces to add to my collection it was a wonderful opportunity to attend.

Saturday was jolly cold as both Paul and I wrapped up warm and headed into London from Woburn. There is always lots to see in Portobello Road and while Paul and I were in town we  had the pleasure of meeting Sara Tiara who makes the most wonderful hats. Potobello Road is full of interesting and creative people and Sara’s hat are just a dream. Here is a link to her web-site and I had such fun trying on a couple of her beautiful creations – so very me!  http://www.saratiara.com 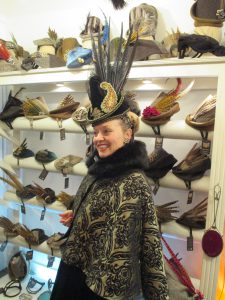 On Sunday I was due to head straight off after breakfast to Abingdon as I was booked to be on stage for 2pm. However Paul and I woke to find Woburn covered in a blanket of snow with the roads completely blocked. Only one member of staff was on in our hotel and after being turned back Paul and I decided to stay another night in Woburn. It turned out to be the right thing to do as we later found out the roads to Aylesbury had been closed along with the A34 so neither Paul and I would have made our destinations.

By Monday much of the snow had cleared as I had two shows back to back in Berkhamstead and Bourne End. Today I’ve been in Bigglewade and tomorrow I shall be in Leighton Buzzard before I have to make it over to Abingdon again on Thursday. Now the snow has cleared all should be OK but at this time of year you can never be too sure so it’s important to travel prepared. 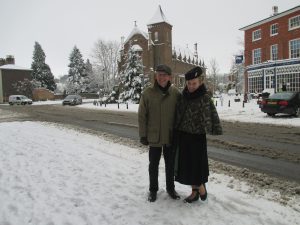 Paul and I in Woburn!

That’s my news as I keep trucking on through the Christmas season. Keep Following and Toodle Pip!