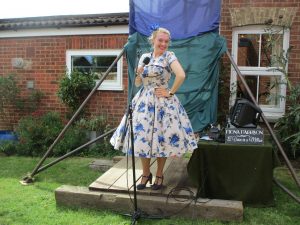 On Stage at Ashwell Street! 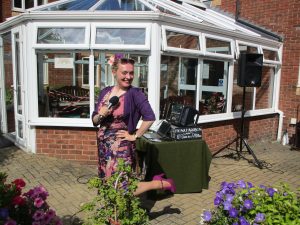 The Magic of the Musicals at Laburnum Court!

It’s been a full action packed week combining my original scheduled shows with Driveway Concerts. It’s encouraging to see life getting back to a new kind of normal with clients starting to feel confident to book future shows again. It’s been an extraordinary time but on the plus side my Driveway Concerts have made me visible to a whole new client base which in turn has brought new business. 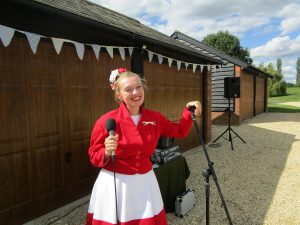 Last Friday I had the pleasure of performing the “Magic of the Musicals” at Laburnum Court and then on Saturday I had two back-to-back Driveway Concerts in Ashwell Street and Fyne Drive. On Sunday I made my way over to Rowden Farm Barns in Mentmore, where we couldn’t have wished for better weather. All of my shows have been extremely well received and it’s fantastic to see communities coming together and getting united through music. For my Ashwell Show the community built me a stage which was wonderful.

Today I had a show in Royston and yesterday I had an appointment at the Wycombe Museum. The Museum is set in lovely grounds and is just down the road from Hughenden Manor right in the heart of High Wycombe. Although the museum is still closed to visitors the grounds are open and I shall be performing an outdoor concert there in September with “The Magic of the Musicals”, which I’m looking forward to very much.

Shuttleworth has also opened up again for air shows where people can watch from their cars, although I believe the museum is still closed to visitors. I’m still waiting to hear if the museum will be open for the Vintage Air Show on the 6th September which is when I’ve been booked to sing. Things are also looking very encouraging 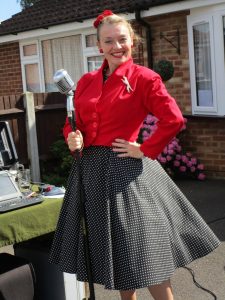 All Set to Rock and Roll!

for August with Stonehurst Farm in Mountsorrel wishing to go ahead with their 1940s event. With the social distancing laws, numbers will be greatly reduced and it will be a pre-booked ticketed event, so a little different from before. I’ve learnt from experience to take one day at a time as anything could happen between now and then, but Paul and I are keeping everything crossed as we have some terrific shows planned.

In the meantime I’ve been thinking a lot about music and all the arrangements I want to get into production. The world keeps turning and despite the lockdown it’s important to stay on top of things. The other day I managed to find online an original copy of the Vera Lynn song “Be like the Kettle and Sing”. I’ve been wanting to perform this number for years but until now I’ve not been able to get hold of the sheet music. 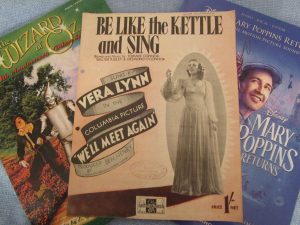 This song is very British and was written by Tommie Connor, Walter Ridley and Desmond O’Connor. You could say it’s very similar in style to Noel Gay’s “Me and My Girl”. The song is bright and carefree which perhaps is just what we all need during this strange time.