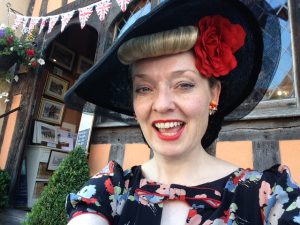 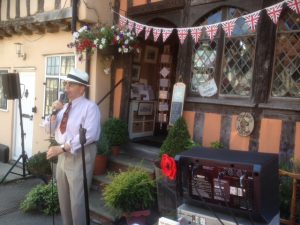 I’m sorry to say I’m going to have to start my blog tonight with an apology. Paul and I have just come back from a full action packed weekend which started off at the Town Hall in Colchester only to find I had left my camera behind in my other hand bag. Drat! So as you might expect I’m a little short of photos this time around. We were able to take a few on our mobile phones but for some unexplained technical reason Paul hasn’t been able to e-mail his photos across to me. Who knows where in cyber space they have ended up but they never made it to my in box. I just have a few shots from Sunday’s show in Lavenham so I’m afraid you will have to rely on my words rather than pictures for this installment.

On Friday Paul and I set off in the heat to Colchester and as you might expect the journey was horrendous. We were both delayed in traffic on the M25 and A12 and neither of us arrived before 5pm. We had been booked to perform for a 1940s Wedding at Colchester town hall on Saturday from 1pm though to 10pm which involved a varied program from Paul and myself. I had been booked to sing during the service as the bride had requested three songs two of which I had commissioned especially for the occasion “Long ago and Far Away” and “I’ll be with you in Apple Blossom Time” which the bride wanted to walk down the isle to. Once again Richard had done me proud with the musical arrangements and then after the service it was all change from the Grand Jury room to Moot Hall for the reception. 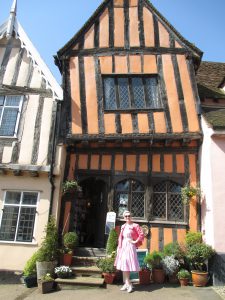 We had been engaged to perform 3 x 60 minute sets over the course of the afternoon and evening while our friend Dave Dawes played wonderful songs from the 1940s in-between our musical sets. I’m sorry I don’t have any photos to show you of just how beautiful Colchester Town Hall is as its a Victorian architectural delight.  Moot Hall has no shortage of splendor with it’s Corinthian columns and behind where we performed on the stage was the most fantastic pipe organ.

My first set had a cabaret feel as I include some well loved wartime sing along gems from the 1940s which took us up to tea. Then once every-one had had tea I performed a dance work shop and got every-one to join in with the “Lambeth Walk” and “The Palais Glide”, which despite the hot weather went down very well along with the Hokey Cokey. For our final set Paul and I performed the best of the Big Band and Swing finishing with “The White Cliffs of Dover” and “We’ll Meet Again” before handing over to Dave who played through to the end.

Our Sunday was just as busy as we shot up the road to Lavenham to play at Munnings Tearoom, The Crooked House which is one of the oldest,  if not the oldest house in Lavenham dating back to 1395. I think Sunday must have been one of the hottest days of the year because Lavenham was very quite. Paul and I sang through from 1pm – 5pm and afterwards we went for dinner with our hostess across the road to the Greyhound Pub.

Next weekend I shall be in Chippenham Wiltshire performing for the WOs and Sargent’s Mess Summer Ball music from WW1. Today and for the rest of this week I shall be out and about performing 4th July “Stars and Stripes” shows but don’t forget on the 15th July I will be up in Yorkshire. You will be able to catch me on stage at 11am and 3.15pm in Pickering performing for the towns 1960 weekend. More news on that to follow soon so keep Following

Toodle Pip and Bye for now! 😉