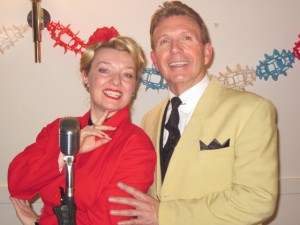 On Stage with Paul at Nightingale House! 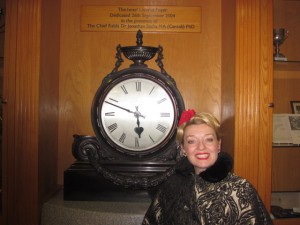 By the Great Clock at Nightingale House! 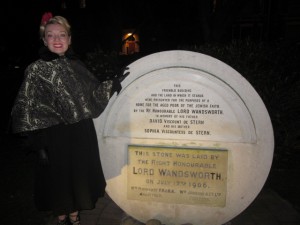 Hello every-one as you might imagine I’ve had a very busy Christmas season so far having Sleigh Riden, Misletoed and Wined and rocked my way around far too many Christmas trees to mention. On Sunday I was invited to sing as part of the Jewish Festival of Lights in London at Nightingale House otherwise known as “Chanukah”. It was my first visit to Nightingale House and I was engaged to perform my Big Band and Swing Show “Don’t Sit Under the Apple Tree”. A great choice! – This show has so many of my favourite tunes in it but I went with my instinct and brought in quite a bit of Hollywood too. I’m such a fan of Irving Berlin and Rodgers and Hammerstin and I  just knew my audience would be too! Paul accompanied me on stage as my special guest and sang 3 Sinatra numbers “I’ve got you Under my Skin”, “Fly Me to the Moon” and “Witchcraft”.  Paul’s act is really starting to take shape and I have been helping him with his breathing and singing tecniks. He was a real hit on Sunday particularly as he sounds like Frank Sinatra and looks a bit like the movie star James Caan. Paul is planning to record his first album next year – so  watch this space!

After the show the Rabbi lit the candles and sang a prayer for “Chanukah”. In case you don’t know Chanukah or Hanukkah is also known as the Festival of Lights, feast of Dedication. It’s an 8 day Jewish holiday commemorating the rededication of the Holy Temple in Jerusalem at the time of the Maccabean Revolt against the Seleucid Empire of the 2nd century BCE. Although I specialize in historical periods I’m afraid my musical repertoire doesn’t go back as far as the 2nd century not that any manuscripts are in existence from which I could have draw reference from anyway. I’m pleased to say that on this occasion performing 1940s 50s and 60s swing seem to go down very well with the audience and hit just the right note, although it has left me curious about what music might have sounded like back in the days of the Seleucid Empire.

One of the things I love about my job is I get to meet so  many interesting people and go to so many wonderful places.  Nightingale House has a fascinating history and dates back to 1904 when the land and building was presented as a home for retired members of the Jewish Faith by Lord Wandsworth in memory of his father and mother. Today it is part of the Nightingale Hammerson Group and I was recommended to perform there after making friends with Joy who I met at Hammersmith’s Vintage Fashion Fair. So thank-you Joy for recomending me. Nightingale House is right in the heart of London nere Clapham South Tube Station and I have to confess from Leighton Buzzard it’s quite a journey. On this occation Paul very kindly drove for me as we went round the M25 to Junction 7 and then straight up the A 23 into London. We set off at 11am and arrived at 1.45pm due to traffic , but I’m pleased to say it was much  quicker on the way home!

Now I’m back in Bedfordshire it’s two shows daily right through to Christmas although saying that most of my local work is in Buckinghamshire. Tomorrow I’m in Aylesbury and Wing so must get to bed. Thanks for following and Toodle pip!