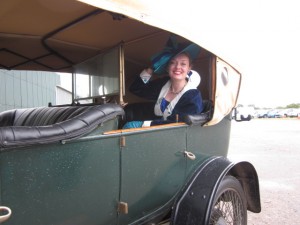 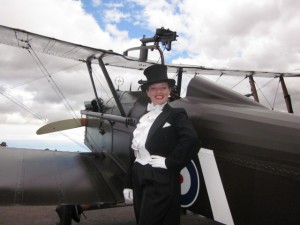 Burlington Bertie and the BE2 Aircraft! 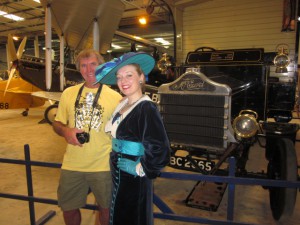 Meeting up with Brian at Shuttleworth! 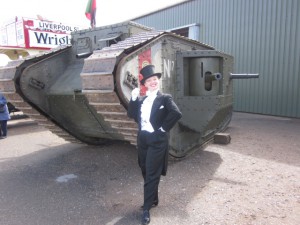 Me with the Mark IV Tank! 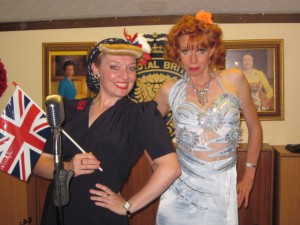 On stage with Lynda at the RBL in Chingford!

I’m so sorry I wasn’t able to do a blog last Friday in prep for this weekend just gone but for those of you who have been following me will know I’ve been ever-so busy. In fact it will continue to be so right through August and to the end of the year so even now I’m in a bit of a dash to make sure I keep you all up to date with my latest news. This Saturday I had the pleasure of working with my friend singer and ukulele entertainer Lynda Styan at the Royal British Legion in Chingford, London. We were engaged to perform for a special 1940s Bliz Party night so between us we sung and played our way through a wonderful selection of songs from the 1920s, 30s and 40s. What I like about Lynda’s act is she is very knowledgable about her music and the songs she is performing – I find her patter very engaging and informative. Needless to say by the end of the night we had every-one up singing and flag waving and I think we can say a jolly good time was had by all!

On Sunday I was engaged to perform at the Shuttleworth collection for their special WW1 Commemoration Air Show. As I’m sure so many of you must have experienced we were hit by bad weather so none of the aircraft were able to fly. There should have been flying a replica of a DH2 and BE2c other wise known as the Biggles Biplane but due to the bad weather everything was grounded. However the BE2c and I are already well acquainted as I was lucky enough to have been photographed with it back in 2011 when I did a photo shoot with Dave Jackson of Retoair Photographic. On this occasion however I was photographed with the BE2 which during WW1 was the main workhorse of the Royal Flying Corps. I also bumped into a Mark 1v tank and a 1914 B2737 LGOC B-type bus which was on lone from the London Transport Museum. I was also photographed in the 1912 Crossley Staff car which was used in WW1 by the Royal Flying Corps. To see my photos do click onto my facebook star at the top of this page and you will be able to see me out and about at Shuttleworth. While I was there I performed two 60 minute shows daily one in my smart WW1 dress and the other in my Burlington Bertie costume. I do like that song – that’s the wonderful thing about Music Hall it wasn’t that uncommon for woman to dress up as men and it can be a relife not having to wear a tight corset. I also mixed in some opera which went down well and I finished the day with Nesum Dorma. Despite the bad weather it’s always lovely to to see friends and I was very touched that my friends Brian and Viv from Mansfield came down to see me and Paul who came all the way up from Portsmouth.

This weekend I will be back on the road again as I head up to Scotland and to the Town Hall in Falkirk. I’ve been engaged to sing for Falkirk’s WW1 commemorations and I’m looking forward to returning to the theatre very much. I first played at the Town Hall back in 2001/02 when I was touring in “We’ll Meet Again” and “How Hovis Won the War” so it will be just like old times. From Scotland I’m then cutting back home through Wales and stopping off in Llandrindod Wells. I’ve been booked to sing for the towns Victorian Festival so it’s going to be a very busy week. In the mean time I’m a bit worried about Connie my van. She has been suffering from a diagnostic problem and this weekend I have been having to use my brothers van. I hope to get her back tomorrow as we have a lot of miles to cover this week.

That’s all my news for now – Keep Watching and Toodle Pip!