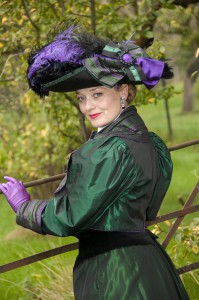 Me all Set for Llandrindod Wells &  The Victorian Festival!

As ever I’m in a bit of a dash making sure I have everything prepped for this weekend. I’m thrilled to say I was able to pick Connie up this afternoon. She has been in the garage on and off since Thursday and as you might imagine all sorts needed doing. She was loosing power so I had a full diagnostic test done which resulted in removing and testing the fuel injectors, a new mass air flow meter, a new starter motor, not to mention a fuel filter and fuel additive. Connie is now like a new van and all ready for Scotland. I also made sure she had a new set of tyres the other day as we do do some mileage and have become great chums as a result.

This Saturday I have been engaged to sing in Falkirk at the Town Hall which is a lovely theatre I first played back in 2001/2002 when I toured in “We’ll Meet Again” and “How Hovis Won the War”. On this occasion I have been booked to sing for the towns WW1 Centinary and I’m looking forward to meeting up and working with people I’ve not seen for many years. On Sunday I will be heading down into Wales for the Victorian Festival staged every year in the town of Llandrindod Wells. It’s the first time I’ve been to Llandrindod Well and I’m looking forward to sing there very much. The Welsh are very appreciative of good singers and I’ve put together a great program of music from Music Hall to Opera which I’m sure all the visitors will enjoy. I’ve been booked to perform 3 shows daily  on the Monday and Tuesday and on Monday evening I’ve been asked to open at the towns Theatre so it’s going to be a very busy 5 days away. On Friday I have 2 x WW1 shows to do on my way up to Scotland in Winsford and Wilmslow in Cheshire which will be where I’m breaking my journey before heading up to Falkirk. No sooner do I get back then I hit the ground running with shows every day next week so this really is a very busy time.

With the centenary there has been great demand for my services and the Music of Music Hall. I have been enjoying singing this music very much as it makes a pleasant change from the 1940s although saying that many of the popular tunes from  WW2 have their origins in Music Hall . Next month I will be performing at Chatham’s “Salute to the 40s” and I have been working on some new ideas behind the scenes. But more on that later for now I must work on my show plans and pack up my gowns for the weekend.