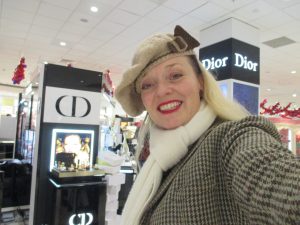 Getting All Wrapped Up for Christmas! 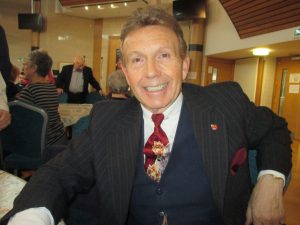 Paul Before the Show at Mill Hill Synagogue!

I can’t believe just how far I have fallen behind with my blog this week but like the title suggests it really is beginning to look a lot like Christmas and even now I’m dashing to get my blog out between festive shows. I started the first of my Christmas shows yesterday and I’ve been rehearsing this week to make sure all was right in my head word wise before I stepped out with my first Christmas show on Friday.

This year I have a few new numbers including the tittle song “It’s beginning to look a lot like Christmas” ( another brilliant Richard arrangement) and “Santa Baby” which we have lifted a key. I think I mentioned in my last blog next year I will be launching a new Christmas show “A Fairy Tale Spectacular”. I can’t wait to get to work with Richard on the new musical arrangements in the Spring as we start to prepare for Christmas/New Year 2019/2020.

Speaking of New Year I’m currently learning Abba’s “Happy New Year” and “The Perfect Year” from “Sunset Boulevard” which will make great additions to my New Year’s show. This week I’ve launched two new videos, A Rock and Roll showreel and a 1940s Swing take on the traditional Scottish song “Loch Lomond”. So if you get the chance do click my You Tube button at the top of this page and take a look. I was keen to have something Scottish for New Year and Burns Night so I’m very pleased with the way “Loch Lomond” has turned out.

My mother and I have been watching “Outlander” on DVD which is set in 18 century Scotland. The whole concept of being able to travel through time has always fascinated me. The story begins in the 1940s then we go back to the 18 century (two of my favorite historical periods) and then 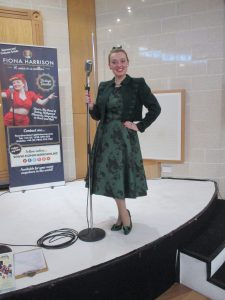 On Stage at Mill Hill!

we move on into the 1960s and back to the 18th century again. It’s a good yarn and I’ve found some of the costumes very inspiring. Needless to say I’m into everything Scottish at the moment and next August Paul and I will be heading up to Edinburgh for the Military Tattoo. So can’t wait and I’m already thinking about designing a new dress with an 18th century come Scottish feel!

This week I’ve been busy trying to tie up all those loose ends before Christmas only I still have a mountain of paper work to get through. Last weekend I was able to go to Milton Keynes and get all my Christmas Shopping done and this weekend I must finish my wrapping and make a start on all my Christmas Cards. It’s difficult trying to fit it all in between shows especially after such a busy November. 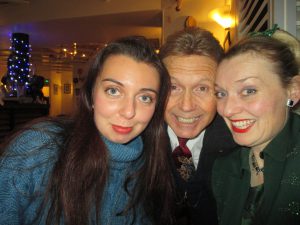 Paul and I with Miss Paramount!

we had the pleasure of meeting up with our French friend and fellow singer Miss Paramount in Covent Garden at La Ballerina. A charming Italian restaurant in Bow street. It was good to be in London again and to visit the Royal Opera House and to see all the Christmas decorations. On Saturday I drove over to the Cots Wolds and performed for a private party in Moreton in the Marsh a “We’ll Meet Again” show which was my last uniform show of the season.

This week I invited my friend and French horn player Barry Castle to join me at the cinema to see the MGM classic “Singing in the Rain”. It’s true 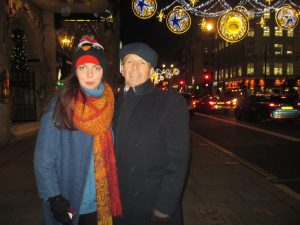 what they say they really don’t make films like that any more. Singing in the Rain is my favorite musical and it was wonderful to see this fabulous Technicolor film on the big screen. I was able to really study the costumes this time around in detail and see so much more. After all who could forget those wonderful dance sequences with Gene Kelly, Debbie Reynolds and Donald O’ Connor!

I was really pleased Barry was able to join me as he use to play french horn at the Royal Opera House in Covent Garden. Having just been there a few days before it was good to catch up with all the news. 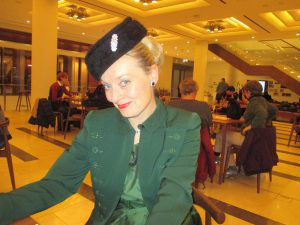 Tea at The Royal Opera House!

Gosh just noticed the time and I really must dash. It’s now Christmas shows all the way through to the New Year. Keep Following and Toodle Pip! 😉 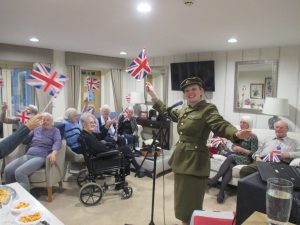 “We’ll Meet Again at Moreton in the Marsh!