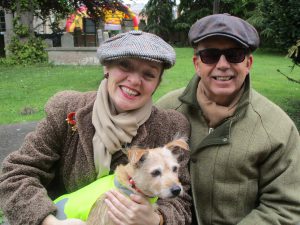 Out on May Day with Poppy!

It’s been a particularly hard week this week what with V.E. Day and all as I’ve had much to sort out which is why I’m later with my blog this week. So sorry every-one for the delay which is why I’m working hard to catch up this weekend with my paperwork. Last weekend I had two lovely days off to tie in with the bank holiday and now I’m playing catch-up.

Paul came up to visit with Poppy and we spent our days walking down the canal tow path seeing the local sights. We even made it along to the Monday May Day Fair in Leighton Buzzard. It made a sweet change to have some time together with-out having to worry about music, getting dressed up and driving off to do a show. 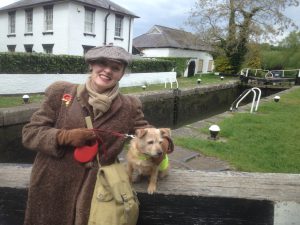 Time is racing on and since we’ve returned from Italy it’s been full steam ahead with Normandy. This week has all been about V.E. Day which you could say has been a good start to me thinking about my show plans for France.

I spent Wednesday’s V.E. Day performing at The Cross Keys in Pulloxhill for a special V.E. tea arranged by the Flittabus Community Transport Company. I’ve never been to Pulloxhill before and the Cross Keys has a fantastic marque facility where they often host events. It was a wonderful afternoon as the audience waved flags and joined in with all my songs from the 1940s and perhaps 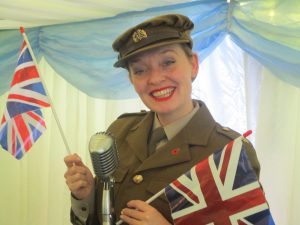 On Stage at The Cross Keys!

not surprisingly we finished the show with “We’ll Meet Again”.

In between this weeks “We’ll Meet Again” performances I’ve been able to tie up most of my French show dates and this is my itinerary so far. Paul and I hope you will be able to make it a long to a few of our  performances in France as I always try and make each show slightly different. 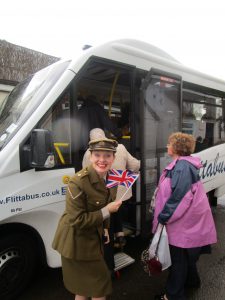 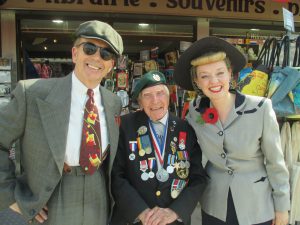 In Arromanches with D-Day Veteran Harry!

It’s a huge honor to be invited to perform for the D-Day Breakfast on Arromanches beach on the 6th June as we will be surrounded by 250 military vehicles as we all remember that very special 75th D-Day moment. Paul and I will also be at Pegasus Bridge on the 5th and 7th which we are really looking forward to as we will be leading the 7th June Parade. 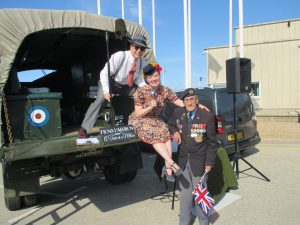 On Stage with Veteran Len Cox in Arromanches!

MOD Supported Events in the Arromanches Sector:
6 June 0726 (local time) Lone Piper on the Mulberry harbour:
At Arromanches, the Army will mark the exact moment the first British soldier landed on Gold beach with a lone piper playing from the famous Mulberry Harbour Element 449.
With some 250+ British Military Vehicles assembled on the beach in tribute, this special coming-together will include one of the largest gatherings of the iconic DUKW amphibious trucks seen on the beach since 1944, so closely associated with the essential logistic operations of the Port Winston artificial Harbour.
BBC News, BBC Scotland, ITV Meridian, Granada & ITN, Sky, Ch4 National and other Regional TV and Radio Breakfast coverage, followed by Liberation Music by Fiona Harrison and Paul Marsden up to 0915.
6 June AM The D-Day memorial inaugurated: The Normandy Memorial Trust’s statue will be unveiled at Ver-Sur-Mer, Normandy in the presence of senior leaders, military musicians and personnel.
6 June 1000 (local time) Bayeux: In this first town liberated by the allied forces The Royal British Legion will hold events commencing with a service at Bayeux Cathedral and a cemetery service at Commonwealth War Graves Commission Bayeux where they will be supported with a tri-service Guard of Honour and military musicians.
6 June 15.00 hrs (local time) Arromanches:
The ever popular and emotional Arromanches British Veterans Commemoration Ceremony, conducted by NVA National Padre Major Mandy Reynolds, herself the daughter of a Normandy Veteran.
With music from the Somme Battlefield Pipe Band, the Jedburgh Pipe Band, the wonderful Orange Band of Liberation, plus the Choristers of Hereford Cathedral Choir, at the end of the traditional commemoration, we will be joined at 16.00 by Veterans coming from the events in Bayeux escorted by Army personnel, for a concert of Music by the Central band of the RAF, interspersed with a flypast by the Red Arrows, and the Battle of Britain Memorial Flight….and maybe a few other surprises dropping in as well.
This will be a very International event for this very special year, with Military Attachés representing all the D-Day allied Nations present to share the emotion and to honour the day’s VIP’s – The Veterans. 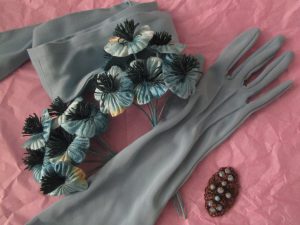 A little closer to home I’ve been putting together my out-fits for the tour and experimenting with some vintage quirky colour combinations. I’m having a couple of my dresses remodeled for France. This last week I’ve been able to pick up a few vintage accessories on Etsy which unlike ebay specializes in Vintage items and hand made crafted goods. I was really thrilled to find some turquoise vintage velvet flowers and a brooch which I will be using to accessories one of my out-fits and some other bits and pieces which are adding those finishing touches to my ensembles.

I’m also thrilled to announce my new My Fair Lady page is now up and running on my web-site which you can find by clicking the link. I also film the showreel on the 27th of this month so much to do  https://www.fionaharrison.biz/my-fair-lady/

Tomorrow I’m singing for a private birthday party and then on the 18th May Paul and I will be in Norwich performing for the RAF 100 Group Reunion.