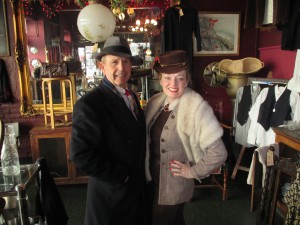 Paul and I Shopping at Rhubarb! 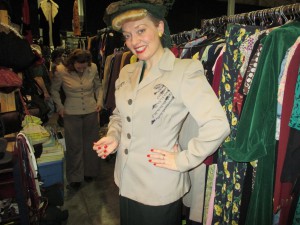 Trying on Vintage Clothes at Militaria! 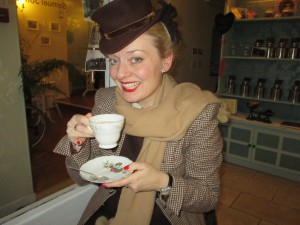 This weekend I have been out and about in the Coventry area staying in Leamington Spa and yes it is Leamington Spa and not Lemmington Spar as I so badly spelt in my last blog. Oups – spar as in rigging rather than bath, what ever next! Spelling has always been my down fall, what a shame I’m not really Prudie Jones as she spells so well! Despite my foe par Paul and I decided to spend Saturday in town shopping as Leamington has so many wonderful shops and I love to discover new and interesting places. We came across a great shop by chance called Rhubarb which sold all sorts of antiques and vintage clothes which I just had to try on of course and I was able to pick up a 1920s style dress in Phase Eight which I know will be perfect for my “Putting on the Ritz” shows. It’s called the Gatsby and for once it’s wonderful to find a 1920s dress which is cut right for my figura. I’m really a bit too curvy for 20s fashions but this one is cut just right and it is covered in beautiful silver beads – perfect and so lovely to dance in too! Swish, swish!

On Sunday Paul and I made our way over to the Stoneleigh Militaria show which is always interesting. It’s a great place to catch up with friends and once again I was ever-so tempted by the lovely vintage clothes I saw on display – however I was good! I’m really rather over run with clothes, I can’t bear to throw anything away as they are all like old friends!

I have a a real mix bag of shows to do this week from “Hooray to Hollywood” to “Well Meet Again” but on Tuesday 24th Feb I will be singing for Oxjam at All Saints Church in Leighton Buzzard so keep Watching and I will keep you posted. That’s all my news for now!