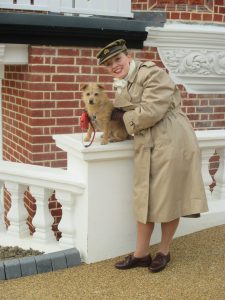 Walking Poppy Between Shows in Southsea!

If you caught my last blog you will know this past week I have been performing down in the Fleet, Portsmouth area an assortment of shows combining the music of the 1940s with the Swinging 50s and 60s. It’s always good to get away and work a different area from time to time. These last few months I’ve been busy in the office  and I’m looking forward to performing the first of my Easter Bonnet shows this coming Friday with the run up to the Easter season.

It will be good to get away from my computer screen. There is still a lot of uncertainty in the air with Brexit and all but things are starting to come together or be it very last minute. Where a few years ago events were booked up 12 months in advance many are waiting to a few months before the scheduled event before committing, and quite a few have now fallen by the wayside which doesn’t surprise me at all. 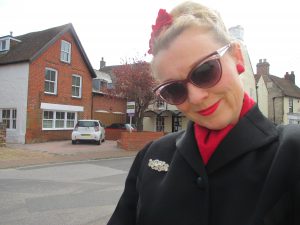 Out and About in Emsworth!

I expect many of you on the 1940s scene have already picked up your “Best of British” magazine this month from WH Smiths. For those of you in the know the BOB April issue is the one to have as it lists all the 1940s events for the year. It’s a good way of mapping the changes. You can tell a lot by looking at  how events advertiser themselves and how they vary from year to year. It’s much more informative than reading a list on a web-site as you can judge which events are thriving and which ones are going down. When things get tight the first thing events cut is their advertising budget and entertainment which 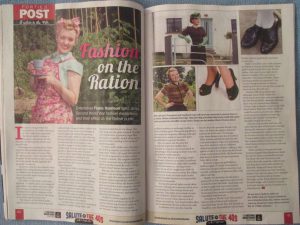 My Fashion on the Ration Article!

doesn’t present a good image.  Often more is said by not having an advert which can be followed up by social media or in some cases the lack of it. You can always tell just how successful an event has been by it’s social media follow up. The results can be quite surprising so it never pays to underestimate the public!

This month you can find my advertisement on page 61 in the Best of British plus my article on page 40. This year I was asked to write about “Fashion on the Ration” and it’s effects on the British public. I really enjoyed writing this article so if you haven’t got your magazine 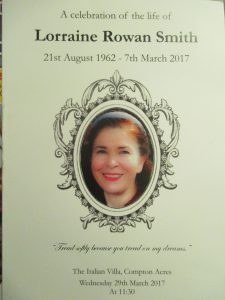 yet do make sure you pop down to WH Smiths and pick up a copy. The BOB makes for a great read!

While I was performing down in Portsmouth last week I was very sorry to hear of the death of fellow artist Lorraine Rowan Smith. Like many artists we performed at similar events and we were a little like ships which passed in the night. Sadly I wished fate had brought us together as we had so much in common. I didn’t realize just how much until I heard her daughter Emma speak at Lorraine’s funeral last Wednesday which took place at The Italian Villa at Compton Acres. Paul knew Lorraine far better than I and I only wished we had had the opportunity to have got to known each other. I think we would have had so much to have talked about having trod a very similar path. 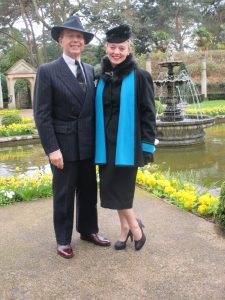 Paul and I at The Italian Villa!

performances. I’m so pleased that so many of her performances had been recorded in particular her singing “You’ll Never Walk Alone” from Carousel. However to my mind her finest tribute was a film chosen by Emma which showed Lorraine at her very best singing “The Jewel Song” from Faust in perfect French. I’ve sung that aria and I know just how difficult it is to do which I think highlighted how talented she really was.

Wednesday’s service was a wonderful and fitting tribute to a very fine lady who cared a great deal about so many things. I was particularly moved when Emma told us that every Friday Lorraine would wear something red to remember the people who died in both world wars as once a year on the 11th November wasn’t enough. Afterwards we were invited to walk around the gardens of the Italian Villa which was just beautiful.

I shall leave my blog here tonight. Keep Watching and Toodle Pip!