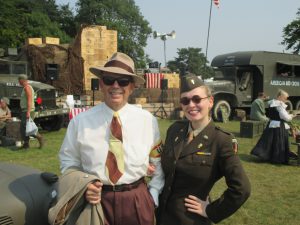 Paul and I Out and About at Odyssey 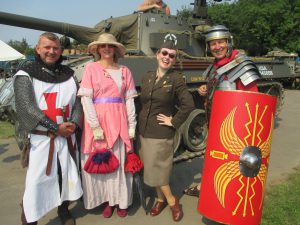 You Meet All Sorts at Odyssey! 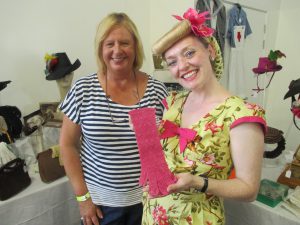 Me Shopping for Vintage at “Jenspick”

As you might expect I have a very busy week ahead of me what with one thing  and another. I have a quick turn around as I need to get myself ready for this coming weekend and The Victory Show. Paul and I returned home yesterday after playing two days at the Military Odyssey show for the 514th. I had been engaged to perform 2 x 45 minute shows daily American songs from the 1940s which attracted a lot of people to the stand and as Paul is the 514th’s Coronel he was able to dazzle the company with his singing which went down really well with the audience.

I drove down on Friday night after my afternoon show and Paul met me there as we stayed on site in Gladys our motor home. The Military Odyssey Show is a fascinating spectacle as it’s a multi period event and covers everything from Romans, Medieval right up to Vietnam and beoned. There is always much to see and because it mixes periods I think it’s just that little more interesting than a show which just covers one period. Often the re-anacters who specialize in older historical periods have skills. One man we saw in the iron age village was making fishing nets and you could see the ladies weaving fabrics. I also like to see the uniforms of the 18th and 19th centuries of which there were many groups. At one point I’m sure I saw a whole crew of pirates walking by while I was singing “Anchors Aweigh” during my US WAVES show.

This weekend we were lucky with the weather although I have to say it was quite windy up on stage. A big thank-you goes out to Graham, Mick and the 514th who had built me a special stage up on top of a flat-bed trailer. Much of the time I had to swap my vintage looking 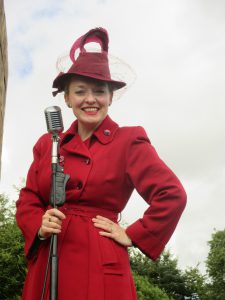 for a radio mike due to the fact the radio mike has a wind cover and the vintage mikes were picking up too much wind noise. Come Sunday we needed our macs as we had a few showers and I was able to wear my new red coat and hat.

No history show would be complete without a look around the stalls and I was thrilled to see Jennifer Coverdale of “Jenspick” who always has a wonderful selection of 1940s hats and girlie bits. She also had a beautiful red coat and grey suit which I thought would be perfect for my trip to Milan this October. The red coat and hat I bought came in very useful for Sundays show when the weather turned a little colder and now I’m busy planning what to sing and what to wear for the Victory show which will be taking place next weekend on the 3rd and 4th September. 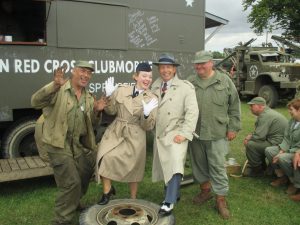 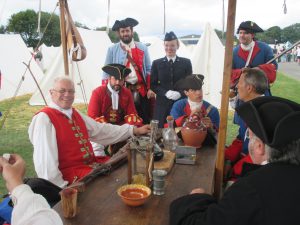 I’m out all this week with shows and yesterday I had to dash back from Odyssey for a 3pm 1950s and 60s show I sang at a BBQ party in High Wycombe. I’m performing in Northampton this afternoon and Milton Keynes tomorrow so I’m afraid I will only have time to do one blog again this week. You can catch me performing 3 x 45 minute shows daily at the Victory Show Saturday – 11.30am ATS, 1.30pm US WAVES, 3.30pm Hooray for Hollywood. Sunday 11.30am WRNS, 1.30pm WAC, 3.30pm WAAF.

In the meantime I had my first singing lesson last week with a wonderful new singing teacher and I’ve been shown a new tecknek which has helped with my vibrato although in Operatic circles they don’t like to use the term vibrato – it’s resonance, (which makes me smile).

I must dash and get ready for my show. Keep Watching and Toodle Pip!